To wrap up our look at the best loved Jane Austen adaptation of our time,the 1995 Pride and Prejudice miniseries which was a prime time feature on PBS' Masterpiece series,The Complete Jane Austen,I thought it would be fun to highlight a few of the less prominent players in this story whose contributions to the plot and to the development of the leading man and lady's character,key to enjoying this timeless tale of love and honor.

I know that's become fashionable amongst many to champion the cause of Mrs. Bennet,the ever worrying mother of the Bennet girls who faces a real challenge of the time period in getting any of her daughters well married before the death of her husband and the entailment of his estate leaves the lot of them in the lurch.

However,the woman works on my nerves(as much as her own always seem to be)and she does her girls no favors with her hysterics and pushy behavior in public,giving off some very bad first impressions in deed. Therefore,I much prefer the company of Mr. Bennet and find him to be my favorite father figure in Austen's cannon.

His wit and good humor,along with an appreciation for sensible thinking,are not the only things to recommend him. His strong and loving relationship with Elizabeth is what really endears him to me. Many fathers in that day and age might've treated their daughters as a chip off the old block but a good many of them would've made her marry Mr. Collins just to keep the peace in the family. Also,when Elizabeth's engagement to Darcy is announced,her father has a serious heart to heart talk with her about her real feelings on the matter-"let me not see you be unable to respect your partner in life"-such love and concern combined with wanting a better married life for his daughter is touching to see.

Mr. Bennet is not without his faults-his sharp wit towards his wife and three younger daughters cuts too close at times(Jane and Lizzy are his only girls to avoid bearing the blunt of his snarking most of the time)and his lackadaisical approach to life is partly to blame for Lydia's wild romp in Brighton. To his credit,he does acknowledge his guilt in these matters(plus,he credits Elizabeth for trying to give him a heads up well in advance)and is determined to do better in the future or until Kitty runs away,which ever comes first:

Nevertheless,I still honor and respect Mr. Bennet as one of the better paternal figures in the literary sphere. In some ways,he reminds me of my own father,who passed away a few years ago. He didn't retreat to a home library but he did have an art studio that was as much his private domain as Mr. Bennet's book room is to him. I'm sure that the two of them would get along famously. 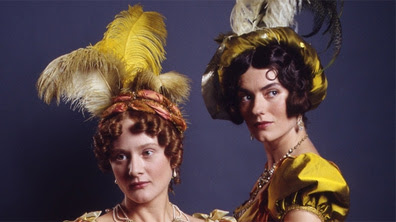 The snobbish sister of Mr. Bingley,teamed up with her married sister,Mrs, Hurst,is a classic example of a "frenemy"-a woman who sneeringly professes to find Jane Bennet a "dear,sweet girl" yet can not resist any chance she gets to badmouth her and her family behind closed doors. Her main object in life is to ensnare the affections of Mr. Darcy(a worthy goal indeed)yet she doesn't recognize the fact that her cattiness towards others is what truly makes her unattractive to him.

Elizabeth becomes her main target of derision,since Miss Bingley is sensible enough to see her as a rival for Darcy's attentions. Lizzy finds her to be just as repulsive as Darcy does at times but is more open about her dislike,especially during the Netherfield ball when Miss Bingley's "kindly meant" comments about Wickam rub her the wrong way:

The fact that Miss Bingley turned out to be right about Wickam does her no credit,since as Lizzy rightfully points out that her main opposition to him is due to his parentage. I have no doubt that Miss Bingley did eventually find someone to marry but most likely,her spouse was only a step or two above her sister Hurst's dull drunkard of a husband. Poor Miss Bingley.

Proof positive that the Bennets do have some relatives with sense and decorum,even if they live in Cheapside(a very good recommendation for that nieghborhood is their residing in it),Aunt and Uncle Gardiner are very welcome visitors indeed. Their helpfulness and attentiveness towards the needs of the eldest Bennet girls to venture outside of their small society shows them to be good role models and proper guides for young people to experience life in a wholesome way. Too bad they couldn't have attended Lydia in Brighton!

Inadvertently,they become cupids to Lizzy and Darcy's romance,by having the good fortune to visit Pemberley with Elizabeth in tow just as Darcy arrives back home but not before Darcy's housekeeper gives the party a tour of the place and confirms his character to be much better than previously supposed:

He's right up there with Uriah Heep in the Top Ten list of fictional toadies,with his endless preening over the priviledge of being patronized by the "right honorable" Lady Catherine De Bourgh and his fickle devotion to any other woman on the planet. After all,he only courted Lizzie after hearing that Jane was taken and not long afterwards,did he propose to Charlotte Lucas when Lizzie flatly refused him. Way to take one for the team there,Charlotte!

With his exaggerated pompous airs,his need to "flatter himself" and his complete lack of a sense of humor,or true social graces, Mr. Collins turns out to be more of an object to be pitied rather than derided at times:

Even with his eventual inheriting of Longbourn,it is hard to imagine that Mr. Collins would ever truly part from the side of Lady Catherine and Rosings. No doubt,a caretaker would be hired to keep track of the estate. Perhaps Charlotte finds an excuse to visit the place and encourages him to stay home to see to Lady Catherine's wishes(and is successful in that as she is in encouraging him to spend time in his garden and walk to Rosings every day). If awards were given out to those who devote their life to keeping such a foolish fellow out of real mischief,Charlotte Lucas Collins deserves to be first in line.

It would be a rather risky undertaking of any observer of P&P to not give Her Ladyship her right and proper due to this story-she must have her share of the conversation! Her arrogance,her overbearing nature and her determination to always be the center of attention and the perceived fount of wisdom and regard is vast enough to fill all of Rosings Park and Pemberley to the brim with noxious fumes to pollute them both creditably.

Her best moments of fury occur when she clashes with Elizabeth-it's not hard to see where Darcy gets his taste for forthright women from-and the big confrontation at Longbourn is one of the most loved bits of the book and any film version of P&P. Upon hearing about Jane's upcoming nuptials to Bingley and the rumors that Lizzie and Darcy may follow suit,Lady Catherine insists on calling Elizabeth out to explain herself.

I've always thought of it as a duel fought with drawn swords. Lady Catherine throws down the gauntlet,so to speak,by showing up uninvited and having their conversation out of doors. Lizzie is more than able to parry and thrust her wit and indignation towards this direct assault and the battle for Darcy is as tense as any in Kill Bill,volume one or two:

Perhaps Lady Catherine was able to reconcile with the Darcys and accept their wedded bliss. If not,she certainly was the poorer for it.

We'll have to wait awhile for another Austen installment from PBS,as the Andrew Davies adaptation of Emma will be broadcast on March 23. It's definitely worth keeping your patience for,since it is ,in my opinion,one of the best versions of Emma ever made.

Part of that is due to the delightful cast,with Olivia Williams(seen most recently as Jane Austen herself in Miss Austen Regrets),Samantha Morton as the hapless Harriet Smith and Kate Beckinsale as Emma,teamed up with Mark Strong who makes the perfect Mr. Knightley for her:

A truly enjoyable series to watch, and a wonderful book to read- Love Jane Austen!