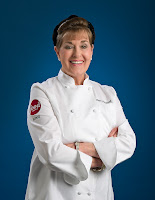 When you write about real life people,especially celebrities, online,the last thing on your mind is "What if So-and-so reads this and what will he/she think?"

I've been lucky in that regard,having nothing but positive feedback from many of the writers who've been interviewed and/or profiled at LRG but getting a response from someone who you otherwise would have no connection to other than watching them on TV is a real "I have to sit down" moment of pop culture clarity.

Kerry Vincent,one of my favorite no nonsense culinary judges from Food Network Challenges(mostly in the cake events),did send me an e-mail after the first time I wrote about her to thank me for comparing her with the likes of Jeffrey Steingarten and Anthony Bourdain(plus she liked my nickname for her,Professor McGonagall). Most recently,she left a comment at a post I did last June talking about her stint as the "mystery client" for an infamous FNC episode and even offered me a few pictures to showcase as well. 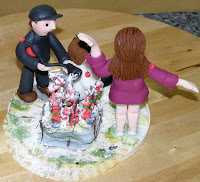 That FNC was themed "Birthday Surprise" and one of the chefs chosen to make a birthday cake for Kerry was Stevie Falmulari,a food artist who often clashes with Kerry's style. Her cake for Kerry was not only the most bizarre thing I've even seen on FNC but had to be hosed down after it was set on fire. 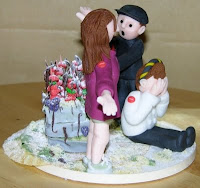 That was one of the most talked episodes and it inspired someone to make a fitting sugar figurine recreation of that crazy cake caper,which Kerry was kind enough to send me these two photos of that you see on the right and left.

The maker of this amusing tableau is unknown,a real shame since Kerry found this to be charming and would love to send them a note(if anyone knows who did,please let her know.) I think it's incredibly cute and a rather accurate account of that bizarre birthday cake bonanza,if you ask me:

I did get a chance to ask Kerry how the winning cake,made by Jason Ellis,tasted and she did say that it "wasn't too bad." She also mentioned that,out of politeness,she and her husband had a very small taste of Stevie's cake(which was as about pleasant as the outside of that thing looked)and even sent Stevie a thank you note.

Jason Ellis' cake(the photo of which I found on my own)was lovely and the best bit about it was his attitude towards creating it. Jay had been judged by Kerry before in previous challenges and knows how high her standards are. With that in mind,he set out to make a cake that would not only satisfy his client but prove that he was capable of refining his pastry talents as well:

Also included in the batch of pics from Kerry was a Halloween doppelganger version of her,courtesy of the good folks at the Pink Box Bakery who have been competitors in a couple of FNC cake episodes as well.

Imitation is the sincerest form of flattery,as they say,and in this case,it was also the sweetest. Discovering all of these amazing cake artists out there who work wonders with sugar,chocolate and fondant is a major benefit to watching shows like Food Network Challenge and culinary contests of that nature. You won't find such tricky to make treats at your average Halloween or any other holiday party,that's for sure:

My heartfelt thanks to Kerry Vincent,for allowing me to share these photos with my blog audience and for taking the time out of her busy schedule to acknowledge my little corner of the pop culture world.

I also appreciate her being a good sport about being deemed Professor McGonagall. Maggie Smith is one of the best actresses that Britain has given us over the past several decades and I bet I'm not the only one who sees more than a slight resemblance between these two ladies(separated at birth,perhaps?).

One trait that they do share in common is grace under pressure and a true sense of substance with style. That alone makes both Maggie and Kerry simply the best in what they do and offer up to their respective artistic communities:

Thank you yet again.. I love the homage to the magnificent Maggie, she was, and still is, amazing and to me a living legend; and the rest of those power house actors with her! Oh my. Dench another stellar favorite -- that clip bought tears to my eyes. I watched it four times. Few of the current crop of actors can match those performances.

Maggie is even wearing a headband -- who would have thought?

I will tell the others that you have showcased to pop by and visit.

I don't have the words to say what I think.

Thank you for featuring me.

Love the blog entry! It was a hoot to see several people dress up as Kerry for Halloween, wasn't it? She's definitely become a pop culture icon.

I'm glad you liked the post,Kerry-that Maggie Smith clip was a real find and I thought of you when that headband moment came up:) Thanks for spreading the good word about my blog,it's very much appreciated.

Hi,Rebecca-thanks for the love and yes,it is cool to see Kerry Vincent become a Halloween sensation,indeed.

Thanks for including us in your blog! Our staff has a great sense of humor - and luckily so does Kerry :) !
Anne Heap, Pink Cake Box

I'd send it to Cake Wrecks and see if they could find out who made it on one of their Sundays. Great cake post and congrats on garnering her attention!!! Very neat!

Just happened on your blog while one of the Food Network Challenges is on and was curious about Kerry online, so I googled her name and your blog popped up. What a fun blog!
I think Kerry is great at what she does and is a great, honest judge. Can't wait to browse around and read more of your stuff.

Hi,Katrina-thanks for reading and hope you stick around,the more the merrier,as they say:)

Anna,you're very welcome and I love those YouTube clips of your bakery. Very savvy of you guys to have your own web channel there.

And thank you as always,Lady Tink,for some very good advice and patronage.