Just how ladylike was Jane Austen?

With this being Banned Books Week,my thoughts can't help but turn to one author who has so far escaped the censor's glare(and who I hope will continue to do so) and that would be Jane Austen.

As much as I detest book banning, it does irk me slightly that Jane does get quickly overlooked by those looking for literary trouble. She's easily dismissed as "safe" and "moral",with romance plots that end happily in marriage. Most people,who only know Austen from afar, have no idea of how truly wicked and wild she can be and I'm not talking about any of the modern day versions either.

While Austen's works do provide some food for thought concerning good manners and possibly a few life lessons, her books were never intended to be morality tales(and that goes for Mansfield Park as well!),rather provocative portraits of the world as she knew it. After all,there is a reason that the poet W.H. Auden declares that "next to her,Joyce seems as innocent as grass"!

One person who appreciates this most about Jane Austen is Andrew Davies,the modern day adapter of  Pride & Prejudice(which gave us the joy of Colin Firth's wet shirt scene),Emma,Sense & Sensibility and Northanger Abbey.

I was privileged to meet him,along with the rest of my Republic of Pemberley friends during our trip to England many years ago and his sense of humor regarding Austen's novels relishes the sensual nature of her subplots. While he is very faithful to the source material,many of us do enjoy his method of tweaking the hidden passions of the characters there.

Take S&S,for example, where a secret engagement and a ruthless seduction that leads to unwed motherhood are major turning points for the two key story lines of our Dashwood heroines. Davies was bold enough to mix those intrigues right into his 2008 version,beginning with Willoughby's thoughtless pursuit of his own pleasures:

He takes a similar tact with Northanger Abbey,the one book that readily lends itself to the darker side of a young woman's fancy. Think about it;it's no coincidence that naive Catherine Morland and her supposedly more worldly new gal pal Isabella Thorpe are into Gothic novels which have plenty of hapless females being kidnapped by mysterious strangers and bizarre situations to puzzle out.

Austen herself delighted in many of the books she had those girls read while in Bath,including Ann Radcliffe who many modern readers are surprised to learn was a actual writer of the time.

Not to mention that some of her favorite novels were considered particular shocking for a gentlewoman to read like Tom Jones or Samuel Richardson's Clarissa(altho she did prefer Sir Charles Grandison). Like many readers still do to this day, Jane and her fictional counterparts liked to live vicariously through fiction where the repercussions of being a bad girl couldn't directly affect them:

And now we get to Mansfield Park,a book that even the most ardent of Austen admirers have trouble with. Fanny Price's low key manner doesn't engage as many readers as does  the vampy yet vibrant personality of Mary Crawford,not to mention the shameless ladies' man vibe that her brother Henry gives off there.

While I strongly dislike the 1999 Patrica Roxema film version of the book,I will credit her for getting one thing right and that is the open door to secret love trysts that the young folk at MP gamely entered during their rehearsals of Lovers' Vows.  To paraphrase Fanny,by the time Sir Thomas had come home from his business trip,everything had gone quite far enough indeed!

There are also a good number of love triangles in MP,starting with Henry,Maria Bertram and her sister Julia,then going to Henry,Maria and her intended husband Mr. Rushworth with the most hidden one being between Mary,Edmund Bertram and Fanny-how is this book dull,I ask you? Granted,I am a tad biased as I'm currently writing a version of Mansfield Park with vampires(I think you can guess who the blood suckers are going to be!) but there is more than enough bad romance to go around for anyone eagerly searching the pages for to be agreeably engaged in: 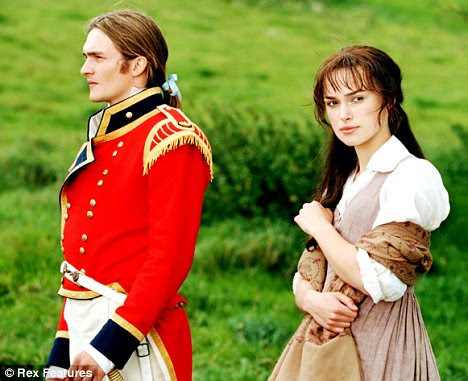 All I'm saying is that Jane Austen did indulge in a few wicked wonderings in her work and while her leading ladies did manage to avoid getting entangled in the consequences of unbridled passion, her novels weren't merely prim and proper fairy tales.

It just shows how unimaginative the book banners are,that they have no idea of the secretly subversive nature of Jane Austen. With any luck, they never will and we can all share sly smiles behind our copies of P&P. As much as we love her admirable men and women, it is rather apparent that Jane did have a fondness for the bad girls and especially the bad boys of her books: