The LRG Pop Culture Resolutions for 2014

With the eve of a new year almost upon us, the time for making plans and resolutions for the next batch of months is at hand.

While most of those vows tend to fall by the wayside before the end of January, some are kept and in order to keep myself on the straight and narrow,here are the pop culture related resolutions I'm making for 2014. Some are simply reading choices while others will be part of the post roster for this blog,so I hope that a couple of them are interesting to my audience as well: 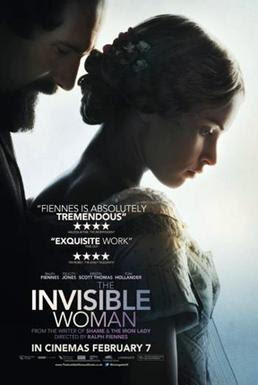 One of the late in the game movie releases this season is The Invisible Woman,starring Ralph Finnes as Charles Dickens and Felicity Jones as Nelly Ternan,his actress mistress.

Their secret romance is considered to be an influence on his later works such as Great Expectations' Estella and many still debate on how far it actually went. The film is based on literary biographer Clare Tomalin's book,which I have on hand and am determined to read to the end before the year is out.

I also have a copy of her full fledged biography of the man(a very lovely Christmas gift from a good friend) and will take that one up in my regular reading as well. Since the film is already in limited release, going right to the source seems the best bet there.

Tomalin is an excellent writer in this field and her bio of Jane Austen,which is in my personal JA library, is one of the top books that any Janeite would recommend.

The film version of The Invisible Woman has gotten mixed reviews but folks into Dickens are it's target audience to begin with and while it might not garner a strong number of Oscar noms, all of us will benefit from renewed interest in this talented yet flawed artist of his time who still speaks to readers today:

GABALDONING ABOUT: Most of us diehard readers have a book that travels with us for those long trips or long waits for various appointments. I called mine my "purse book" (because that's where it stays until I have a small journey to make) and since I prefer paperbacks for that particular function,the current literary honoree is Diana Gabaldon's Outlander.

Since it has a lively pace and quick flowing action,it's a perfect choice for those times you have to sit and wait. However, I have more of a need to finish this novel regardless of destination due to the cable channel Starz turning this series into a miniseries for the summer of 2014.

Fans are naturally excited and I do have at least four other books in this time travel saga set in the Scottish highlands of the 17th century(there's seven books total,plus a spin-off series and several short stories),so catching up in time is essential. Maybe by the time the series airs, I'll be able to pronounce "Sassenach" properly:

FANNY PRICE PRIDE: For Jane Austen admirers,2014 is a year of celebration as it happens to be the 200th anniversary of the publication of her third novel,Mansfield Park.

While MP does not get the love that Pride and Prejudice or Emma does, I am in no doubt that many engaging discussions about this highly debated book will be held in many a Janeite circle. Adding to that talk will be some promotion for my upcoming ebook entitled Fanny Price,Slayer of Vampires.

For those unfamiliar with MP, Fanny is the meek and mild heroine of the story who is overshadowed quite a bit by Mary Crawford,the sleek and stylish rival for the heart of Edmund Bertram(and yes, he is Fanny's cousin but that was considered the norm in those days). I intend to remedy some of the ill will towards Fanny with my tale of terror that has a fang in cheek approach to the story.

My take on MP is told in epistolary manner,as a modern day descendant of the Bertram family in America discovers a secret stash of letters that Fanny wrote to her Naval brother William but never sent or seen until now.

The growing pile of correspondence chronicles Fanny's discovery that their new neighbors Henry and Mary Crawford have a thirst that no wine can quench and can be even more of a daily terror than a visit from her cranky Aunt Norris.

Armed with a special keepsake from a long deceased relative and a very useful book, Fanny must fight to protect her loved ones from giving into the blood lust inspired by the set of sinister siblings in their midst.

I plan to release Fanny Price,Slayer of Vampires in February of 2014 and will have a pre-order party here at LRG,plus a giveaway item that should be fun for both Austen fans and vampire enthusiasts alike. If you're interested in updates, they will be available at my Facebook page called The Austenite Adventures, where I also highlight my ebook short story,The Austen Avenger. Even if you're not into Mansfield and it's ways, I think that the bad romance aspects of the plot might intrigue you and staking a few vamps in Regency style does have it's charms:

A YEAR OF FREDDY FEAR: Another entertaining anniversary that genre fans will enjoy is the one for the release of Nightmare On Elm Street,which debuted 30 years ago into movie theaters and made it's dream demon villain Freddy Krueger(played by the awesome Robert Englund) a household name in horror.

As a big NOES fan myself who received an eight pack of  the franchise that Wes Craven beget(and left and then returned to for one last time) under her Christmas tree, I have decided to do a year long salute to these films with what I'm calling "A Year of Freddy Fear."

All of the NOES films that star Robert Englund will be featured in a once a month post(including Freddy Vs. Jason),starting with the first one in January and since my focus is all about Freddy, four other Englund fright flicks will be showcased-Phantom of the Opera(this one is not Broadway bound,that's for sure!), The Mangler, 2001 Maniacs and Jack Brooks: Monster Slayer.

And no, I am not including the 2010 remake into this since I sat through that unholy mess once and that was more than enough. Nothing against Jackie Earle Haley for his turn in the Freddy finger blade glove but it was truly an unnecessary movie to make.  I will be doing Bad Movie Month in August as usual but the Year of Freddy Fear won't interfere(pun sort of intended) with that. Let's all try to stay awake here,kids!:


Whether or not you make any resolutions for 2014, I wish all of you a healthy and happy new year in pop culture delight. Tune in tomorrow for some New Year's party tunes and in the meanwhile, try not to pick on your friends for making the same old promises to change for the better this year. Who knows, they might succeed with a little support and less scorn: