Top Chef goes for a motherly approach,Agents of S.H.I.E.L.D. set up a cliffhanger and Sleepy Hollow has another Sin Eater adventure

Top Chef had a very caffeinated start-off this week,as Humbert Keller stopped by to introduce the Quickfire concept. He also stuck around for the Elimination challenge,which we'll get to in a moment.

Meanwhile, everyone had to make a dish that incorporated coffee,Dunkin Donuts brand to be precise, and ten grand was also on the line along with immunity for the next round.

Shirley earned that victory with a coffee glazed tenderloin served with garlic puree. Then,actor Anthony Mackie arrived to announce the main challenge which was making a dish that reminded you of home(aka,just like Mom used to make).

Mackie,Keller and the other judges were to join legendary NOLA chef Leah Chase(who made an appearance earlier this season) and several of her family members for the meal at her restaurant Dooky Chase.

This was a hard challenge to judge,since most of the food was excellent with little cause for complaint.

Stephanie made the Top Three with her mussels that had spicy pickled peppers and tomatoes,a taste combo new to Judge Tom who really liked it.

Stephanie's fondness for mussels comes from hunting for them with her boyfriend and certainly all the diners that night fell in love with her food.

Carlos also wowed the crowd with his conchinita pibil, pork shank with black beans and a corn tortilla. It really seemed to hit the spot for the judges and the special guests.

However,the dish of the night belonged to Nicholas. He was rather choked up as his plate of ricotta gnudi was presented,since it's a favorite of his daughter's and he has been missing his family very much so during the competition.

Not only did he win, Anthony Mackie claimed the dish was so good that he wished he was Nicholas' daughter! Nice win and compliment there!

The Bottom Three contenders really had minor details off with their food,with Brian's steak not having a strong enough sear for flavor and Justin not adding enough gravy to his rice.

Travis did have a bit of a real problem with his biscuits and gravy. While the maple sage sausage gravy and the sour plum jam on the side turned out nicely and went well together, the biscuits were raw in the middle.

That got him shipped off to Last Chance Kitchen and while he did have his ups and downs here, I've seen worse TC contenders overcome less. So,good luck Travis and we're actually getting a new episode next week of Top Chef as so many other shows are taking their holiday break.

One of those shows going on a break is Marvel's Agents of S.H.I.E.L.D., who set the stage for a major shake-up as Coulson wound up being the one traded to the bad guys instead of super powered Mike(why can't J. August Richards stay on this series,why?).

Seems the villains are interested in finding out how Coulson came back from the beyond,which is something he'd like to find out as well. With Melinda May and Ward giving off tentative relationship vibes,plus Skye moving closer to discovering the truth about her parents, a number of good plot points are beginning to link up here.

However, it's going to take some major league movement to rev up the momentum by the time that the series picks up again in January. I just hope that it's not too late for these heroes to have their audience save the day(or ratings,in this case) in the nick of time. Even with intriguingly quirky bad guys making their presence known, these agents might need a real hero on board : 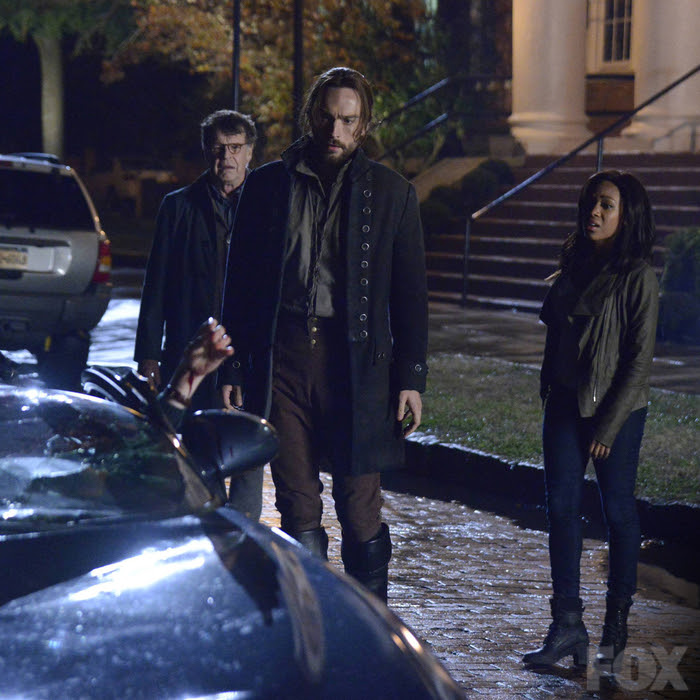 Sleepy Hollow will have their first season finale in January and season two(which has a 13 episode run) will air later in 2014.

This last episode had a bit of a Christmas theme(love that Abby gave Crane a stocking to hang up) but more importantly, brought back Sin Eater Henry Parrish as an ally in reaching Katrina.

Crane's sorrow in slowly learning the fate of his son was heartbreaking to see and having Parrish along for the ride was a good choice. He offered a sensible level of gravitas and regret that paired well with the emotional comfort and resolve that Abby had on hand there.

This series looked like it was destined to be a big joke at first but it certainly has come a long way,baby. I'm glad that those in charge kept to their guns about having a short run and am very happy that I gave this show a chance. Hopefully,at some point, Crane will get an opportunity for a good time as well, he certainly has earned it!:

CUTTHROAT KITCHEN: Another season of this competitive cooking series is set to air and with the pickings for fresh shows getting slim by New Year's, this is one you may want to try.  Plenty of sharp and snarky twists and turns await you and the chefs who dare to enter this culinary arena and yes, this ain't your daddy's Iron Chef!:

I share your hopes for SHIELD, although (for me) it's really more for Whedon's and Gregg's sake than anything else. The airwaves also need stuff that's not a reality show or a music/dance competition.

While all Joss Whedon series need some time to find their legs, this one has been very mixed in giving us reasons to be engaged with its leads, and to give us fun action scenes with interesting bad guys. They've had some signs of life here and there, but they really need some B+-level episodes, and soon.

Sleepy Hollow, I feel, is one of the standout hits of last year. That it combines good horror with great characterization is an impressive feat, even more so because the premise is just bat-s--t insane. I am both proud and impressed that they made this series work!