As we get closer to the end of the year, the good folks in Hollywood rush to release as many "quality" films as they can in order to qualify for the big awards season that begins in mid-winter.

While plenty of these movies are respectable in both content and entertainment value, one can't help being slightly cynical about the timing of their theatrical runs. However, it's not the fault of any of these flicks about such obvious preening for prizes so let's take a look at a few trailers that are definitely being earmarked for Oscar consideration and give them a fair shake there:

THE THEORY OF EVERYTHING: Eddie Redmayne stars as a young Stephen Hawking, whose keen intellect is already winning him acclaim and whose romance with Jane Wilde(Felicity Jones) is a huge plus in the emotional column there. His rising star becomes threatened as the rare physical illness that drastically changed his health and life begins to take over. With the support of Jane and others, Hawking manages to make his considerable mark on the scientific world.

There are a lot of reasons for this to be seen as prime Oscar material; based on a true story(for the early part of Hawking's life at least) overcoming physical challenge and most of all, British. The film is already getting some good word on the film festival circuit and should earn more praise upon it's worldwide release.

However, there is more to this than meets the eye.  Redmayne is an excellent actor who has been seen in mostly supporting roles, even in My Week with Marilyn which earned his leading lady Michelle Williams an Oscar nom.  Felicity Jones is also a wonderful actress who American audiences may soon see as Black Cat in the next Amazing Spider man movie(plus, has played a Jane Austen heroine which gives her double bonus point in my opinion) and this movie could be a major break out moment for them both. Jones and Redmayne are truly talented and it would be nice for them to get the acclaim they deserve:

THE IMITATION GAME:  This look at the team that cracked the Nazi's Enigma Code during WWII focuses on group leader Alan Turing(Benedict Cumberbatch), whose cool demeanor made it difficult for others to work with him.

Despite his temperament, Alan bonded with his crew of off beat brainiacs and helped out the war cause tremendously with their work. His reward for that was a ruthless prosecution for "gross indecency," due to his admission of being gay which was once a capitol offense in Great Britian.

As with Theory of Everything, this film also has similar favorable qualities in gaining Academy Award preference what with  it's true story setting and dealing with prejudice of a bygone age(which in some respects is sadly still with us today). The cast is made up of a strong amount of prime British talent such as Keira Knightley, Charles Dance and Mark Strong. Yet, many of Cumberbatch's fans will be fervently hoping that this role gets him a Best Actor nod and who knows, it may very well do that:

WILD: Reese Witherspoon is already receiving Best Actress buzz as the lead in this adaptation of Cheryl Strayed's memoir of her solo trek across the Pacific Crest Trail. This soul searching quest to clear her mind and spirit was a widely heralded best seller and with Nick Hornby as the screenwriter, it should translate very nicely to the big screen.

Witherspoon is also the executive producer,so this being a star vehicle for her is no big surprise. While I'm not drawn to stories about folks going on a walkabout, I do give her credit for taking on a role that promises to test her real limits as an actress there. Witherspoon does want to be taken seriously and if this film helps to achieve that goal, more power to her there:

BIRDMAN: Michael Keaton is not claiming that this movie is a comeback but plenty of people are,nonetheless. Keaton plays Riggan Thomson, a former star of a comic book film franchise who is preparing to return to the limelight as the lead in a Broadway show.

The story is filmed in numerous long takes and made up of a stellar supporting cast that includes Edward Norton, Emma Stone and Naomi Watts. While Keaton says that none of his Batman experience drew him to this part(and I do believe him on that), comparisons will be made and Best Actor talk is going on as we speak.

Birdman does look like an interesting movie with it's own weird sense of style, something that frankly mainstream films could use right about now. In addition to Keaton being considered for Oscar honors, writer/director Alejandro González Iñárritu should also reap some of the benefits of this indie crossover film's potential success as well: 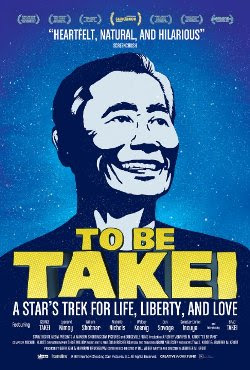 There will be other films that get Oscar talk going but I would be greatly surprised if any of these four are not in major contention. This doesn't mean that movies released earlier this year will be ignored completely but cinematic followers know all too well the impact of recent exposure for possible award nominees.

I do also hope that certain smaller movies don't get lost in the shuffle such as Belle(which I saw recently on DVD and it was marvelous) and To Be Takei, a heartfelt documentary about cult actor George Takei.

His journey from unjust internment during WWII here in the States to science fiction icon and outspoken defender of LGBT rights is a fine example of American spirit and to see him on stage with an Oscar would be a grand moment in entertainment history. Oscar does favor the underdog at times and for a film like this to be nominated and win would be the ultimate Hollywood happy ending: