Have yourself a rockin' Christmas Eve!

It is the day before the night before Christmas and since plenty of us will be busy come this time tomorrow, I thought it would be best to set up my annual holiday jukebox list today.

This year's theme is inspired by a Twitter post,oddly enough(yes, I have succumbed to the dark side and signed up for Tweety Bird Land,@deathadderdiva) that asked the question "which song do you hate more-"Jingle Bell Rock or Rocking Around the Christmas Tree?"

While I didn't answer, my response would be "Neither! I like them both!" Granted, any good song can get annoying fast if in constant replay,especially this season ,but some tunes are worth waiting all year for the right time to rock the night away. So, here's a Rocking Christmas Eve playlist for your party hop to get their groove on to:

DECK THE HALL & OATES: My favorite version of "Jingle Bell Rock" is from the eighties, with John Hall and Darryl Oates giving this mellow melody a nice laid back edge. The video for it is delightfully hokey and look for SNL music man G.E. Smith as a holiday reveler: 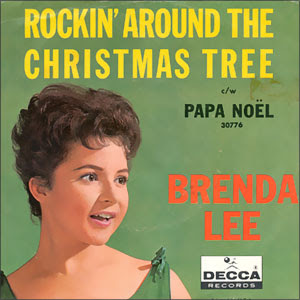 There are many cover versions of "Rocking Around The Christmas Tree" yet the first one is still considered the best. Brenda Lee was thirteen years old when she recorded this song back in 1958 and it's become one of her signature numbers.

You can actually hear some of it in the background of the TV holiday classic special Rudolph the Red Nosed Reindeer and most of the younger generation know this song from the movie Home Alone. No matter how or where you know it from, this is a real toe tapper of a holiday song:


SISTER SEASONAL SELECTIONS: My sister Stephanie is more of a music person than I am, so I asked her for a couple of choices here and her top picks include Iron Maiden's lead singer Rob Halford's recording of Christmas carols such as "Oh, Holy Night":


Also, she chose a true favorite of hers, singer Jonna Lee, a Swedish performer best known for iamamiwhoami, with her cover version of the Mariah Carey contemporary classic "All I Want for Christmas is You":

GIFT 'RAPPING: A contemporary classic I love to listen to is Run DMC's "Christmas in Hollis", which made it's debut on the original A Very Special Christmas album and is one of the memorable tunes from the first Die Hard movie.

I plan to watch Die Hard this holiday weekend(hey, the story does take place during a Christmas party, after all) and while it may not seem like traditional fare, that movie certainly makes the season bright:


LITTLE DRUMMER GIRL:  I was pleasantly surprised to find that Joan Jett, a true rock n' roll diva, has a holiday song in her roster. Her take on "The Little Drummer Boy" is a thumping good time had by all indeed:

With that, I wish you all happy holidays,season's greetings and may you spend this occasion with those you love and care for.

I'll see you good folks after Christmas and before New Year's Eve, so enjoy those parties yet try to keep the music down a little and pass the eggnog and cookies around as much as possible: