Shaking off 2014 with a party pleasing dance mix

The last day of 2014 is finally here and I think it's safe to say that a good number of us are more than ready to have this year over and done with. To be fair, there were some fun things that happened this year and what better way to celebrate that than with a song and dance?

Plus, to add a little pop culture perspective, I've paired each of these musical selections from this year with one from the past that compliments it, one way or another. So, if you're looking for song choices for a New Year's Eve bash or just relaxing your way into 2015, here's the LRG 2014 Musical Look Back:

The acceptance movement for large ladies got a sweet spot on the charts as Meghan Trainor cheekily showed off all of her right curves in all the right places with her snappy single "All About That Bass". While we did get several salutes to bountiful booty this year, Meghan's wink and a nod of confidence set her apart from the crowd with a beat that you did want to dance to:


A few years earlier, Mika offered up a charming tribute to plus sized gals with "Big Girl(You Are Beautiful)" that this big girl still finds to be a great toe tapper: 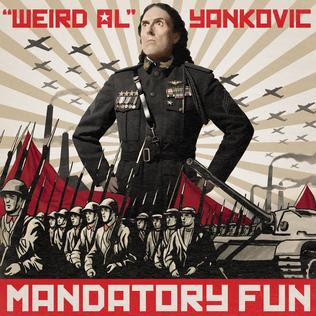 HAVING SOME MANDATORY FUN:

A great burst of comic relief came from Weird Al Yankovic, who wonderfully overwhelmed us with tons of videos from his new album Mandatory Fun. From parodies to original songs, he gave old fans and new plenty to laugh about.

Picking just one song was so hard but I had to go with "Word Crimes" as this tune teaches and/or reminds us about those rules of verbal style that have become rather slack in our age of text talk:


Choosing just one song from Weird Al's vast vault of humorous hum-alongs was just as difficult but since we are getting a new Star Wars, it's best to recall how "The Saga Begins":

GROOVING ON THE GUARDIANS:

A major summer surprise hit was Marvel's Guardians of the Galaxy(which I caught up to on DVD and it's truly marvelous) and it's too bad that there is not an Oscar category for "Best Use of a Previously Existing Song" because this movie would totally sweep that section.

One of the many old school classics from Peter "Star Lord" Quill's Awesome Mix was Blue Swede's "Hooked on a Feeling"that actually rock the Billboard charts for awhile this year, due to the trailer for TGOTG alone. So looking forward to the sequel and the melodic memories that it will bring back to audiences everywhere:

With the movie Clueless getting a little bounce in 2014, due to Iggy Azelea's "Fancy", I thought that taking a tune from the original Clueless soundtrack would be ideal. Also, Kim Wilde's "Kids In America" is something that I do believe the Star Lord himself would get down to:


Happy New Year, one and all and I'll see you back here soon at LRG. In the mean time, don't despair about your favorite pop culture fandom followings coming to an end, due to that last movie or TV show airing. These things do have a way of returning, sometimes for the better: