With tonight's debut of a new production of The Rocky Horror Picture Show (subtitled Let's Do The Time Warp Again), I am in the mood for some Halloween themed party music and what better place to look than soundtracks from scary movies?

Granted, most fright flicks don't lend themselves to the kind of music that gets your toes tapping, more like keep your feet moving as fast as they can away from the masked man with the chainsaw there.

However, I did manage to find a few selections from certain film soundtracks that certainly would create the right atmosphere for dancing the night away. I must warn you,tho...this list is rather vampire film friendly. Seems that those children of the night are the best ones to set up a dance floor:

LOST IN THE SHADOWS: Granted, the Lost Boys soundtrack may be a mixed bag of musical goods at best, however there are several lively tunes suitable for getting your groove on, dance wise.

My personal favorite is Lou Gramm's "Lost in the Shadows" as it really feels like the true theme song of the movie. A audio blend of driving pulse with moody goth style lyrics, this song sets the tone of any All Hallows Eve celebration nicely.

It's been said that The Lost Boys was one of the inspirations for Buffy the Vampire Slayer(lead vamp David does look a lot like Spike) and this tune certainly would be on the playlist at The Bronze, no doubt about it:

GIVE IT UP: Speaking of eighties vampires, Fright Night could be seen as the East Coast companion to Lost Boys(yes, I know that it came out a few years earlier), with it's take on modern teens running a foul of old school bloodsuckers.

While it wasn't as MTV friendly as TLB, one of the best scenes in Fright Night is strictly musical. Innocent bystander of a girlfriend Amy happens to resemble a lost love of lead vamp Jerry and while caught in a local nightclub, Jerry lures her onto the dance floor.

Evelyn "Champagne" King's song "Give It Up" is note perfect background music for this sinister seduction, mirroring the sexual tension and terror as Amy realizes the true nature of her dance partner. An excellent acting lesson in body language, not to mention a show stopper of a sequence: 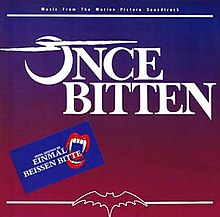 HANDS OFF: When it comes to vampire seduction dances, this one is more on the silly side, as Once Bitten has hapless hero Mark being in the middle of a high school dance battle between his sweetheart Robin and the bloodthirsty(as well as button biting) Countess.

"Hands Off" by Maria Vidal is a fun song to have playing during this routine, which offers some great goofy bits by a young Jim Carrey, and since this whole thing takes place at a Halloween costume party, so much the better for holiday themed entertaining: 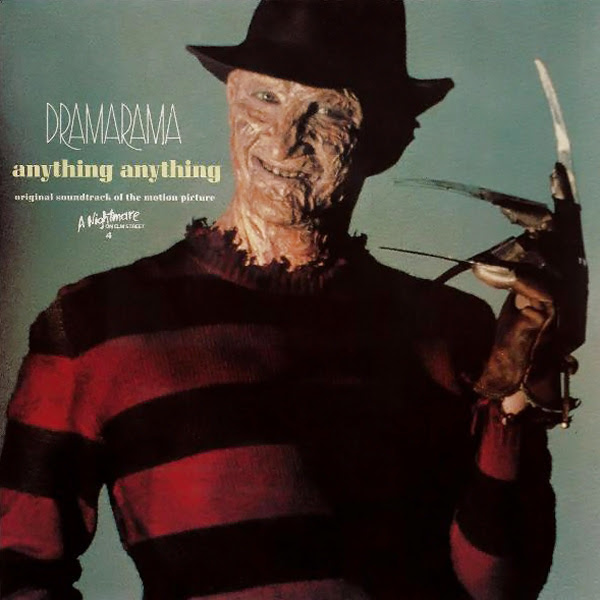 ANYTHING ANYTHING: You could easily make an argument for Freddy Kruger being a vampire of sorts, but that's a debate for another day. Yet, out of all of the movie monsters of his day, Freddy was the fearful host with the most in the music department.

By the time that Nightmare on Elm Street 4: The Dream Master rolled around, music became a big part in promoting the franchise and the studio folk strove to have songs that would play in steady rotation on MTV.

Ironically, the one memorable tune from the movie isn't on the official soundtrack. Dramarama's "Anything Anything" was featured in certain key scenes for heroine Alice(and her doomed brother Rick) that it became an integral part of the whole film. Sure, it's a simple pumped up song that fits well into any training montage but that is what made it work so well: 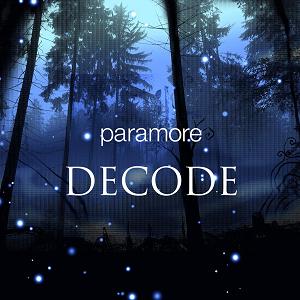 Finally, let's wrap this dance party up with a little something from Twilight. That first release off of the soundtrack,Paramore's "Decode", struck a good chord with many of fans and got that particular cinematic saga off on the right foot, if you ask me.

So, even if your Halloween plans are more home bound than out on the town, don't hold off on having some dance time that night. It never hurts to cut a rug while handing out tricks or treats , not to mention taking a break during a binge watch of Stranger Things.

A dance party can be a party of one, just as long as you don't scare the neighbors too much.  As for vampires, don't be too quick to invite them in for just one dance. Sure, they have to be gone by dawn but you will be low a quart or two before then as they see you as the party punch: