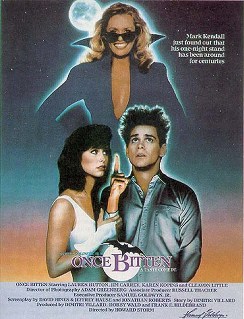 Even though it's only the beginning of October, the search for the right Halloween costume this season is well under way. Whether you're going to a big All Hallows Eve party or just dressing up to amuse your local trick or treaters, picking that special disguise is no easy feat.

I find that it helps to get inspired by music,particularly pop culture related tunes, when seeking the perfect costume and movies with a supernatural or fantasy theme(no matter how obscure) can provide a great playlist of tunes that offer plenty of off beat ideas:

RETRO VAMPIRE: Sure, the vampire genre has been done to death lately, but what about whipping an eighties or nineties version of a cheesy child of the night? One of the best examples comes from the 1985 Jim Carrey horror-comedy Once Bitten, where a high school student is given a silly seduction by ancient vampiress Lauren Hutton, whose favorite technique is biting off shirt buttons(I kid you not).

This movie not only has a dance-off at the high school Halloween party(providing a bounty of costume choices) with an appropriate song applied to the soundtrack, it has it's own specially written theme song, that makes for great background costume tryouts:

MTV PARODY: With the return of MTV Classic to the airwaves, nostalgia fans have much to rock and rejoice to. That includes actual music videos,along with many of them being parodied on old school shows such as Beavis and Butthead.

If you're looking for a fun,costume friendly video that has a parody edge to it, check out 1992's Stay Tuned, where one of the Hades created channels that hapless John Ritter falls into is "HTV". As he's being pursued by evil programmer Spike, our hero becomes the Prince inspired clad lead of a Salt N' Pepa video that mocks the genre with a playful groove:

SALOON SINGER: With the untimely passing of the great Gene Wilder, many of his films are being watched more than ever these days. Particularly his Mel Brooks classics like Young Frankenstein and Blazing Saddles, both of which have a number of grand costume designs to choose from.

One of my favorite characters from Blazing Saddles is Lilli Von Shtup, the world weary songstress who serenades the local bar patrons with her musical tribute to her romantic popularity,"I'm Tired".  Another late great entertainer, Madeline Kahn brings her humorous all to this number as well as the right amount of slightly faded glamour to her stage ensemble:

MUSICAL MENACE: No doubt, we'll seeing a few Hamilton inspired costumes this Halloween but for the sing along scary look, 1986's Little Shop of Horrors is still a solid go-to here.

While there's plenty of retro fifties outfits to draw inspiration from in this twisted modern monster movie, the true star is the monster. Audrey II may be a sweet talking leafy people eater but you can't deny the stage presence of this deviously fiendish fauna.

For those who love to make huge costumes, Audrey II is quite the prize and listening to "Mean Green Mother" while you work on that particular creation is a real bonus indeed:

Taste in costumes and movies are subjective, of course. However, when the two are blended together in just the right way, the end result can be as delightful as peanut butter and chocolate.

So, if you're stuck on what to wear for Halloween, play a few movie tunes and before Party City has their clearance sale for the season, your muse should be ready with plenty of fine dress-up ideas.

After all, whether your soundtrack comes from Rocky Horror, Twilight or a Disney Channel movie, any good costume ought to have your toes tapping as you head out the door for a treat of a time: