One thing that you can't get around when diving into Ernest Hemingway's body of work is his short stories; to avoid them would be like a Shakespearean scholar who ignores the Bard's sonnets.

Since there are several collections of his short stories, for my Year with Hemingway I went with one huge anthology which has the first forty-nine stories that he had published. After all, certain well known tales were included(which I will go over in a moment) and it's interesting to check out those that didn't get as big of a fanfare.

It took me longer than I expected or intended, as I literally finished the book over an hour ago as of this writing. Part of the reason for such a dragged out read is that my interest in short stories is more of a "take it or leave it" deal. Don't get me wrong, there are short story collections, either by a single author or several, that I've enjoyed but the format in general is not my instant go-to for fiction.

Enough complaining from me-let's go over some of the big name stories that I did like. One of the first ones out of the gate here was "The Short, Happy Life of Francis Macomber", in which the title character experiences a very brief moment of personal fulfillment that leads to his doom.

The entire story is set during a hunt in Africa, where Macomber is shown to be less than adequate when out with Wilson,the professional guide he's hired, or with his wife Margot. Wilson has no respect for his client, especially since he is also sleeping with the man's wife(who is broadly painted as the coldhearted sort for the most part).

To me, the best part of the story happens early on during the first hunt when the viewpoint of the lion that is being targeted by Macomber and company is front and center. It's a sharp bit of writing that nicely breaks into the human interactions and adds nuance to the narrative, which pays off much later: 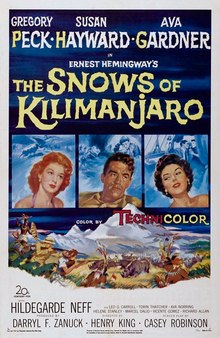 The major story that drew me to this collection was "The Snows of Kilimanjaro" and it does not disappoint. A writer named Harry is slowly dying in a safari camp, due to an injury that started off minor but was neglected to the point where serious infection set in.

Harry, when not fighting with his wife Helen, takes a mental inventory of his life that looks upon his successes and failures in equal measure.

Hemingway engages in some stream of consciousness at times here, which works out well with the otherwise straightforward tone of the story. A good chunk of the narrative, particularly Harry's personal life, feels a touch autobiographical, which adds strength to the narrative and a good solid punch to the conclusion. When TSOK was made into a movie in 1952, Hollywood went for a happier ending that displeased Hemingway greatly and I don't blame him for that. If they ever attempt a remake, sticking to the source material will have more dramatic impact:

Many of the stories in this collection are Nick Adams tales, a character that only appears in Hemingway's short stories and never one of his novels.

Nick is said to be a fictional stand-in for Hemingway himself and a good number of those stories are set in different portions of Nick's life such as "The Doctor and The Doctor's Wife" in childhood, "The Big Two Hearted River" in young adulthood and "Fathers and Sons" as Nick begins to appreciate his father once he has become one himself.

Some of the Nick Adams stories feel like early drafts of Farewell to Arms( particularly the ones where Nick is in military service and in one story, "Now I Lay Me" he is called Lt). For the most part, he seems to be right at home when dealing with nature as in "The Big Two Hearted River", which is divided into two halves and details a solo fishing trip. Nick is an okay guy but upon reading these stories, he's best taken in small doses which is just as well that he didn't inspire a full on novel directly:

As for the lesser known stories, I really enjoyed "My Old Man" where a boy named Joe has fond memories of his dad, a rather corrupt jockey, and impressed at the nerve it took to write something like "Today is Friday".

The latter is a mini-play, where three of the Roman soldiers that took part in Christ's crucifixion go out for a drink afterwards. Quite a bold subject for that time period and if someone dared to act it today, I don't think it would go over well with several parties.

Well, despite how long it took, I am glad to have experienced Hemingway's short stories. Their intensity, brief drama and sharp dialogue are important points of style that are magnified in his novels and I think that I'll be better able to appreciate the last book in my Year with Hemingway,For Whom The Bell Tolls, by having read through these.

In the meanwhile, let's wrap this up with my song choice for this book and since there are multiple people,places and things focused on in the short stories, the theme song from the 1986 movie True Stories is so on point here. When it comes to Hemingway, it's a wild,wild life indeed: