A belated birthday card to Jane Austen delivered by Darcy

Yesterday was the two hundred and forty third birthday of one of England's most beloved authors, Miss Jane Austen.  The esteemed lady who gave us six of the best novels about love,friendship and emotional perseverance has gifted us for decades with her wit and wisdom, her only thanks being the devoted love of readers such as myself.

Unfortunately as it fell this year upon one of those dowager countess dreaded "weekends", I was unable to provide a proper blog celebration for her. To make amends, I felt that only a display of Mr. Darcys would do.

Granted, I am a Captain Wentworth woman at heart(he was my first Austen hero, after all) yet there is no denying the lasting appeal of Fitzwilliam Darcy, the leading man of Pride & Prejudice. While he may be possessed of a brooding nature, it is far and away from a Bronte style of melancholy,thank goodness(no Bronte hate here, I swear!).

Rather, he is an oyster that one must be patient with in order to see him open up and reveal his true worth and yes, Darcy does learn to be less of a presumptive person as time goes on, making him more of an admirable character. With this arrangement of Darcy portrayals, I hope to showcase this proud owner of Pemberley in all of his glory in the best sense indeed: 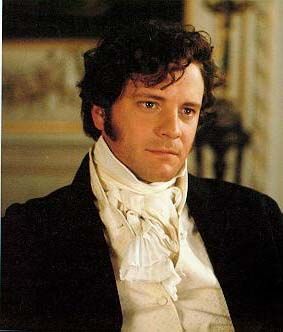 COLIN FIRTH: While many Austen fans first saw Mr. Darcy on the small screen in the BBC miniseries that cast David Rintoul in that pivotal part, a whole new wave of fandom was born when the 1995 made for British TV version gave us Firth.

To many, Firth and Darcy are one and the same. He combines the intimidating at times remoteness of the character with the steady wit and good humor that lies beneath his haughty surface.

What adds greatly to Darcy's demeanor in this adaptation is Jennifer Ehle's Elizabeth Bennet, whose lively charms are quick to draw out the hidden depths that he is bound and determined at all costs to keep in check. However, even on the dance floor, Elizabeth's good natured examination of him proves rather difficult to resist: 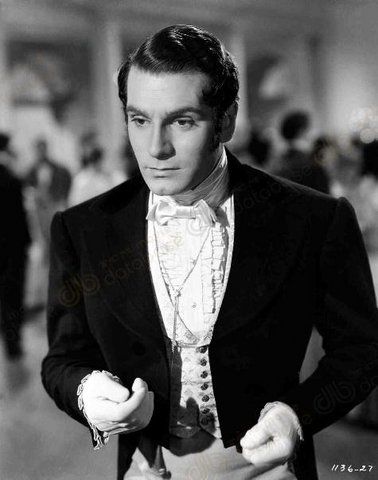 LAURENCE OLIVIER: Another iconic Darcy is the big screen version of him from 1940, where English acting legend Olivier played him along side the delightful Greer Garson as Elizabeth.

His Darcy does seem a bit more playful at times yet prompt when needed to be withdrawn. While there are plenty of flaws in this particular adaptation of P&P(the costumes alone are enough), the strength of the story comes from the chemistry between Olivier and Garson.

They take to the roles as proper yet amusing cohorts, giving the audiences their money and time's worth. Since this script is adapted from a stage play and both of the leads were established theater stars in their home country before heading off to Hollywood, this onscreen pairing seems truly meant to be:

DANIEL VINCENT GORDH: Taking a more modern approach, The Lizzie Bennet Diaries turned P&P into a must-watch webseries, wisely holding off on bringing Darcy on camera until we were well into the storytelling mix.

Gordh's portrayal of Darcy is very relatable as his stiff social attitude seems suited to the tech mogul persona given to the character. However, appearances are often deceiving in any P&P retelling proves and slowly yet surely, the warmer side of Darcy is revealed to Lizzie along with the online audience.

The whole ensemble cast of LBD is marvelous but the teaming of Ashley Clements' Lizzie with Gordh's Darcy is truly the icing on this digital cake:

The Mr. Darcy she encountered there has much in common with Colin Firth's earlier incarnation, both in looks and personality. Yet, Cowan brings his own merits to the role, giving Darcy a broad heroic charm as well as a heartfelt sensibility that makes him as swoonworthy as his predecessor.

Cowan and Rooper make for quite the pair of opposites, keeping the inherent dynamic of P&P intact while adding a few fun touches,including a tribute to a certain wet shirt scene from the Firth era:


With that, I bid our Dear Jane another happy birthday in the hereafter and hope that the knowledge that her delightful stories have kept her immortal among us enchanted readers for generations past, present and future will be comforting to her spirit.

To conclude this parade of Darcys, here is Matthew MacFadyen's misty morning march towards Keira Knightley's Elizabeth Bennet in the most recent silver screen version of P&P. While the look is more Bronte than Austen, one must admit that this is a most charmingly romantic finale that even Jane herself might not mind: