When it comes to Darcy,are you rocking the Rintoul or feeling the Firth? As part of my Pride and Prejudice Bicentenary Challenge this year,I decided to check out the pre-Colin Firth miniseries version of P&P that aired on the BBC in 1980.

David Rintoul plays our man Darcy to Elizabeth Garvie's Lizzie Bennet,following a script written by novelist Fay Weldon. In terms of the screenplay alone, Weldon keeps pretty well to the book but has a few interesting twists of her own slipped in. For some reason at one point,Mr. Collins is shown planting reeds(with poor Charlotte in tow)at a nearby pond at the behest of Lady Catherine and even wearing a strange hat,presumably to keep him safe from drowning if he happened to fall in the water.

Granted,it was meant to seen as a means of keeping both the Collines out of the way for Darcy to make his movie(more on that later)but it seemed rather unnecessary to me. A simple "We must pay a call to Rosings" would do just as well for the purpose,in my opinion. 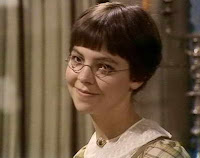 Also,Fay Weldon's favorite Bennet sister seems to be Mary, portrayed by Tessa Peake-Jones,who is the first character to be seen in the opening scene of Part One(Elizabeth appears in an upper window). Mary is given a bit more dialogue than she usually is in most adaptations and while she's still a seriously silly girl with her attempts at intellectual superiority,this Miss Bennet stands out much more than she has done before or even since this version.

Mr. Bennet(Moray Watson),on the other hand,comes across as cold and gruff with little of the good humored tone that softens many of his sarcastic comments. Perhaps,I am a bit prejudiced when it comes to Mr. Bennet,who is not the best parent in regards to offering any strong guidance to his children,yet he is a tad too harsh for my taste here: 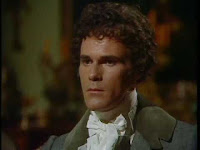 I can,however,see the charms of Rintoul as Darcy. His cultivated manner and speaking voice are suited to this Austen icon and he does ignite a few sparks with Garvie's Elizabeth. The two of them do make an engaging couple,Rintoul with his quiet smolder and Garvie's lively expressions.

Their strongest scene together is the first proposal of marriage from Mr. Darcy. While their heated exchange is not as passionately fiery as the one between Colin Firth and Jennifer Ehle in the later 1995 version,it is higher in temperature than the same scene acted out in the 1940 Hollywood adaptation between Greer Garson and Laurence Oliver:

Another key element to any Pride and Prejudice re-telling is Lady Catherine,played here by renowned actress Judy Parfitt. In some ways,she was a much younger looking version of Lady C yet she's hardily lacking in the haughty bearing department. She's incredibly chatty in the Rosings scenes,verging at times on Miss Bates from Emma territory.

When it comes to Lady Catherine's big confrontation scene,however,Parfitt pulls it off quite nicely. While I do wish they had gone outside in that "pretty wilderness" at Longbourn to square off,Garvie and Parfitt have a good little showdown in the sitting room. There is something to be said for showing such an obnoxious visitor the door at just the right moment: 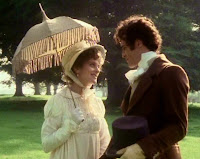 In discussing the differences between the P&P adaptations and preferences for one over the other by Austen fans,it was pointed out to me that most people tend to like the version he or she saw first,a "first imprinting",if you will. I do agree with that notion and while the 1995 BBC miniseries is my all-time favorite rendition,I can appreciate the merits of other P&P productions including this one.

Rintoul and Garvie may never replace Firth and Ehle for some but they are a respectable and very romantic Austen couple who do justice to these quintessential roles. While I remain a faithful Firth fan girl,it's not hard to see why Rintoul fans still swoon to this day:

The first version I saw was Garson/Olivier, and I was so horrified, I vowed never to watch any more film adaptations. I finally succumbed & watched the Colin Firth miniseries after reading 'Bridget Jones's Diary' - and I am so glad I did! It is my go-to indulgence after a really bad day (yes, I will watch all 5 hours at once).

Although I've tried again and again, I have not been able to get into this version and never even made it to the first proposal. Thanks for including the clips so now I don't have to try anymore!

I saw this one so much later than the others that it was almost like visiting the museum of P&P to see what versions of the latest had gone on before. I appreciated many things about it especially Garvie's version of Elizabeth, but found much of it emotionally removed for me.

I do love this version and think that Rintoul's Darcy is truer to the character as Austen described in the novel. I so agree with the "first imprint" theory. If you saw the 2005 MacFadyen Darcy and adored him, then seeing the Rintoul version will put you in a ill mood. Seeing the 1995 Firth Darcy, there is no reason to repine.

Thanks for the great analysis.

Thanks for the feedback,ladies. Colette,I do agree that the Greer Garson version takes a lot of liberties(and those costumes,whoa boy!)but it does have some charms.

Sophia,I also agree that it's good to check out the other versions of stories that you enjoy(so wish there was a P&P museum!) and glad you like my review.

Laurel Ann,happy to know that I pleased a Rintoul fan there! Thank you so much:)