Mrs. Lincoln's Dressmaker weaves a tale of a true and trying friendship

Jennifer Chiaverini is best known for her Elm Creek series of novels involving the art of quilt making but her latest work,Mrs. Lincoln's Dressmaker, cuts a swath of historical cloth from the Civil War era for her fictional frame work this time around.

The dressmaker of the title is Elizabeth Keckley,who was born into slavery but managed to buy freedom not only for herself but her son George,due to her talents as a seamstress. Elizabeth moved to Washington and started up a private dressmaking business of her own,with a respectable client list made up of both Northern and Southern society ladies.

Her impressive skill with the needle even had the wife of Confederate leader Jefferson Davis make her an offer to come back South as her personal modiste(stylist). However,Elizabeth refused on more than one ground,a main one being that she was selected by Mary Todd Lincoln to be her modiste and maker of the many gowns required for her public appearances as First Lady. Mrs. Lincoln also become a friend as well as a most valued client,a bond that Elizabeth cherished and that Mary Lincoln needed.

Mary Lincoln,in some respects,was like the little girl with a curl from the nursery rhyme-she could be a good hearted soul and a real charmer but was prone to self created turmoil and strong emotional outbursts. One of her bad habits was her tendency to spend beyond her means(and keep that information as far away from her husband as possible),a weak point that her critics eagerly loved to touch upon:

Elizabeth's role in the Lincoln household went beyond making sure Mary's dresses were ready on time. She also assisted with the children and even offered emotional comfort to Mr. Lincoln,whose health and heart were weary with war troubles.

One of the times that Elizabeth's presence was a great boon to the family was during the tragic illness and death of young Willie Lincoln. His mother's grief was all consuming,causing the other members of the family to restrain their own sorrow in order to carry on.

Elizabeth offered what comfort and support she could to both parents,understanding the loss of a beloved child all too well herself. Her son George(who was able to pass as a white man)had died in battle,fighting for the freedom that his mother had to purchase and that Lincoln was doing his best to give to the whole nation:

Elizabeth was with the Lincolns through good times and bad,the worst being after Abraham Lincoln's assassination She was a shoulder for Mary to cry on and even stayed with her in Illinois for a brief time when the remainder of the family moved out of the White House.

In some ways,Elizabeth's deep emotional ties to Mary came at great personal cost. When the former First Lady's financial problems caused her to attempt to secretly sell her ball gowns through dubious buyers(causing even more gossip and criticism), one of the ways that Elizabeth sought to help her was to write a memoir of her own life that included the White House years.

Unfortunately,that noble attempt backfired,as the book received harsh reviews and critical attacks that accused Elizabeth unjustly of trying to cash in on her connection with the family. It also caused Mrs. Lincoln to cut off all ties with her,a sad shame since Elizabeth was one of the true friends she had left.

Elizabeth carried on to rebuild her life and revive her dressmaking business,which had suffered due to her unwavering respect to the memory of Abraham Lincoln and what she felt was her duty to help his widow in any way she could. However,her real legacy was in the art of sewing,a gift that she shared with many willing students and friends over the years: 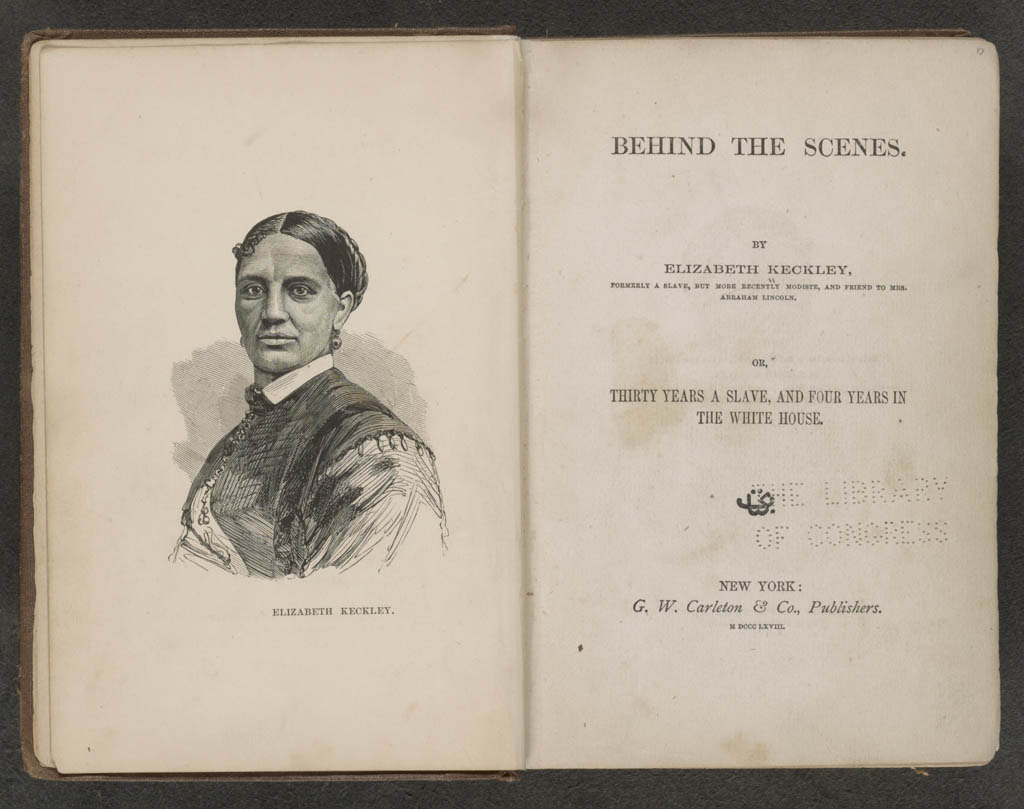 This is the first time that I've read Jennifer Chiaverini's work and I have to say that her first hand at historical fiction is skillfully applied here. She brings to vivid life Elizabeth Keckley's life and times on the page,creating an emotional portrait of a woman who dealt with her own struggles best by helping others,with her major fault being not knowing when to quit giving more than she should.

While Mary Lincoln's difficulties make her rather sympathetic at times,the toll that her  issues took on her loved ones is well showcased without painting her as a villain,something that the press during those days loved to indulge in all too much. Chiaverini's pacing is steady yet not swift,which makes this novel a good long read for those eager to take their time with a good read.

Mrs. Lincoln's Dressmaker is now available at a bookseller near you and it would make for an excellent reading group selection. While Mrs. Keckley has gotten some recent notice for her place in history from the award winning film Lincoln,Jennifer Chiaverini brings this wonderful lady further into the spotlight and displays her contributions to humanity on the high shelf she so richly deserves: