Take a mental vacation with a Spring Break Book

With winter now officially over and done with for another year,many young folk are eagerly embracing that special rite of passage that is Spring Break. Granted,times are tough and money is scarce but that never stopped anyone who truly wanted to take a little time off from their daily routine to get their party on.

However,you don't have to necessarily hit the beach or the road to enjoy this always trendy tradition and age is irrelevant when you choose to check into a mental motel with a brain candy of a read by your bedside. 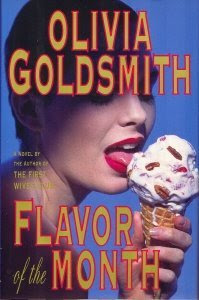 I'm doing that right now,and my choice of Spring Break Book is an old school romp through Hollywood with Olivia Goldsmith's Flavor of the Month.

The delightfully overwrought plot brings together three women from different walks of life-Mary Jane Moran,whose dramatic plastic surgery has turned her from a plus size character actress into a fresh looking ingenue,Sharleen Smith,a sweetly naive girl on the run from a deadly secret and Lila Kyle,a diva in the making, determined to outdo her formerly famous mother in any way she can.

These ladies are cast in a ground breaking TV show called Three for the Road and while their best dreams seem to be coming true all too fast,a few of their personal nightmares are close to rising to the surface.

Granted,some of the pop culture references are a little dated(the book came out in 1993)but it's still quite a page turner,as Goldsmith sprinkled plenty of salty satire into the soap opera antics of the story. In some ways,Flavor of the Month proves that the more things can change,the more they can stay the same: 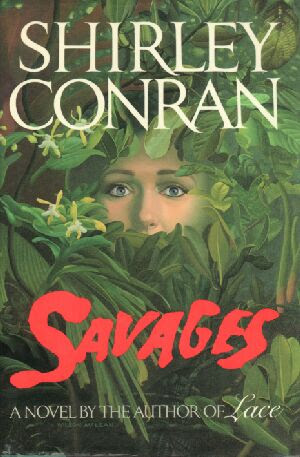 If I'm still feeling restless after that,my next candidate for Spring Break reading is Savages by Shirley Conran. It's another blast from the past(1987,to be exact),as five corporate wives find themselves stranded on a jungle island in the South Seas after their spouses are slaughtered by the locals.

Taking a few survival tips from the captain of their fishing boat,the ladies find themselves battling not only the elements and those out to finish them off but at times,each other. Think of it as a combo between any of those Real Housewives series on Bravo and The Hunger Games,with a touch of Revenge thrown into the mix:

Now,if either of these sexy sagas intrigue you,the library would be your best bet for finding a copy since they're pretty much out of print. I just happen to be lucky enough to have them still on my shelves(okay,Savages I did buy used a couple of years ago).

However,for those who want to splurge a bit and are in the mood for some Downton Abbey flair,I have a wonderful suggestion for you. No Angel is the first book in a trilogy by Penny Vincenzi and it tells the tale of a publishing empire run by Celia Lytton,the aristocratic wife of the owner who gains even more control of the business as her husband goes off to fight during WWI.

As much as Celia loves him and publishing,her heart truly belongs to Sebastian Brooke,a charismatic children's author. Torn between duty and love,she and all those connected to Celia suffer and benefit from her ultimate decision. There are loads of supporting players here, with just as compelling story lines and yes,there even is a version of the Dowager Duchess Violet on deck as well. No Angel is available in paperback,along with it's follow-ups,Something Dangerous and Into Temptation,and all three are a real royal treat:

Whatever you chose for your Spring Break Book,the key thing to keep in mind is that leisure time of the mind is just as great as actual relaxation time for the body is. As long as you don't overdo it,spring break or any other vacation is really just a state of mind so it can be taken wherever you are. Appreciate the goodness on hand and use your imagination to enhance the rest(portable saunas not included but a nice bonus if you can get them):