The wearing of the pop culture green

With St. Patrick's Day not too far away, I thought it might be fun to merge my Irish ancestry with my love of pop culture riffs. Therefore,here are a handful of green tinged legends of lore that may not be fully Erin go bragh but should be suitable for anyone wishing to tap into the spirit of the day(in non-alcoholic form,that is).

Out of the many superheroes who don emerald shades,the best known and respected would have to be Green Lantern. He doesn't always get top billing in the DC line-up and even when he does,such as the recent ill-conceived Ryan Reynolds summer box office bomb,it's not necessarily the best light to showcase him in.

However,Cartoon Network has debuted a new animated Green Lantern series that airs on Saturday mornings that may turn the tide for Hal Jordan and friends. While I'm not a major fan of computerized art,the look is solid and the storyline has a nice narrative vibe that should please some of the old school fans as well as initiate a few of the new blood to the GL corps:

In the super villain's corner,we have Marvel's The Green Goblin who is to Spiderman what the Joker is to Batman in terms of major league nemesis.

No matter how many incarnations there are of Spidey,Gobby has made his presence known whether it's TV,film or video game. Even the Spiderman musical Turn Off the Dark has the gruesome galoot front and center.

However,the upcoming reboot of the Spiderman movie series doesn't seem to have any plans to feature him,which may not go over too well with some people. Then again,GG might be in good company,since it doesn't look like Lex Luthor isn't going to be a part of the Superman reboot either:

Leaving the comic book realm for the moment,one of the most memorable plot points of the movie Crouching Tiger,Hidden Dragon was who had possession of the Green Destiny sword.

This powerful sword was under the protection of leading man Mu Bai(Chow Yun-Fat)until the mysterious warrior maiden Jen(Zhang Ziyi)won it off him in battle. While she was strong enough to wield the blade,Jen wasn't mature enough to resist showing off her skills out in public and trashing a bar in the process,which sort of fits in with St. Pat's day there.

I know,stereotyping is bad but it's hard to ignore the somewhat appropriate yet politically incorrect comparison (did I mention I was Irish?): 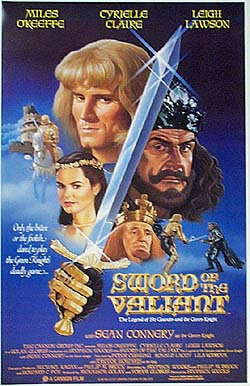 Steering into literary waters,we have the classic tale of Sir Gawain and the Green Knight,straight from the 14th century and King Arthur's Round Table. This lengthy poem tells how young Gawain took up the challenge of the mysterious forest hued warrior to chop off his head and then take a similar blow himself within a year's time.

There have been many attempts to bring this epic to life on stage and screen,with one of the better known versions being 1984's Sword of the Valiant,starring Sean Connery as the Green Knight and cinematic beefcake Miles O'Keefe as Gawain. Not the most accurate retelling but if you're in a cult movie mood,this should fit the bill:

On that note,Happy St. Patrick's Day and if you're in a party mood that evening,I hope the most unexpected guest to your celebration is The Green Man from It's Always Sunny in Philadelphia. That guy knows how to rock the beat and then some: