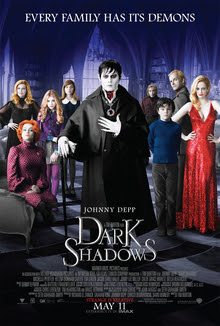 Fans of the original Dark Shadows TV series(which ran for several years in the late sixties and early 1970s)were happy upon first hearing that
Tim Burton and Johnny Depp would be headlining a major motion picture version of the goth soap opera. However,many of those smiles have become frowns after viewing the trailer for the upcoming film.

The basic premise of the story is the same;accursed vampire Barnabas Collins returns to his former homestead upon being released from his coffin and encounters his troubled descendants. The tone of the piece then seems to romp right into parody country,as a sort of Brady Bunch:The Movie vibe then starts to take over.

While the script is written by Seth Grahame-Smith(the author of Pride and Prejudice and Zombies,plus another big summer movie this season,Abraham Lincoln:Vampire Hunter),who has proven to be a rather talented humorist,I'm not sure that his take on Collinwood is going to be appreciated by the diehard Dark Shadows crowd: 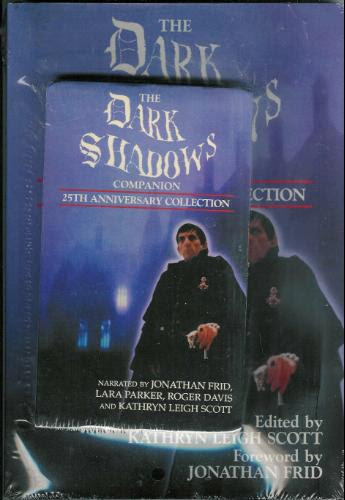 Granted,a good portion of the DS fan base loves the over the top antics of the show and have kept it alive as a camp icon for years,but others are
going to feel as they are being made the punchline of the jokes here. I only saw some of the original Dark Shadows in reruns as a kid and it was part of the reason that I became the huge vampire fan that I am. However,I also feel that my comfort level as a geek(not to mention my hopeful maturity as I grow older)helps me to be able to laugh a little about it.

That doesn't mean I'm totally on board with this version of Dark Shadows,which will be the introduction to the whole phenomenon for most of this generation.Tim Burton and Johnny Depp claim to be ardent fans of the show,for which I have no doubt about,and perhaps this is their way of reconciling that passion of the past with a reflection of their adult awareness about the flaws as well as the fun of it. One can only hope yet it is hard to deny the ripe opportunities for humor with this material:

The influence of Dark Shadows has been felt over time,with an attempt at reviving the show as a prime time contender during the 1990s and the daytime soap opera Passions clearly taking a page or two from the DS playbook. Yet,the true successor to the legend of Barnabas Collins is,in my opinion,The Vampire Diaries.

While TVD has more of a believable edge in terms of character development and sharper dialogue,it does own quite a bit to Dark Shadows there. After all,we do have a lovelorn vampire who returns to his ancestral home in order to be with the girl who eerily resembles his long ago sweetheart and there are witches and ghosts nearby. Sounds familiar in some ways,now doesn't it,folks?

Granted,things are a tad more complex with the sinister sibling rivalry,plus the previous girlfriend also being a jealous lookalike vampirella whose hobby is mind games and werewolves also part of the mix. Still,The Vampire Diaries is a very worthy heir to the bloody throne that Barnabas built:

So,while it remains to be seen if the new Dark Shadows movie is a fresh transfusion or a stake to the heart of vampire lore,I wouldn't despair just yet. Even if Dark Shadows turns out to be a dud,there is still plenty of room on the small screen for bloodthirsty melodrama to flourish.

Demand for DVD/ online streaming viewing of the original series will go up with all of the new attention given to it,thanks to the film,and season five of True Blood is arriving this June,so vampire lovers will have their fair share of dark delights to cool down with at home. It would also be nice to enjoy some blood chilling at the multiplex as well but in the end,quality should win out: