Tyrion shuffles the deck on GOT,unnecessary pouting on TAR and a new page for The Vampire Diaries

When last we checked in with Game of Thrones,Tyrion made a power move to find out who in the Small Council would be quick to sell him out to sister Cersei. He spun a tale of making a marriage alliance with his niece Myrcella to Littlefinger,Vareys and the Grand Maester,naming a different potential groom and asking all of them not to tell the Queen mother.

Naturally,someone let her in on the plan and that leak came from the Maester,which made it easier for Tyrion and friends to plug up. Nicely played,Tyrion but be careful with those other guys,neither of them can be trusted,trust me on that!:

Meanwhile,Arya's trek to the North has been interrupted by Lannister soldiers seeking out Gendry,the possibly last of the illegitimate children of King Robert,for execution.

As much as Night's Watch man Yoren tried,the troops overtook him but not without a bit of bloodshed. Arya lost her sword and her freedom yet managed to save Gendry from death by telling their captors that another boy whom they had just killed was the one they were looking for. Good going,girl and stay safe: On this leg of The Amazing Race,a Double U Turn was in place,which lets two teams get the chance to send two others back to complete the Detour challenge not taken.

Team Border Patrol(Art and J.J.)used that option to set Team Big Brother back but became unreasonably annoyed that Dave and Rachel(who they had an alliance with)didn't do so when they arrived to the DUT first. I honestly don't see what was the problem;as Dave and Rachel pointed out,Jamie and Nary(the "school teachers")were further behind the pack,plus they had a Speed Bump so in terms of strategy,delaying Team BB wasn't a necessary move to make.

You would think that Art and J.J. would be pleased to have the "honor" of u-turning Team BB but no,they were whiny and grumpy about the whole thing,swearing that their alliance was over. Being poor sports,fellas,not a smart way to earn that good karma you may need soon: 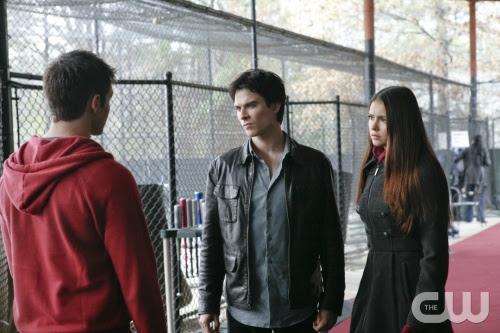 After a brief break,The Vampire Diaries return tonight with more entertaining angst and chaos. With Alric's alter ego hiding that special stake that could destroy the Originals,Elena needs to do something proactive so she chooses to retrieve Jeremy from his supposedly safe location in Denver. My best guess is that trouble is already lurking around that kid and is ready to pounce as soon as Elena shows up.

Damon is going with her,for more than one reason of course. Yep,that's the best time to consider a romantic entanglement,right when you're risking your neck to save just about everyone you know and care about,not to mention road trip! It never rains in Mystic Falls,the conflicts love to pour:

MAD MEN: I would be remiss in my pop culture duties if I didn't comment on the fist fight between Lane and Pete this week. Pete was really cruising for a bruising and he certainly got one,English style. I do hope that Lane can find a better way to relieve his obvious stress about his place in the world but delivering a much needed smackdown isn't a totally bad way to start: