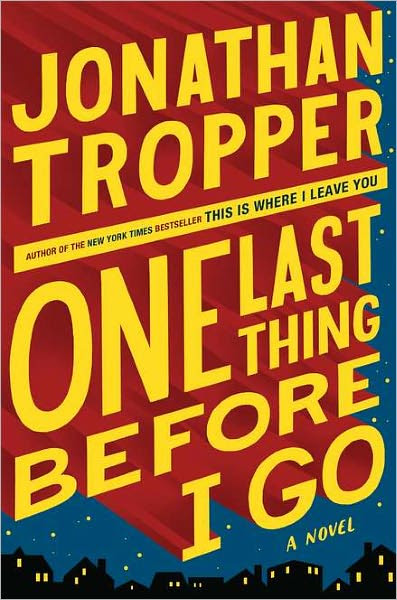 Author Jonathan Tropper's latest novel,One Last Thing Before I Go,has at it's center a rather hapless hero,Drew Silver,who never quite got over the brief bit of fame he once had as a drummer in a one hit wonder rock band called The Bent Daisies. The group scattered when their lead singer took off for a career of his own,leaving all of his former friends in dust.

Ten years later,Drew is divorced and barely living off the royalties of the hit song that he wrote in an apartment complex overrun by other lonely men in similar situations. In addition to playing a few gigs at catered events,Drew has a crush on a singer who entertains kids at a local bookstore,always looking and listening but never daring to talk to her, even about who he once was:

With his beloved ex-wife Denise about to remarry and his estranged eighteen daughter Casey showing up to announce her unexpected pregnancy,Drew's opportunities for reconnecting to his family or a more meaningful life are slim at best. However,a major medical incident in his life doesn't allow Drew to just keep going through the motions of a downward cycle.

A tear in his heart's aorta,which could be fixed by his former wife's fiance,causes Drew to rethink his entire existence and if he really wants to live at all. While mulling over his mortality and delaying the surgery that could save him,Drew makes a list of things to accomplish: be a better father,be a better man,fall in love and of course,die.

Getting the first three items done there is no easy feat,since Drew is irresistibly attracted to letting whatever happens happen and due to a mini stroke,now has the habit of reciting his inner monologues aloud without realizing it at the worst possible moments:

Despite his flaws and insistence on leisurely pursuing a death wish,Drew's family and friends do push him to make a life affirming choice,especially Casey who is also reconsidering her pregnancy options. Drew wants to mend his meandering ways but his time to do so is running out fast.

This may sound like a sad,serious story but Tropper keeps the pace light and quick with snappy dialogue and quirky humor that puts everything into proper perspective. He also manages to steer the plot lines out of what could be maudlin waters and guides both characters and situations down a sure and steady path that satisfies yet doesn't spoon feed sentiment to the reader.

What this novel is really about is a man falling back in love,not just with a new woman or his family but with life itself. The emotional notes that Tropper strings together for this mirthful melancholy melody make the prose sing right off the page:

Back in my bookseller days,I was fortunate enough to do a signing with Jonathan Tropper for his first book,Plan B. That novel was a fun read and I was able to tell him so,which he greatly appreciated.

It's been wonderful to see his work progress over the years with well received titles like The Book of Joe and his breakout novel,This Is Where I Leave You. Sometimes,the nice guys do finish first.

One Last Thing Before I Go will be on sale tomorrow and I hope that everyone who loves a funky good read will tune into it. Drew Silver may be a lonesome loser but like the rest of us,he still keeps on trying which makes him a real winner in the end: