The season finale of True Blood was beyond amazing,with plenty of plot lines being tidied up for now and a host of others set up for next time around. To start with,Tara joined Eric's crew of rescuers to free both Pam and Jessica from the clutches of the Authority.

That merry band consisted of Eric,Nora,a rescued Sookie(more on that in a moment)and Jason,who is now seeing and hearing what appear to be the ghosts of his parents encouraging him to embrace vampire vigilantism. That's going to become more of an issue with Jason next season,I'm sure,but for the time being,his gun-ho attitude was very useful in breaching the Authority stronghold.

As soon as Tara was able to release Pam from her silver lined cell,the two of them shared a somewhat unexpected show of emotion(with Jessica being able to brag how she knew it all along)and that was a lovely surprise,indeed:

Meanwhile,so many other things were going down as Alcide took over the wolf pack with the help of his disgraced father and some V plus Andy witnessed the birth of a quartet of fairy baby girls with instructions from fairy baby momma Maurella to make sure at least half of them reach adulthood(how very maternal of her!).

Also, Sam and Luna's rescue of Emma wound up taking a very startling turn that could raise the stakes for an approaching vampire/human war.

Speaking of rescuing,Eric has been a busy boy as he arrived in time to save Sookie and her fairy friendsfrom being devoured by Russell and then setting forth to not only break out Pam but convince Bill to come to his senses.

Unfortunately,Bill had already gone over the deep edge of the abyss by tricking Salome into drinking silver laced blood and preparing to ingest the true essence of Lilith himself. No matter what Eric or Sookie said,he was determined to see this ultimate death wish out to the bitter end.

I have to say that Bill's transformation was excellent and I'm not just talking about his death and resurrection as a new incarnation of the blood goddess. For such a lost soul to find purpose in such a dark place was truly stirring and right up there in my book with Buffy's season six Dark Willow arc. Bill gave one of the best villain speeches ever and my hopes for next season are definitely next level here: 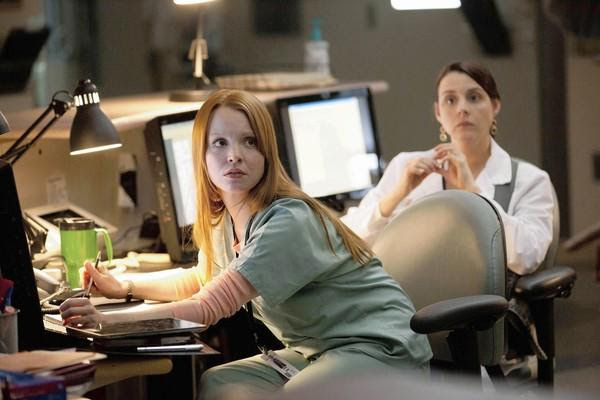 With the remainder of the week on TV being devoted to reruns and political coverage,I thought it would be best to highlight a few of the upcoming miniseries that will be making the rounds soon.

This Labor Day weekend,A&E is showing a two part remake of Coma,based on the 1977 Robin Cook medical thriller which was turned into a 1978 feature film. Lauren Ambrose stars as a med student who uncovers a gruesome conspiracy to obtain organ donations in an easier fashion than ever before.

Ellen Burstyn,James Woods and Geena Davis are also on board,so if you're looking for a scarier version of the healthcare debate,this should keep you at night:

Arriving in October on the Reelz channel is the adaptation of Ken Follett's World Without End, the follow-up to his epic historical novel Pillars of the Earth(which was also turned into a made for cable miniseries).

Much like POTE,the cast of WWOE includes rather well known actors like Cynthia Nixon,Miranda Richardson and Ben Chaplin along side newcomers such as Tom Weston-Jones and Charlotte Riley.

The story takes place during the start of the Hundred Years War and once again involves the town of Kingsbridge into political dealings far beyond it's borders. Add in some forbidden romance,a dangerous secret or two and the Black Plague and you have quite a bit of must-see melodrama on hand:

Some viewers,however,will be more than content to wait upon the third season of Downton Abbey,set to air in January of 2013. One of the newer members of the cast is Shirley MacLaine as Lady Cora's mother Martha,who will attempt to engage our dear Dowager Countess in a battle of wits yet I have no doubt of Violet getting that last good quip in:

HELL'S KITCHEN: The season finale is almost here and the one thing we know for sure is that Barbie is not going to be one of two contenders left standing. That's a shame since she did a great job for the most part and caught a lot of undue flack from her competitors. Yet,this time on the show may do more for her career than actually winning the whole shebang: