An Outlander escape gone awry, a dumb move Under The Dome and the uninspired Unauthorized Saved by the Bell movie

Claire's plans to flee Castle Leoch on Outlander this week turned out to be for nought, as the clan gathering provided both distraction from her comings and goings along with attention to her movements as well.

Fortunately,Jamie was able to help her out but had to face the music regarding swearing his allegiance to head of the family Colum. Tricky situation but he managed to make that work for him with some fancy verbal side stepping.

Claire's freedom plans still have a shot, as Dougal intends to take her on the road with him(part of his duties as second in command involves collecting taxes from neighboring areas).

Claire has earned some respect for her medical talents,especially during that boar hunt where she assisted in easing a mortally wounded man out of his misery, and that will go a long way towards achieving some of her immediate goals.

However, slipping away from the Mackenzies is going to lead to running into the occupying British army and that's a clear cut case of out of the frying pan and into the line of fire: 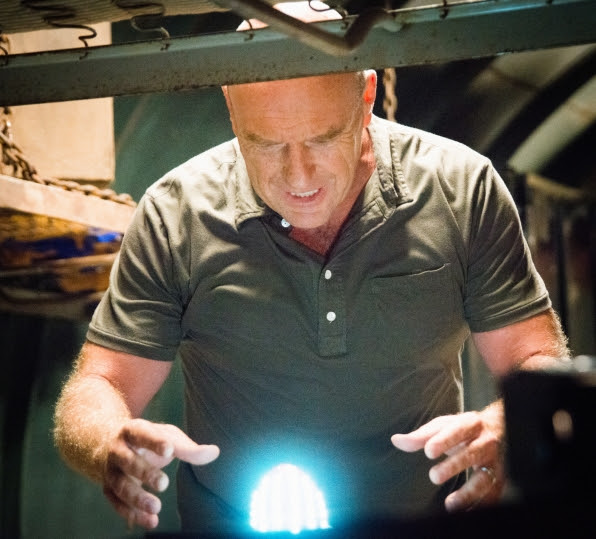 I've been pretty forgiving of certain leaps of logic that have occurred on Under The Dome but this latest move involving Big Jim and the egg has stretched my patience to the breaking point.

Basically what happened is that Barbie announced his return,along with plans to negotiate the freedom for the folks of Chester's Mill by using the egg as a bargaining chip with his dad(who is behind the mysterious outer world forces wanting to claim that sucker).

First of all, I see no reason to bargain with anyone on the outside. The portal to Zenith opens up at a public playground and if dozens of people begin to show up unannounced all at once, there is no way those secret forces can contain them all. Not to mention that they have no control over that exit(or the entrance to the Dome found at Barbie's family home), so what is the point of making any concessions there?

Anyway,back to the action; Big Jim decided that his wife returning was a sign from the Dome(after he got mad at her, of course) that his family was meant to be together. So, he took it upon himself to find the egg but wasn't able to touch it without being knocked down. Joe and Norrie came by and since they're two of the Four Hands, Big Jim forced them at gunpoint to take the egg to the underground portal.

Then, his brilliant idea was to toss the egg in, figuring it would land in Zenith for the secret forces to scoop and then let everyone leave the Dome in peace. Stupid idea, since the egg sealed up that portal instead(as Phil found out the hard way). Stupid,stupid,stupid! I swear, I was yelling at my TV when he proposed this plan and yeah, I know it was meant to extend the storyline but come on!:

While I was far too old to be the target demographic when the original Saved by the Bell series was a '90's teen sensation, I did know of the show and was willing to savor the potential cheesy goodness of Lifetime channel's The Unauthorized Saved by the Bell Story made for TV movie that aired this past Labor Day weekend.

Sadly, it was more like cold Velveeta on Wonder Bread toast as the watered down tell-all walked on tiptoes as it pulled back the curtain on the teen stars. It was still slanted to make Dustin Diamond(aka Screech) a loner hero of sorts, due to this being based on his "Behind the Bell" book that he has since discredited himself. However, he still comes across as a scuzzy jerk.

While I don't want the actors to be unfairly portrayed or falsehoods filmed about them, this movie did promise a certain level of showbiz insider fun and failed to deliver. Not there weren't some "what the hell" moments(that weird fantasy sequence with Screech entering a hot tub full of girls with a Stretch Armstrong type of body was very bizarre) but most of the big reveals were that not that shocking.

Mark-Paul dyed his hair blond and tried to have a romance with Lark but fell for Tiffany-Amber instead, while Mario Lopez loved the ladies and  Elizabeth Berkley really thought she was an impressive dancer-whoo to the hoo! Oh well, it could have been worse,trust me on that:

SLEEPY HOLLOW: The supernatural sleeper hit will return on September 22 and based on the previews, should be better than ever. So nice to have something this awesomely cool to look forward to this season: