Having a Stephen King September 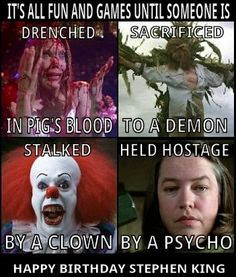 Since this month happens to have Stephen King's birthday in it, the Encore movie channel is doing a cinematic celebration in his honor.

Every night in September, they're showing a different King adaptation, ranging from the 1979 made for TV miniseries of 'Salem's Lot to King's one and so far only time in the director's chair,Maximum Overdrive.

On his actual birthday,Sept.21, there will be an all day marathon of such SK titles as Stand By Me,Cujo and Secret Window. Now, if you don't have Encore on your cable line-up, that doesn't mean you can't join in the fearsome film fest fun. Here is a short yet sinisterly sweet list of Stephen King adaptations that should put you in the right fright mood:

CHRISTINE: This 1983 take on King's evil car novel is one of the better adaptations and a fine example of director John Carpenter's scary skills. From the slick use of both soundtrack and score to the subtly smart effects that built up suspense via a flicker of headlights, Christine is a ghoulish gal that delivers the gruesome goods.

Keith Gordon plays Arnie Cunningham, a nerdy teen who buys a junky 1950's Plymouth Fury and along with the vehicle, begins to change seemingly overnight from underestimated to dangerously cool and then just plain dangerous. Reluctantly on the running boards are Arnie's best pal Dennis(John Stockwell) and new girlfriend Leigh(Alexandra Paul), who both agree that the real love of Arnie's life plans to take them to their deaths.

Christine was the first Stephen King novel I ever read; the movie was playing at the theater down my street, which had a Hallmark store right next to it that had the tie-in film cover edition of the book in it's paperback rack. I saw the movie and read the book about the same week there. While I'm not a car person, both the book and film spoke to me as a teenage outsider. As an intro to Stephen King, this is a scarily smooth ride:

CARRIE: Encore will be showing the 2002 TV remake of King's debut novel(along with The Rage: Carrie 2) but a definite must-see for any King fan is the 1976 Brian DePalma film.

Yes, it's not perfect but this movie did set the bar first and holds an undeniable place in the modern horror film canon. The key elements to the success of the original Carrie are the performances by Sissy Spacek and Piper Laurie, as mother and daughter locked together in a brutal ballad of love and hate.

Both ladies earned Oscar nominations for their work here and the film still makes many a "Best of.." list today. Christine is often seen as the male version of Carrie and I think that's more than a fair comparison yet when it comes to teen terror, she is without a doubt the belle of the ball:

MISERY: For a more grown-up taste of terror, King's nightmare version of a writer trapped in literary hell is picture perfect. Kathy Bates made movie history by winning Best Actress in 1990 for her work as Annie Wilkes, the "number-one fan" of romance author Paul Sheldon(James Caan), who unfortunately was rescued from a car wreck by this dementedly devoted ex-nurse.

This was a book that many felt was unfilmable, since it's mostly a two character story(I always thought it might make a great stage play, not a musical but a real trapdoor thriller). However, the film gives enough of an expansion to the plot without compromising the intense claustrophobic atmosphere needed for the main characters, thanks to William Goldman's screenplay and Rob Reiner's direction.

I just saw this again the other night and Bates truly soars with her character's emotional highs and lows, a deadly balancing act that could easily turn into a hammy performance. Instead, Kathy Bates showcases her talents nicely, giving us a chilling aria from a terrifyingly terrific diva:

SLEEPWALKERS: It's no shame to say that being a Stephen King fan comes with a bit of a taste for cheesy film fare and one of my personal guilty pleasures in this category is the 1992 SK script that King wrote expressly for the silver screen.

While the story does get a tad muddled at times and prone to gruesome puns on occasion, not to mention the twisted mother and son relationship of the monstrous title villains that makes Norman Bates' bond with his mother appear almost wholesome, there is something to this movie that makes it engaging to watch.

Part of the reason for that is Alice Krige, who plays Mary, the last of her vampric kind who relies on her son Charles(Brian Krause) to bring her the life force of young virgins in order to survive. She really gives this role her all and then some. Remember, if you see Alice Krige in a movie or TV episode, keep an eye on her character as more than likely, she's up to no good(and will do that well).

The movie also has several horror writer cameos(yes,King himself is included) and is credited as one of the first to use morphing effects. It's a weird one, to be sure, but rather fun in a funky way and besides, how can you not like a horror movie where a police cat is the hero?:


Happy birthday in advance, Stephen King and I hope you get all the cake you want on your special day. As for the rest of us, getting into the King groove might be seen as more suited to Halloween but such a modern master of the macabre is worth cherishing the year round:

Excellent tribute, lady t! It's amazing that most King adaptations are either terrible or fine. Misery and Shawshank, on the one end, Maximum Overdrive and Silver Bullet on the other. Very few even hit the middle ground of Sleepwalkers, or Delores Claiborne.

I'm biased on Sleepwalkers, as I had a huge crush on Madchen Amick at the time. But, yeah, it brought morphing tech to the screen, and all the stuff about charcoal grave rubbings was neat.

Christine was probably more effective at atmosphere than much else - the car is probably the most interesting character in it... But I will always stand up for Carrie, as the visuals are excellent, and Spacek and Laurie really engage the audience. The hatred and confusion and shame are so palpable! The remake was especially egregious, as it recycled so many scenes and just fell flat on its face - it epitomized lame late 90s horror movies...

Misery, of course, is the movie that will mess people up and keep them thinking long after the film has ended. All praise goes to Bates and Caan... But especially Bates, of course.

Thanks,Thaddeus-totally agree with you about the artistic merits of Carrie over Christine. While I do find Christine to be very effective, the original Carrie is much more heartfelt(and no remake has been able to touch the work of Spacek and Laurie in those key roles)

I forgot about that grave stone rubbing scene in Sleepwalkers! I plan to watch that one again(it's not on the Encore SK line-up) and keep remembering Alice Krige stabbing that cop with a corn cob instead, plus your girl Madchen dancing around the movie theater lobby:)

Delores Claiborne is part of the Encore SK salute, so Kathy Bates is being represented here at at least.