Happy September,folks, and I hope everyone enjoyed their Labor Day weekend celebrations. Since the official start of the fall season is a couple of weeks away from now, it'll be some time before the new TV season begins.

While finishing up those summer shows might be enough to fill your prime time schedule, for some of us, a little extra programming might be needed. With that in mind, I have a trio of suggested movies to pair up as either enhancements to your present viewing or to tide you over until your small screen desires are ready to be fulfilled.

All of these films are available on home video or for rental, so set up your DVD/DVR/Blu-Ray/Netflix streaming(is it just me or are there way too many options here?) for these TV dinner delights:

IF YOU'RE WATCHING OUTLANDER:

A great way to capture that old time Scottish flair found in Diana Gabaldon's  saga turned into Starz miniseries is by watching the 1995 version of Rob Roy.

Liam Neeson ,as the title character who is forced to flee from his home and family due to the schemes of noblemen and their sleazy cohorts, gives a grand performance but he is not alone in quality acting here. Jessica Lange has one of her best roles as Rob's tough as nails wife Mary, who suffers a good deal in order to protect her loved ones while Tim Roth earned an Oscar nomination for his nuanced villainy as the brutal Archie Cunningham.

This film came out around the same time as Braveheart and frankly, I've always felt Rob Roy was the superior movie. Visually beautiful, smartly written and overflowing with adventure and romance, I would be surprised to not find an Outlander fan that hasn't seen this film yet(although it is certainly worthy of a re-watch):

For a good time-travel romance, a suitable pairing can be found with Kate & Leopold, a 2001 feature that stars Hugh Jackman as Leo, a misplaced Duke  of Albany who lands in modern day Manhattan, thanks to following a would-be scientist(Liev Schieber) through a portal over the Brooklyn Bridge.

Leo keeps running into Kate(Meg Ryan), the scientist's ex-girlfriend who lives upstairs and is so busy pursuing her career goals that she's taken romance for granted. Being around Leopold slowly but surely changes her mind and heart yet he must return to his own time.

Granted, some of the jokes are a little slapstick at times and the time travel dynamics are a bit rushed towards the end(the director's cut does clear that up a little) yet there is some nice verbal banter at play here. Also, Jackman makes his role very believable and Ryan is able to do parts like this in her sleep(which means she's good at developing quick chemistry with Jackman here). Plus, how can you resist Hugh Jackman literally riding in on a white horse to save the day?:

IF YOU'RE ALREADY MISSING TRUE BLOOD:I've always referred to TB(and The Vampire Diaries as well) as my "crazy,sexy vampire show" and if you're looking for a taste of the crazy, 1992's Innocent Blood has that on tap.

Anne Parillaud plays Marie, a vampire who prefers to feed on bad guys, mainly mob types. However, her latest dinner date goes awry, leaving her "food"(Robert Loggia) to be unfinished, so to speak. She teams up with a honest cop(Anthony Lapaglia)in order to prevent that particular crime family from becoming immortal menaces to society.

John Landis directed this film, making it with as much zest for over the top humor and gore as his previous horror entry,American Werewolf in London. The special effects are pretty well done, in the best and worst sense of the term, and Parillaud has an understated sinister sweet vibe that makes her character a bit more engaging than the screenplay allows her to be. For those of you who don't mind a messy blood bath, this is your gruesome golden ticket:

If you'd rather have your vampires in a more elegant setting with some Southern charm, the Anne Rice classic Interview with the Vampire is your one stop shopping there.

I did have my doubts about Tom Cruise as Lestat in the beginning but he is very wickedly engaging here. It's a real shame that the only follow-up thus far to this gorgeously rendered 1994 production, thanks to director Neil Jordan and cast that includes Brad Pitt, Antonio Baderas and Kristen Dunst, was the Velveeta cheesy Queen of the Damned.

Apparently, there's going to be a reboot of the series as Universal studios have snapped up the rights to the entire book series and plans to relaunch The Vampire Chronicles as soon as may be. Hopefully, this will result in a good revamp but in the meantime, we do have this lush cinematic vision to enjoy: 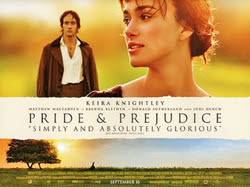 IF YOU'RE EAGERLY AWAITING DEATH COMES TO PEMBERLEY: The PBS Mystery portion of Masterpiece Theater will be airing the P.D.James' adaptation ,that has Mr. Darcy and Elizabeth Bennet Darcy dealing with a murder on their doorstep, later this fall.

Such a promised delight only excites Janeites to re-view as many P&P productions as they can.  For Austen fans, selecting just one film version of P&P is nearly an impossible task but for the sake of brevity(not to mention sticking with theatrical releases here), I think that 2005 edition of Pride & Prejudice will do nicely for our purposes.

Yes, it does tweak the original story at times but in essentials, the tale of Lizzie and Darcy is the same as it ever was. Keira Knightley is fine as the leading lady and Matthew McFadyen does make for a rather smoldering Darcy(no Colin Firth, but still...). While I am puzzled as to why the whole Lady Catherine confrontation scene was held late at night,that early morning meeting between these two stubborn lovers more than makes up for that:

For a murder mystery at an English estate story, the current high water mark is Gosford Park, Robert Altman's 2001 take on the genre. This multiple layers of character development and interaction is also seen as the inspiration for Downton Abbey(both happen to be written by Julian Fellowes).

While the time period of this film is more in line with Downton than P&P(it's set in 1932), similar attitudes regarding social hierarchy are rather present and displayed with a biting wit that Jane Austen would most certainly approve of.

The abundance of top notch British actors on board is truly an embarrassment of riches. Maggie Smith,Helen Mirren, Michael Gambon,Emily Watson, Clive Owen and Alan Bates are only a handful of the talent set forth here. Funny, some of these actors have appeared in Jane Austen films and the Harry Potter movies as well; interesting what brings such grand performers together, now isn't it?:

I hope these double features help you out on a boring Saturday night or at least inspire you to mix and match some TV related movie nights of your own. Just be sure that if you invite others to partake in your meta entertainment, not to be too rigid in your movie time rules. This is supposed to be for fun,after all, and unless you possess the charms of Lorelai Gilmore, sticking to a set of strict rules will not entice your guests to come back for another viewing party: