Hannibal Rising up just in time for Christmas! 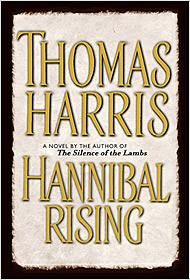 It was announced today that yet another Hannibal Lecter novel would be on the loose by December 5,entitled Hannibal Rising. The plot focues on the early childhood years of Lecter's life and also ties into the upcoming film version due out by February of 2007. The timing of this whole deal seems abit rushed but frankly,I'm thrilled. I'm one of the few people who not only enjoyed the now classic Silence of The Lambs but dug the follow-up book,Hannibal,and was slightly disappointed that the movie didn't have the guts of the book(which I knew would happen).

The big controversy with Hannibal was that(major spoilers,if you haven't seen or read it-fair warning,people!)Clarice Starling was kidnapped and then brainwashed by the good doctor to the point where she snapped and decided to be the Brain-Eating Bonnie to his Cannibal Clyde. This upset many feminists,who felt"betrayed" by the author(most of whom only knew the characters from the SOTL movie)and that he destroyed a potential role model for women. Oh,please-first of all,the characters came from Harris' book and their fate is his to decide,not some group looking to push an agenda.


Also,when I read Hannibal,that whole part of the story went up several notches on the excitement meter. I didn't expect it and there was an element of"is she really or is she just setting him up?" to it. I did enjoy the film adaptation(Julianne Moore did a fine job of replacing Jodie Foster who, it was rumored,declined to do the sequel because of the direction that her character took in the novel)but it would've been cool if they had let Clarice flip onto the dark side of the force there.


Some folks are already moaning and groaning about this new one,calling it an uncreative move on Harris' part and beating a dead horse,so to speak. The only time that I felt there was abit too much Hannibal overdrive was when they did a remake of Red Dragon,just so that they could have three movies with Anthony Hopkins as Lecter to link them all together. Michael Mann's earlier film version,Manhunter,was much better in my opinion and caught the spirit of the book much more strongly than Red Dragon did(not to mention Brian Cox as Lecter,he made that small part stand out very well).

Well,love'em or hate'em(or both),having Dr.Lecter make his bloodthristy rounds again onscreen or in the pages of another book is aces with me. Hopefully the movie will be a welcome sight during the doldrums of midwinter. With fresh audiences that have been primed and pumped with adrenaline by the Saw series and flicks like Hostel,
it may be tricky to get them wowed by the adventures of a boy cannibal. Then again, maybe not!
Posted by lady t at 10:59 AM

Hmm. Think I'll sit this one out.

I've ALMOST forgiven Julianne Moore for "Hannibal", but my grievances were script/plot-related, not due to any supposed misogynistic slant.

I still can't look Ray Liotta in the eye.

Hannibal was a disappointment to me, the only part I liked was the brains buffet actually. If memory serves, (Ray Liotta's) character, (this was the book, only saw part of movie), had me in stitches, when he kept remarking stuff like "Hmm! That smells good!".
hehe, and they were chowing down on him, actually.

I'm not sure why this was was such a downer, since I loved the first two. I think it has to do with the fact that Hannibal taking centre stage didn't do it for me, took away some of that creepy weirdness he had going for him.

I'd recommend getting hold of Robert Ressler's biography, he was the agent who pioneered profiling and Thomas Harris modeled Edward Norton's charcter on, for Red Dragon.
Very interesting book. Ressler says he doesn't much remember Harris, he was this quiet guy who tagged along and never said much

PJS,many of script probelms were due,in my opinion,to the wimped out adaptation from book to film. Ridley Scott made it look and feel amazing at times but the book was way freakier and would've been a kickass movie if done the right way.

Thanks for the book recommendation,David-yeah,the brain buffet is the best part:)

No,Jake,I didn't forget you! They should write a song called"Cannibal Christmas",it would go great with"Grandma got run over by a reindeer"!