Who will enter the Evil League of Evil?

Fans of Dr. Horrible's Sing-A-Long Blog were thrilled to hear that the Evil League of Evil decided to open it's doors to more potential villains and accept video submissions for new membership.

The deadline for applications has now passed,leaving the League and many of us concerned citizens faced with a massive number of potential menaces to society to go through and select from. To help out the E.L.E. and give the rest of the free world fair warning,I have pulled together a list of those whom I consider to be very serious candidates with an appetite for destruction and capable of delivering quite a bit of merry mayhem.

Sneak Attack is one of those subtle foes,the kind you think could never harm a fly. However,this sweet faced, purple polka dot clad miss is charmingly dedicated to a life of evil with her main targets being marsupials like the platypus who slaughtered her true love on their honeymoon.

Her agenda also includes destroying anyone's chance at romance,using her bouts of unpredictable rage and pocket protectors to do so. Sneak Attack looks a bit like another current villain,Kenley from Project Runway,the only difference being that Sneak Attack is much nicer to be around: This is one evildoer who many of us have encountered over the years in all sorts of venues;at work while we're trying to get that report to the boss on time,out at social functions and family gatherings where one can be all too easily backed into a corner,doomed to listen to an endless lecture about the proper usage of the word,"Whom" and of course,the internet.

Many have claimed to be the real Grammar Nazi but it is only now that her true face has been revealed. So far,no blood has been shed during her reign of terror,but with the backing of the E.L.E.,all of that could change:

This wily wicked woman victimizes the most innocent members of society,children,by using her mind powers to convince budget minded mothers to buy those bland,generic grocery items which dull the taste buds of people of all ages.

With her sinister mantra of "It tastes JUST THE SAME!" and her savvy new ad campaign,Store Brand is giving her arch nemesis The Coupon Crusader a real run for his money:

This fellow has the panache of a Batman villain going for him by being evil enough to create his own worthy adversary via the traditional method of making her watch the destruction of her parents at a young age.

He claims to have done this under the influence of a psychic friend but his continuing connection and relationship with this destined to save the world heroine is the hallmark of a devious foe indeed: Aristocratic villains never go out of style and Baron Mind clearly intends to move up in the ranks,with his goal to ultimately become Emperor Mind. Nice to see a young person with real ambition these days!

He may seem to have an unfair advantage or two,having met Dr. Horrible awhile back,along with his awesome powers of trivia. However,his teleporting skills are no where near the advanced skill levels achieved by Hiro Nakamura. That give us folks a fighting chance to defeat him,conqueror of Utica or not!:

I saved the most dangerous one of all for last. Behold the terror that is The Sock,who is a cunning master of disguise and born evil from day one,right down to his stitches!

He may not appear to be a major threat but don't count him out,folks. This sinister piece of footwear has plenty of evil plans up his nonexistent sleeve,like an army of detergent powered murder bots for starters. Still not convinced? He's so evil,he doesn't recycle(even Serial Mom does that!): 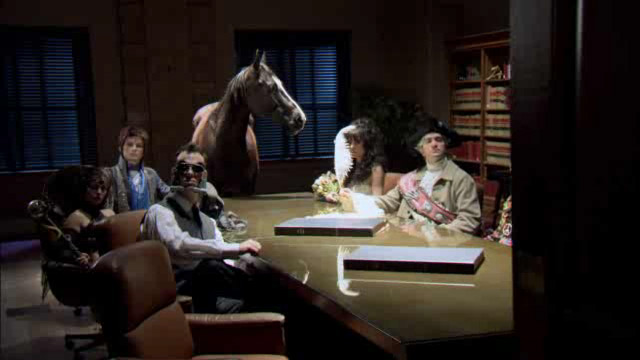 Best of luck to all of those seeking to enter the Evil League of Evil(and a heads-up to the rest of us innocent bystanders out there). It's up to the E.L.E. now and particularly,Bad Horse who rules that deadly roost with a iron hoof, to chose a new adversary of justice to their ranks.

Perhaps Dr. Horrible can offer some advice to the newcomers-after all,he's been in your position and if anyone can tell you how not to become Bad Horse's mare,it's him!:

Hi Living Read Girl,
I am the director/editor of Baron Mind, and I just wanted to thank you for the post and the kind words. The way you penned our review, even I wanted to watch my video again. Thanks for keeping pop culture on its toes. You do a great service for us all.

You've very welcome,Kyle and best of luck to you with the E.L.E.:)!

Also want to wish all of the other potential bad guys and gals on my pick list a Evilly Happy Halloween,especially the spunky Sneak Attack(who seems to be in the lead on our poll).

Hi there,
I am one of the people behind Store Brand and I just wanted to thank you for the mention in this blog! It really means a lot and it made my day. Thanks!!

You're very welcome,Laura-the video is one of my personal favorites and I was glad to highlight it here:)