Getting a wide release today in more theaters near you is The Duchess,starring Keira Knightley as Georgiana Spencer,the infamous Duchess of Devonshire. The film is based on the renowned 1999 biography by Amanda Foreman,which won the Whitbread Prize for best biography.

Much has been made of Georgiana's being an ancestor of Princess Diana of Wales(Diana would be her great,great,great niece,I believe),connecting the modern day set of scandals from Diana's time to those of her past relations.

While the two of them might have quite a bit to commiserate about in terms of dealing with some rather dicey PR,Georgiana's exploits have a longer track record of pop culture impact. 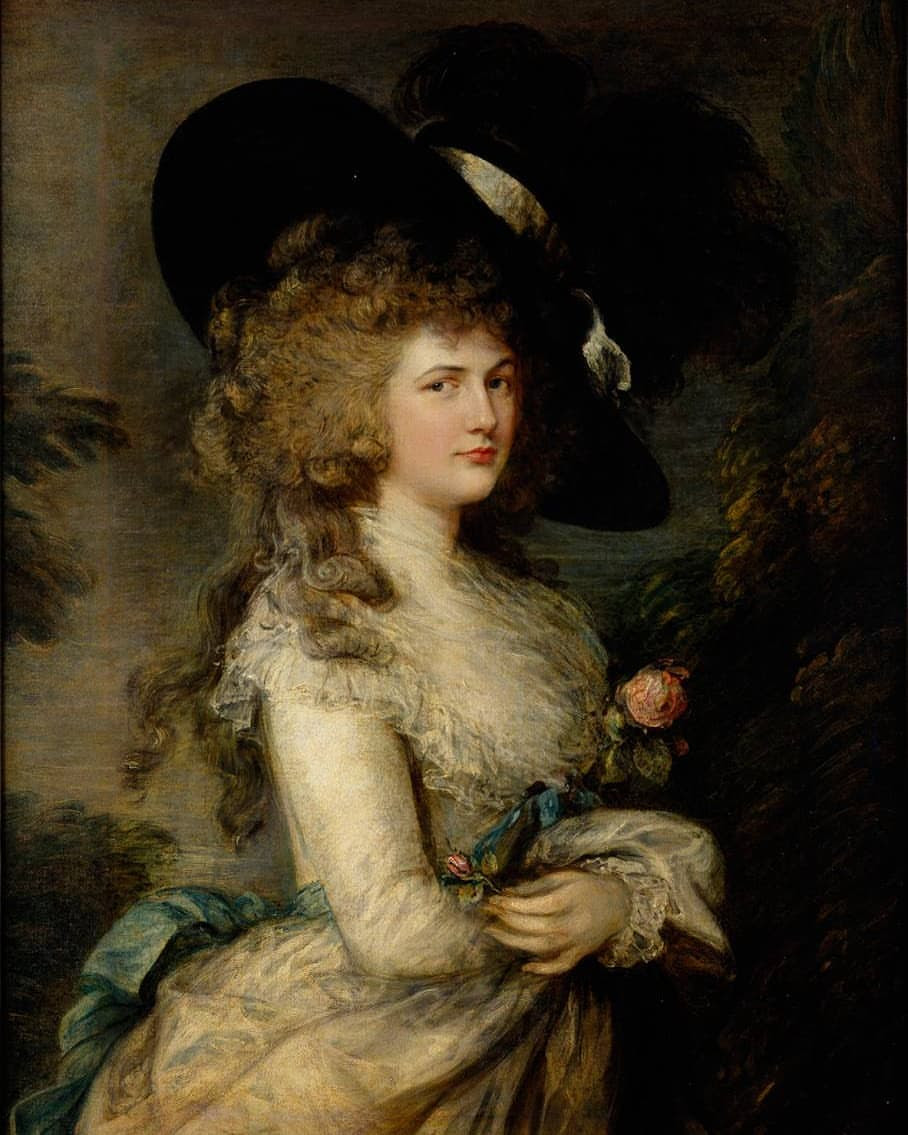 Back in 1877,the gossip and speculation about Georgiana's marriage to the Duke,William Cavendish,was ripe source material for Richard Brinsley Sheridan to use in his social satire,The School for Scandal.

Her fictional stand-in was Lady Teazle,a newly wed noblewoman raised in the country and therefore easily lead into folly by the so-called sophisticated members of fashionable society. The vast difference in style between Georgiana and her much older husband was also played up as well:

The duchess was also featured as herself in a couple of historical dramas,mainly as a bit player to the main romance tension. In 1929,Georgiana popped up in The Divine Lady,a silent film about the relationship between Lady Hamilton and Lord Admiral Nelson.

She then reappeared in the 1947 film,Mrs. Fitzherbert,which dealt with the Prince Regent's courtship and marriage to a Catholic widow that was later renounced. Interesting enough,the author of School For Scandal,Richard Brinsley Sheridan,is also a character in the movie. Since I haven't seen this film,I wonder if he and the Duchess share any onscreen moments.

Georgiana may just seem like another bored socialite who pranced her way thru history but the lady did more than set the fashions of the day(she did love to dress up there). Her salon attracted a number of literary and political figures,many of whom Georgiana ruthlessly campaigned for and against in her efforts to contribute to the Whig party.

She was not shy about her political intentions either and practiced very modern tactics to gain followers to the Whig cause,by campaigning in the streets to encourage regular folks to vote and used her celebrity status to get the newspapers interested in her goals. Yes,she had some forbidden love affairs and a pretty bad gambling habit(which was rumored to be very large upon her death)but in the end,the duchess left more than a few scandalous headlines behind her.

The film has gotten a good number of positive reviews and there's talk of a Best Actress nomination for Knightley as well. Usually,a big period piece like this screams out "Oscar bait!" but in this instance,The Duchess appears to truly be what she claims to be;a story about a woman who made the best of her situation in life and achieved a bit of fame for it along the way. Both the book and the film should ignite fresh interest in Georgiana and bring this lady back in style:

I'm ashamed that I had never even heard of her until the fuss about the movie came up. I'll have to rent this when it comes out on DVD.

No need to be ashamed there,Lady Tink-I only found out about her after the Foreman book came out and one of the advantages of the movie coming out is that more people will sit up and take notice of Georgiana.

I'll probably wait for the DVD to see this one,too,with the economy being so turbulent at the moment. Besides,there are still some summer movies I need to catch up on,praise be to the Netflix:)