There's been a lot of talk recently about culture clashes and how the different classes of our society are being pitted against each other,but to me,the biggest thing that's been overlooked in this debate is how such squabbles are really nothing new.

The best way to demonstrate that premise is by taking a look into our pop culture past and seeing just how this particular bone of contention has wormed it's way into the mainstream. A perfect place to start with is I Love Lucy,the first American TV comedy to embrace interracial marriage and ambitious climbing on the social ladder without any soapbox grandstanding.

While many of the attitudes about what a woman's role should be are very out of date and plenty of stereotypes abound,you can't deny that Lucy and company did hit the nail on the humorous head much more than some of the sitcoms and skit shows strive to do these days. With comedy,it's best not to over think it,just go for the funny. Let's take a gander at some of the best ILL social farce bits: 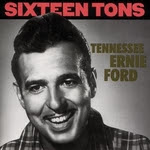 Tennessee Ernie Ford(the country star best known for "Sixteen Tons")was a re-occurring guest star on the show,playing Lucy's "Cousin Ernie." Lucy and Ricky liked having him visit but Ernie always managed to wear out his welcome,yet was too lovable to just toss out. Lucy pulled a good number of stunts to get him to leave on his own,such as dressing up as a sexy big city vamp(the kind that his mother had warned him about). As is the norm with many of her schemes,the situation backfired:

DOUBLE DATING WITH A COUPLE OF COUNTRY GALS

On one episode,Fred and Ethel were fighting over what to do on their anniversary(she wanted to go out to dinner and he wanted to see the fights). Ricky and Fred teamed up to make the girls jealous by lining up a double date for each other. Lucy and Ethel countered that by making sure they were the dates in question,a mother and daughter double team of trouble:

Lucy and Ethel planned on making a fortune by marketing a salad dressing but their first TV ad was so successful that the dollars and cents they were putting into it didn't add up to any profits. To try and fix that,they went back on the air to unsell it. The gimmick they used for the original commercial was the "average housewife picked at random" to taste test it and for the negative version,Lucy played another red state kind of gal:

Lucy and Ethel felt at one point that they weren't stylish enough to keep their men interested in them,so they went to a charm school to learn how to be high society glamor gals. When the fellas got a look at the results of their wives' education,their reactions were ones of shock and awe,to say the least:

When Ricky's ploy to get a raise from his boss leads him to the unemployment line instead,Lucy and the Mertzs decide to ruin the opening night for his replacement at the Tropicana by filling up the reservations list with fake names and staging a number of walkouts by the kind of ritzy clients nightclubs love to canter to:

So,you see,this class culture war thing has always been a part of our world,real and imagined. The only difference between then and now is how we deal with it.

Perhaps,we could take a clue from those amusing social satirical skits and band together to get through these tough times that are affecting all of us in every tax bracket. We may not always be in tune with each other,but united,we can make some pretty swell music for all to enjoy: