A double dose of Dickens,courtesy of Oprah

After making peace with Jonathan Franzen and praising his novel Freedom to the skies,Oprah announced her 65th Book Club selection which is two titles from the vast canon of Charles Dickens. A Tale of Two Cities and Great Expectations are her duel picks,to be read and discussed by the end of January 2011.

This is not the first time that Oprah has gone old school with her book club picks(her oldest classic choice before Dickens was Tolstoy's Anna Karenina,published in 1877)or the first that she has had multiple novels by one author offered up before(Faulkner's As I Lay Dying,The Sound and The Fury and Light In August were her Summer of Reading selections back in 2005). No doubt that some like myself might have wished for Oprah to go for Jane Austen but Charles Dickens is quite the next best choice in British literary authors to take on: 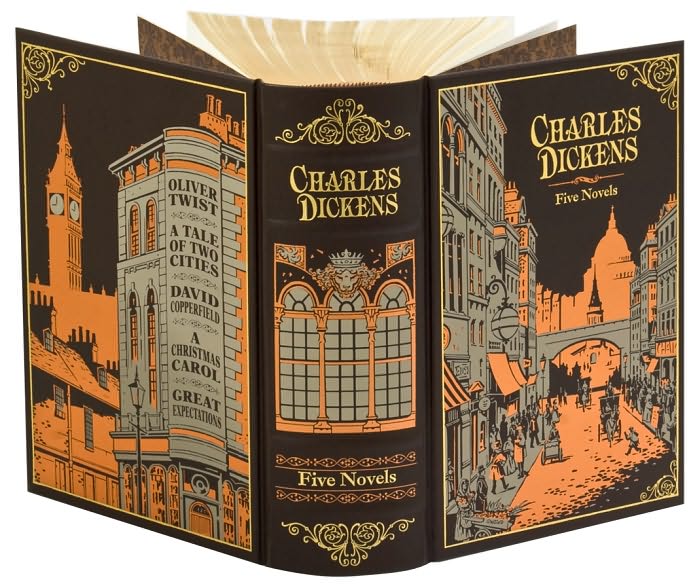 During her announcement,Oprah mentioned that unlike her previous picks,she has never read Dickens before. That makes me wonder a little about her decision to start with these two particular novels. Granted,selecting the first one of Dickens' vast array of novels to introduce yourself to is rather a daunting task.

Not only is the sheer number and length of his works a bit intimidating but a good many of them are all too familiar to even the least of the pop culture savvy among us,thanks to numerous film and TV adaptations. A Christmas Carol alone has had dozens of versions made over the decades,including stage,screen and reworked sitcom plots.

I suppose that many scholars would recommend David Copperfield as a solid first Dickens but even that book has quite the formidable reputation,plus the status of being the most widely intimated masterwork,that can easily put a casually curious bibliophile off from tackling as a relaxing holiday read:

A Tale of Two Cities and Great Expectations were written in the latter half of Dickens' career(TOTC came out in 1859,followed by GE two years afterward)and may seem to be complete opposites when it comes to characters and plot.

One deals with the effects of the French Revolution upon both English and French folk caught up in the struggle and the other has a young man being put upon by dubious people and willing to be manipulated if it will get him the elusive girl of his dreams.

However,there is one theme that links both of these unlikely novels together and that is class. Pip,the leading man of GE,may be sympathetic at times yet his main flaw is snobbery,which has him fruitlessly pursuing the raised to be cold hearted Estella while overlooking the virtues of poor but kindly Biddy,for example.

Pip is also less than thrilled to find out the identity of the mysterious benefactor who gives him the means to be a "gentleman" is not the lofty person he assumed it to be. Pip's notions of "proper society" reflected his time period and in some ways,fits all too well into a few of our modern day presumptions:

A Tale of Two Cities gives the phrase "class warfare" a truly literal meaning,as some of the motivation for the violence of the French Revolution comes to life through many of the characters. The harsh disdain for the plight of the peasants by members of the nobility leads to a blind fury that sweeps up both the innocent and the guilty in it's wake.

One of the worst is the Marquis St. Evremonde,the vicious uncle of Charles Darnay who changes his name out of disgust for the legacy of vile behavior his family has among the locals. Unfortunately for his nephew,the renouncement of his uncle's base cruelty is not enough to prevent Darnay from being persecuted for the crimes of his kinsman.

Quite a bit of food for thought,especially in these turbulent times we find ourselves in-will Oprah address any of this in her book club discussion? We shall have to wait and see,folks(the following clip is quite spoilerish-you have been warned):

Regardless of how the reception of these two books will go over with Oprah's regular Book Club members and biblio bystanders,you do have to give the lady kudos for jumping into such time honored literary waters without fear.

Whether you're rereading either one or just discovering the both of them,Charles Dickens is a man for all seasons and there are plenty of reasons to delight in his engaging prose. Sharing that joy with others is just the icing on the classic lit cake: