Top Chef All-Stars sleepover blues,Vampire Diaries get too close for comfort and will TAR finally have an all-girl team win?

For round two of Top Chef All Stars,the Quickfire challenge had a celebrity judge on hand to choose the winner. Joe Jonas(yes,of those Jonas Brothers)was the surprise guest for the annual children's sleepover at the Museum of Natural History and he asked the chefs to make a midnight snack for the kids.

The snack had to be eaten out of a paper bag,which was an important factor for the culinary contenders to take in there. It came down to Tiffani and her Rice Krispy treat snowballs with graham crackers and malted milk vs Spike's homemade potato and carrot chips with mascarpone marshmallow dip.

At that point,Tiffani and Spike headed up two teams to make enough of their treats to serve to the kids at the museum in order to determine the winner. Overall,the youngsters appreciated the late night sugar rush and Tiffani won immunity for the Elimination challenge.

The chefs wound up staying overnight,so that they could make breakfast for the children and their parents in the morning. The theme of each team's morning meal had to be based on the diet of either a Tyrannosaurus Rex(meat,dairy and eggs) or a Brontosaurus(veggies,fruit and grains. Tiffani went with T-Rex,thinking that it was the better option.

For some strange reason,Tiffani and most of her team thought they would have access to the fruits and veggies as well and were befuddled by their limited options. The Bronto breakfast turned out to be the tastiest choice for everyone,even offering up unusual dishes like a potato gnocchi made by Fabio and Stephen. Fabio fretted a little about the way the potatoes were handled in the kitchen but it didn't affect the end results.

The winning dish from Team Bronto was the banana parfait with mixed fruits and tandoori maple. Marcel,Angelo and Richard worked on that one and Marcel got fussy when Angelo decided at the last minute to have the plums sliced in half. Silly Marcel,whole plums are not appealing to kids!

Anthony Bourdain sat this round out,having the fourth seat at the Judges' Table filled by Katie Lee(former last name Joel)who was the original hostess for the first season of Top Chef. It's a good thing that he wasn't there since the anger expressed by the members of Team T-Rex would've lead to him having a fight with someone in the parking lot,no doubt in my mind about it.

Tiffani complained about not understanding the menu restrictions,others sniped at Jamie for leaving the kitchen to get stitches in her thumb(as a nurse's daughter,I don't buy into that whole "tough out the pain" attitude when it comes to major cuts like that)and the only dish that anyone liked was the steak and eggs plate with Hollandaise sauce that Tiff and Dale L. managed to pull together.

The person with the worst dish and the worst attitude was Jen,determined to defend her braised bacon and hard boiled eggs to the truly bitter end. First off,that plate looked unappetizing(many complained that the bacon tasted wet) and second,the main problem with the dish beside Jamie not being able to help with it was Jen's mindset of "I only cook for the judges,not the people",which she expressed in the Stew Room.

I don't recall Jen having such a highhat attitude during her original run on TC but her bitch switch was definitely flipped on this time. Judge Tom claimed that he didn't mind the angry feedback but Jen was asked to pack her knives and go,no mere coincidence in my opinion.

Well,this All Star season is certainly not boring,that's for sure! Next week, some lack of rushing around during a prep relay race causes extra tension for one team. Should be a nice bout of fast foodie fun!

The Final Three teams for The Amazing Race have now been determined at the end of the latest leg. As expected,Nick and Vicki fell far behind,due to the six hour penalty they earned that gave them a late start. At least Nick claimed to have learned his lesson about treating others,especially his girlfriend, with respect(let's hope he meant it,folks).

So,that leaves us with Jill and Thomas,Claire and Brooke and Nat and Kat. I'm personally rooting for Nat and Kat to be the first female team to win TAR. The two of them have run a very sportsman like race and given each other a lot of friendly support. Brooke and Claire are nice enough,but a tad too dippy at times.

Jill and Thomas did benefit by winning that Pass early on yet they are not that interesting a couple to follow. Best of luck to all of them and fingers are crossed for Nat and Kat to make TAR history: 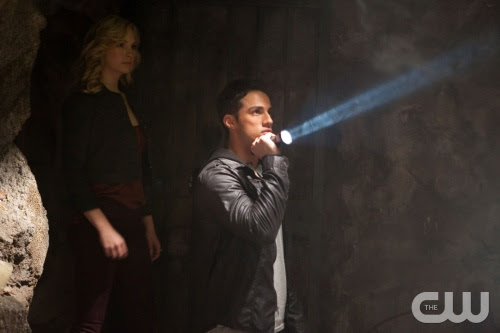 Opposites certainly attract on The Vampire Diaries,as Caroline helps Tyler get ready for his first big werewolf transformation. I like how even a jerk like Tyler is getting a much more rounder characterization as the plot lines move on and linking him up with Caroline,another struggling to deal with a new found supernatural status person,is a good move.

Adding some possible romantic tension to the mix is par for the course on this show but it would be fun to see where this pair of star crossed lovers could end up by the time the finale rolls around: 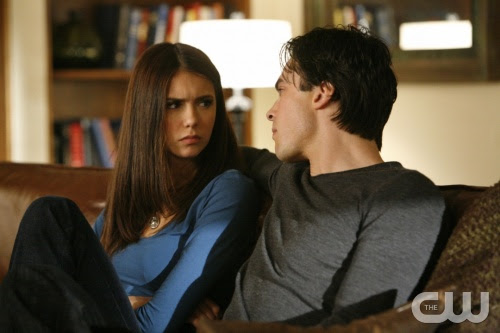 Meanwhile,romantic tension abounds as Stefan is trapped with Katherine in the tomb,leaving Elena vulnerable to more that just the likes of Klaus and his crew. Not sure when this series is ready to take it's midwinter break but each episode is heating up these cold nights rather sweetly:

THE WORST COOKS IN AMERICA: A second season of this cooking for the clueless competition is due to arrive this January,with returning chef Anne Burrell facing off against Dinner Impossible's Robert Irvine to train a failing foodie. Hopefully,Food Network won't have any transmission barriers this time so that we can get right into the mix of things from the start: