A gaggle of Golden Globe Best Songs to groove to

The nominees for the 68th Golden Globe Awards were announced this morning,with the ceremony being set to air on January 16,2011.

While congratulations are in order for the TV related categories(The Walking Dead scored a Best Drama spot along with Mad Men and the Starz miniseries The Pillars of the Earth earned a couple of noms,including one for lead actress Hayley Atwell),it is the film section of the show that I'm most interested in.

While there were a number of surprises,both welcome(Jennifer Lawrence in Winter's Bone)and a tad unexpected(Johnny Depp for Best Comedy or Musical for The Tourist? I heard the movie wasn't too good but I don't think it was intended to be funny),a few of them have a good chance of reflecting who will be up for what on Oscar night.

With that in mind,let's look at the Best Original Song nominations and see if we have anything worth listening to. It's been rough times for this category the last few years but like any good song,the beat goes on:

BATTLE OF THE BURLESQUE BABES 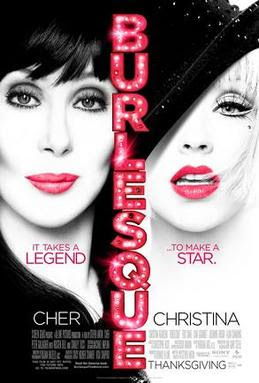 Not too startling,the musical melodrama Burlesque won two of it's three noms in this category,with one song from Christina Aguilera and the other being a Cher number. Since both ladies are excellent singers with strong fan followings,this could be quite a pop culture conundrum here.

On the one hand,Christina is a natural born diva with a top notch voice and powerful vocal range,who has done her best work when taking her own path on the catwalk rather than jumping on the latest bandwagon.

As for her acting talents,I can't really say since I didn't see the movie(which has gotten mixed reviews and box office results)but the tune she's up for you,"Bound to You" showcases her skills as a woman coming into her own persona beautifully:

Just as powerful is the swan song for Cher's older,wiser character titled "You Haven't Seen the Last of Me". Cher has more than paid her dues on the movie and the musical front,not to mention still has the chops to wow a crowd with her dulcet diva tones. You don't really want to root against either one of them,so it's possible that Christina and Cher may cancel each other out here:

Two of the other songs up for the award are from kid flicks,with well known singers doing the honors. Mandy Moore,who has done live action work on film,is the voice of Rapunzel in Tangled and naturally lends her singing talents to the soundtrack.

Her nominated tune is a love duet(with vocal co-star Zachary Levi)called "I See the Light" and it's your typical "I found my true love" number than most Disney Princess films are known for. This is a nice little love song but not quite as memorable as say "Kiss the Girl",in my opinion:

The other family friendly nominee is from the latest Chronicles of Narnia film,The Voyage of the Dawn Treader. The earlier Narnia movies didn't have big songs attached to them that I recall but with hopes of jump starting this franchise that has lost some of it's steam recently,it seems like the producers decided to go big for the theme song on this one.

Carrie Underwood recorded "There's a Place for Us" and her version can be found on the official soundtrack. However,there are a bevy of international artists covering this song including E.M.D.,Sonohra and Victoria S.

While Carrie will no doubt be tapped to perform this on the Academy Awards if the song gets the Oscar nod,it would be fun to see Victoria S on stage instead. Especially if they let her wear the metallic queen ensemble that she sports in the official video-very Gaga inspired,to say the least: 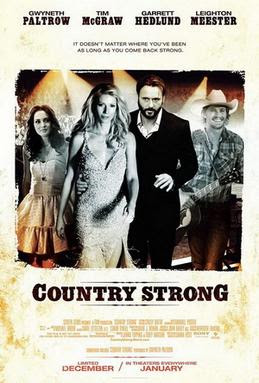 The final song on the docket is from the upcoming film Country Strong,starring Gwyneth Paltrow as a fading country music star who is making a desperate comeback tour with newbie singing sensation Leighton Meester. Paltrow caught the music bug years ago when making the film Duets and her marriage to Chris Martin of Coldplay pretty much sealed the deal for that interest there.

Unfortunately,the tune that was chosen for the Globes is "Coming Home",for which there is no video available at this time. The title song of the film is the one that the studio has been heavily promoting and since some of that can be heard in the trailer,it seemed like a good idea to place it here.

The movie itself sounds like a mix of All About Eve and The Rose,which may be a good thing as well as a bad. We'll just have to wait until January to find out for ourselves:

All in all,not a shabby set list for Best Song this year. Perhaps a few of them will make it to the big Oscar show and give us a toe tapping good time that night.

It's a shame that Hugh Jackman is not on board for hosting duties for either the Globes or the Oscars but then again,those Wolverine movies don't make themselves. Hopefully,he'll be able to share his musical prowess along with his physical,with audiences once more: