Mad Men gives us a song and dance,TAR teams fight for the Fast Foward and new stakes for The Vampire Diaries The fifth season of Mad Men started off with a blast,as civil rights protests and their impact become part of the scene at Sterling Cooper Draper Price and other social changes are in the wind.

The other main event of this two-parter was Don's surprise birthday party,orchestrated by new wife Megan right down to putting on a special performance of "Zou Bisou Bisou" as her gift to him. It was a charming number and everyone was entertained(and a few were slightly jealous). However,the aftereffect of that musical interlude caused a few unwelcome ripples at the office: Speaking of the office,Joan stopped by for a visit with her new baby and a chat with Lane about her coming back to work. Turns out that she didn't need to worry about taking back her place of honor,since their finances are close to dire straits and could use some of her grounded guidance.

Along with Pete's power struggles with Roger(who is becoming increasingly worthless to the business,in my opinion)and other tensions simmering under the surface,this new season of Mad Men is showing signs of renewed vitality and is as watchable as ever:

Another Fast Forward came up on The Amazing Race this week and two teams decided to go for it.The challenge was to stack 150 bales of hay from a truck into a precisely measured pile on the ground.

Team Jersey(Joey "Fitness" and Danny)went up against Team Pilot(Rachel and Dave,a combat pilot and his army wife)and at first,Team Jersey seemed to have the edge. Team Pilot was a bit overwhelmed at the beginning and they nearly started to argue too much again(like they did in a previous leg).

Yet,as time went on,it was clear that Team Pilot was much more organized and in the end,they completed the task. They came in first and won a pair of cars as their special prize(nice!). Unfortunately for Team Jersey,the time that they lost in going for the FF lead to them being eliminated from the Race. Sorry,guys,but at least you gave it your best shot: 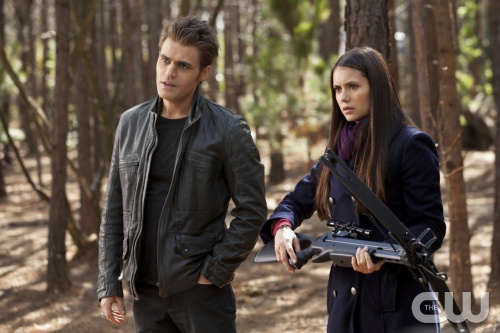 On The Vampire Diaries,the gang is now able to focus more on the clear and present danger that is Klaus and his Original siblings due to Ric's Jekyll and Hyde dilemma being wrapped up for the moment.

Damon's discovery of the white oak that can kill them being part of the framework of the restored Wickery Bridge appeared to be a lost hope as his former mentor Sage burned it up to protect her old flame Finn.

As is the way of these things,however,the Salvatore boys did manage to recover a nice chunk of that special wood to whittle into stakes for all of their friends to deploy as they will. Klaus and kin's goose looks cooked but don't be too sure about their demise,folks. They do have to string out some more plot line rope to last until May,after all(not that I'm complaining!):

CHOPPED ALL-STARS: A second round of this special competition for charity begins next week and the list of contenders includes Cat Cora,former Food Network Challenge host and current judge Keegan Gerhard,Marcus Samuelsson and Iron Chef Michael Symon. This sounds like a savory showdown where you won't want to miss one moment or a bite: