2008 officially comes to an end tonight,and many of us will be glad to see it go. While the need and desire to shuck this year off and bounce right into '09 with arms and hopes wide open is completely understandable,we should stop for a minute and give thanks for some of the good that '08 has bestowed unto us.

Yes,there were a number of great and wonderful things that did brighten up the dark spots of this year and to ignore that would only encourage bad karma to come a-knockin'. So let us reveal and rejoice in the pop culture glories of 2008:

THANK YOU MARVEL & DC,for bringing to the screen great versions of Iron Man and The Dark Knight. While Iron Man's box office reign may have peaked a little sooner than expected and backstage feuding has caused a casting change for the sequel,it was an excellent debut for Tony Stark and an amazingly well earned comeback for Robert Downey,Jr.

The loss of Heath Ledger is made even more poignant due to his groundbreaking performance as the Joker in TDK,but the film was not strictly a one man show. Christian Bale,Gary Oldman,Maggie Gyllenhaal(a great example of recasting that works),Morgan Freeman, Michael Caine and in particular,Aaron Eckhart gave this film their all.

The success of both movies(along with some other good comic book based films,such as the reboot of The Hulk and Hellboy 2:The Golden Army)only makes the possibility of other decent superhero stories being properly adapted and enjoyed by everyone:

THANK YOU,HBO,for giving us True Blood,which more than makes up for the loss of such vampire centered shows like Moonlight and Blood Ties.

The series not only turned the Charlaine Harris Southern Vampire series of books into must reads(and pleased those who already know them well),it expanded and developed several of the supporting players into folks who could stand apart from the central vampire love story plot.

Season 2 of True Blood starts in the summer of 2009 and vampire fans can hardly wait to see Sookie,Bill and the rest of the gang heat up their bloodlust: THANK YOU,STEPHENIE MEYER,for Breaking Dawn(which many folks need to seriously reread and reevaluate)and for giving your input on the first film adaptation for the Twilight series. In my humble opinion,that helped to make all the difference in bringing the book to life on screen successfully.

Even tho the original director,Catherine Hardwicke,won't be involved in the film version of New Moon,her replacement is a very competent fellow(Chris Weitz)and as long as Meyer is still consulted on the important elements of the story,everything should go harmoniously well: 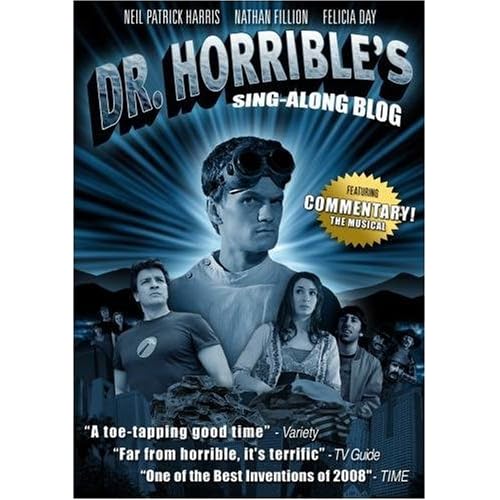 THANK YOU,JOSS WHEDON AND FRIENDS,for Dr. Horrible's Sing-Along Blog,that weirdly sweet tale of a would be villain,the love of his life and the obnoxious superhero who stood between them.

It was a great way to showcase the comedic and vocal talents of Neil Patrick Harris,Nathan Fillion and Felicia Day,not to mention proving that the internet can be used for more than sleaze and cheesy exploitation.

Folks can still watch Dr. Horrible online and the CD and DVD are available for purchase(I'm awaiting my DVD copy as we speak). With any luck,we may get a sequel or at least a counterattack from the Evil League of Evil:

LOVE AND OBSESSION ON THE RISE

EVERYONE'S A HERO,OR A HERO SANDWICH IN THIS CASE

SLIPPING IN FRONT OF THE SHEEPLE

THANK YOU TO EVERYONE WHO USED THE INTERNET FOR THE CREATIVE GOOD:While there's still plenty of online abuse and misuse,it gives one hope for the future to see folks making fun little videos to either entertain,promote or send out a satirically positive message into the online universe. Here are just a handful of my favorites(apologies to those left out,but this post has to end at some point!):


BEWARE THE TERROR THAT IS STORE BRAND!:

THE FIRST RAP SONG ABOUT PARTYING WITH DINOSAURS:

AND FINALLY,THANK YOU TO THE REST OF YOU who take the time out to read this blog. I hope that you've been amused by my ramblings and that you will continue to check on this little corner of my world next year and I will try harder to do the same for you and your excellent blogs/websites as well. Thank you especially to Lady Tink,Robin Brande and Planet Books(all of whom are included in my links section and are wonderful places to explore)for your continued patronage and positivity.

Happy New Year,folks and I'll see you all next week and next year. Thanks again for the love:

Here's to hoping that 2009 has just as many bright spots! Love SomeRandomGuy lol. True Blood is awesome but I still miss Moonlight and Blood Ties :(

Thank you for hosting such an interesting blog!