Milk:it does a movie good

I was able to finish up the year 2008 in film by watching Milk,the biopic about the 1970's gay activist and first openly gay person to hold public office Harvey Milk,played by Sean Penn. Penn's been on a strong artistic streak in film over the past several years and while I haven't seen most of those performances,his work in this movie is clearly Oscar worthy material.

I was more concerned with how well the director,Gus Van Sant,would showcase the story on film;Van Sant used to be a favorite director of mine,but for some time now,he's pretty much been coasting on his former film triumphs and putting out sad excuses for cinema(that godawful remake of Psycho,for a major example). Fortunately,for the legend of Harvey Milk and the audience,Gus appears to have remembered how to make a movie again.

The story starts off with Harvey at age 40,who is regretting that he hasn't done much with his life up til then and goes off to San Francisco with Scott Smith(James Franco,who is excellent here)to start over.

The two of them literally set up shop in a camera store on Castro Street,which soon becomes an impromptu headquarters for Harvey's growing interest in gaining political influence for the constantly persecuted gay community in the area

Screenwriter Dustin Lance Black did his research for the film by seeking out many of Harvey's friends and acquaintances during that time period,which was a brilliant way to approach the material. You get a true sense of why people were willing to listen and follow Harvey where ever he was willing to take the fight for gay rights to:

Harvey is neither portrayed as a saint or made out to be a self involved opportunist;instead,he is shown to be pragmatic about attempting to form certain alliances that he felt would be ultimately beneficial to his cause,such as Dan White(well played by Josh Brolin)who wound up murdering him and the mayor:

His choices of the heart,however,lead him to some very personal moments of tragedy and regret,as an eventual breakup with Scott and then taking up with emotionally unstable Jack(Diego Luna)who neediness can not be truly fulfilled by anyone,especially Harvey as he gets more deeply involved with his crusade:

The battle against Prop.6(which would have denied legal protection for openly gay people in the workplace,especially teachers,and housing),which was part of a nation wide campaign against gay rights being spearheaded by Anita Bryant and Sen. John Briggs,was a key element in Milk's political career that ultimately lead to his murder.

It's also a battle that many folks will no doubt use as a compare and contrast to the current conflict with Prop.8 and some of those people fighting for that cause could take a few tips from Milk's tactics.

Harvey was outspoken and unwavering in his commitment to push the cause forward,even in the face of possible defeat. He intelligently debated his opponents in public and shrewdly used any and all publicity he could get in the best interest of helping others in communities all over the country who were about to be affected by these terrible laws. His friends and allies were just as motivated,many of whom are still actively involved in political causes today. 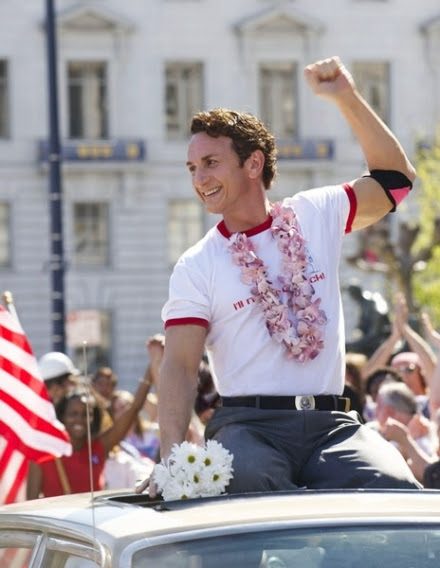 Getting back to the film,I think that this movie does justice to what Harvey Milk's legacy was and still is to many people who are out there trying to make things better for the next generation to come along.

Sean Penn will definitely get an Oscar nomination for this film but whether or not he 'll win is another story. He's up for several awards as it is,at the moment,and should receive plenty of props for his performance and rightly so.

I also feel that Josh Brolin did a great job as well,subtly showing the confusion and in over his headiness of White in his new political office(that whole Twinkie defense is mentioned in the afterwords portion of the film and not gone into in length,which is how it should be). Emile Hirsch also gives a standout performance as Cleve Jones,a cynical young man who becomes one of Milk's most devote campaigners.

Unlike many of the politically themed movies that arrived at multiplexes this year,Milk was able to tap into the human connections that make such public debates of political policy come alive and have real meaning in people's lives. If Hollywood wants to keep on getting on soapboxes at the movies,they would do well to try to talk to their audiences,not talk at them. There is a difference and Milk succeeds by knowing where to draw the lines:

Penn might actually have a good shot at winning. I didn't know that this had already come out.

Yeah,it's in limited release at the moment,with more theaters due to get it by early next month. Lucky for me,Milk slipped into one of the bigger multiplexes that's only a bus ride away:)

Penn does have a good shot,but I'm not sure if the current controversies surrounding Prop.8 will be a plus or a minus come Oscar time-some of those voters are very set in their ways.