Taking a gander at this year's Golden Globes

The Golden Globe nominations were announced early yesterday morning and many folks were up and about,ready to get the possible first scoop on what the Oscar race might look like.

As to be expected,there were some obvious choices and a couple of unexpected twists. Not everyone was happy but there were some smiles to be had. The Golden Globes covers both TV and film,but since it'll be awhile before the Emmys reappear on the pop culture horizon,I'm sticking to the movie side of the show for an overall view of the good,the bad and the "What the bleep were they thinking?" selections here.

WHY SO SERIOUS ABOUT AN AWARD SHOW?

Let's start with the King Kong sized gorilla in the room;yes,Heath Ledger did get a Supporting Actor nomination for his penultimate performance as the Joker in The Dark Knight. No doubt that it will lead to a similar posthumous spot come Oscar time.

However,many are disappointed that this was the only nom that the Dark Knight received here and are worried about the movie getting similar treatment from the Academy. Look,folks,I would love to see TDK get all the props it deserves,but big money making movies often get the shaft when it comes to being honored by those who are in charge of handing trophies for "artistic" achievement,it's sort of the nature of the beast.

Granted,the Globes are a little more lenient about such things(the fact that they divide the big movie of the year award by comedy and drama shows it)and typically wind up giving a bigger shot of recognition to mainstream fare. Even if they did throw a few more bones to The Dark Knight(Aaron Eckhart was just as amazing as Harvey Dent/Two Face in that movie),the Oscar crowd would still just put it up for a handful of technical noms,anyway.

THE LITTLE MOVIE THAT COULD

Slumdog Millionaire is one of the critically beloved films that do well on the awards circuits and also looks like an entertaining bit of art to boot.

The story of the film comes from a novel called Q & A by Vikas Swarup and it tells the tale of Jamal, a young man(Dev Patel) from the rough streets of Mumbai who winds up winning India's version of Who Wants To Be A Millionaire,mainly to impress the girl of his dreams,Latika(Freida Pinto).

The authorities are suspicious of Jamal's victory and interrogate him to see if he cheated. As he narrates the story of his life,it becomes clear that Jamal's whole life has lead him to this destiny. The movie is up for four Golden Globes,including Best Director for Danny Boyle(best known for Trainspotting)and Best Drama.

I'm happy to see a good movie like this benefiting from all of the media attention that critics and award shows can bring,but when it comes to Oscar,hopefully some of the actors will get some of that love as well: 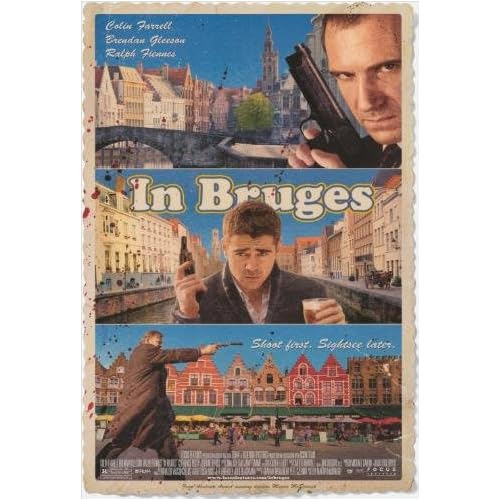 IS IN BRUGES WORTH ANOTHER LOOK?

In the comedy categories,In Bruges was given three noms,with two of them in the same section(Best Comedy Actor,for both Colin Farrell and Brendan Gleeson). I dimly recall this movie coming out in the spring and it being one of those that quickly came and went. The reviews were pretty mixed as well.

I haven't seen In Bruges yet and I really wasn't planning to,since the trailer for the film didn't impress me much. Perhaps I should add it to my Netflix queue and see if it's a worthy cinematic getaway or not: 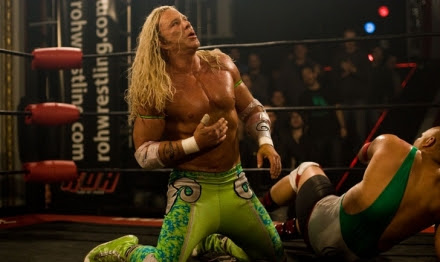 The Best Song category is still struggling to come up with something snappy and so far,the tunes chosen here don't sound like the kind you'd be humming on your way out of the theater. The strongest of the bunch is the theme song to The Wrestler,the arthouse Mickey Rourke film,which was written and sung by Bruce Springsteen. I have to admit that it's not bad,not bad at all:

But,my musical ear yearns for more than dutifully dull,play over the end credits songs that barely receive any air or video play,let alone a download. Why can't there be some sort of "Best Retro Use of a Song"(Mamma Mia! would certainly clean up there)or something like that?

If you must insist on sticking with music written only for the movie in question,I do hope that Hamlet 2 is not as overlooked at Oscar time as it is at the Globes. It would be so fun to see "Rock Me,Sexy Jesus" performed on stage at the Academy Awards,you know it would be! Oh,well,one can dream:

I've never actually paid any attention to any of the award shows except for the Oscars but I couldn't help but notice True Blood has gotten a couple of nominations!