Bad Movie Month shudders at The Haunting of Molly Hartley We wrap up our look at Terrifying Teens on Bad Movie Month by pushing forward the most awkward of them all,The Haunting of Molly Hartley. From the title,you might reasonably think that this is some kind of ghost story but no,that is only the beginning of the many false starts and promises that this glossy fear flick has to offer.

Our story begins(after a gruesome prelude where a teenage girl gets killed by her dad,due to wanting to get married when she turns eighteen,a very unlucky number in this movie)with 17 year old Molly,played by Haley Bennett,who has moved to a new town with her father as a way of starting after Mom took a pair of scissors to her chest.

Naturally,Crazy Mom is locked away in a mental institution that's conveniently located right outside of town(all the easier for Murder Inc. Mommy to show up later on)and Molly is suffering from some understandably natural flashbacks from that fun little incident,which includes hearing spooky voices,seeing strange images in mirrors and sudden noises that turn out to nothing more than a dog barking or mail being slipped thru the front door slot-eek,bills are scary!

At this point,the tone of the plot is being set up as either Molly is doomed to inherit her mother's mental problems and go off the deep end or that she is the target of some kind of evil plot that her delusional dangerous mother was only trying to save her from-"The darkness is coming for you!" Well,maybe paying that spooky light bill that startled Molly so much might be helpful there.

Things get off to a strange start as Molly has a panic attack in English class,with a bible causing her to have a major nosebleed. That's right,folks-if a bible gives you a nosebleed and makes you spaz out in the girl's bathroom,it's a sure sign of being marked by evil forces:

Eventually,both we and Molly start to see that this is a case of An Evil Destiny Awaits You,as things go on and Molly winds up breaking Mean Girl's arm over Future Rich Boyfriend,who turns out to be part of the sinister conspiracy. Crazy Mom breaks out of the mad house in order to wield a blade along with a lengthy explanation of what's really going on.

It turns out that Molly's parents sold their baby(who was stillborn)in order to have a child for at least eighteen years and then send her off to work for Satan. A couple of years later,this concept was the premise of the short lived series Reaper(with a more intently humorous theme and better writing)but that show didn't have creepy Christian characters whose only solution to Molly's moral dilemma is a one way ticket to the grave.

I'm not saying that there aren't people out there who take that eye for an eye business a little too far,but it's rather disconcerting to see the "good guys" in this narrative being more of a threat to the heroine than the villains:

Now,I'm going to do something that I normally don't for any movie review and that is reveal the ending of the film. The main reason for doing this is to demonstrate the worst aspect of the whole thing and why it was chosen for Bad Movie Month in the first place.

Also,this movie's been out for two years now and there are more spoilers a-plenty online,so if you're still reading this,you have been warned good and proper!

By the end run of the plot,Molly finds out that there is a secret society of Satan's little helpers that includes Future Rich Boyfriend and Sympathetic Guidance Counselor Lady,who tells her that the only way out of this evil indentured servitude is to break the pact by killing Dear Old Dad before the stroke of midnight on her birthday. 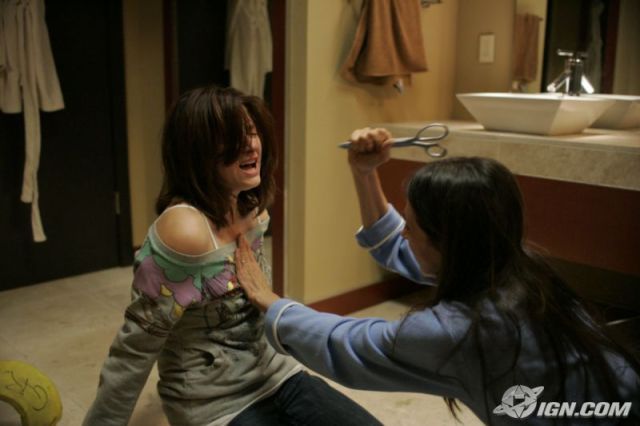 At the last minute,Molly turns the knife on herself but the death blow doesn't take. So,what awful evil fate embraces our leading lady there? Does she become the mother of the Anti-Christ,the new headmistress of a baby sacrificing coven or even a reality show star?

Nope-she just lets her dad rot away in the very asylum where her mother resided and goes off to graduate high school with top honors,with Now Permanent Rich Boyfriend on her arm as they happily climb into a limo and drive off into a brighter,college bound future with an upbeat song in the background.

I kid you not,folks-all of this flat footed frenzy and meandering mayhem about the horrible darkness that is after Molly and her fate is to be a rich,happy yuppie? That might have worked in the '80s but it really doesn't fly here:

Basically,The Haunting of Molly Hartley is a terror tease whose true crime is the killing of your time as you watch it. Don't be fooled by it's sleek young stars or seemingly sinister set-ups;this movie is quite the stinker. We here at Bad Movie Month hope you enjoy our Terrifying Teens series and we look forward to another fun theme for next year(the top runners in our poll were Lousy Love Stories and Vampire Vs. Werewolf). Until then,stay away from potentially satanic schoolgirls,folks-they always lead to trouble and fake out fear moments:

Huh?! Yeah I'm really, really glad I've only vaguely heard of this before. What an awful ending.