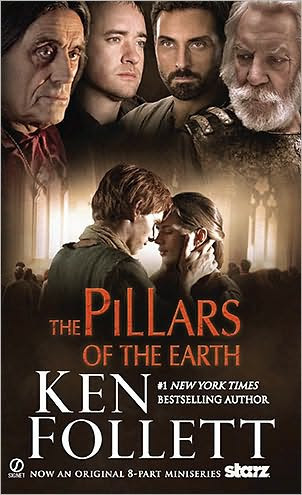 Hidden amongst the many specially scheduled for summer viewing shows on TV this season is a long awaited adaptation of a massively written book whose mass appeal matches up to it's page length.

Ken Follet's The Pillars of the Earth did well enough on it's own before Oprah revived interest in the book on her show awhile back. There was much talk of turning the novel into a film but with the various subplots and numerous characters that all formed pieces of the plot puzzle,paring this story down for even a three hour Hollywood film just wasn't feasible.

The best format for a book like this was the traditional TV mini-series,which is now being broadcast on the Starz cable movie channel this month(with replays available at Netflix and the official website for the series). It's an eight hour long production with several big name actors in the cast,such as Donald Sutherland,Rufus Sewell, Ian McShane and Matthew McFadyen.

Altho,this tale of intrigue and power play surrounding the building of a cathedral in 12th century England sounds very male centric,there are a good number of strong female characters essential to the narrative.

One of my favorites is Ellen(Natalia Worner),the mysterious woman of the woods who joins up with the family of Tom Builder( after the tragic death of his wife due to childbirth complications) not only out of attraction to Tom but to help her silent but smart son Jack(Eddie Redmayne)become part of the civilized world.

Another is Aliena(Hayley Atwell),the daughter of a nobleman whose choice to back the recently ousted Queen Maud in her battle to regain power from her brother Stephen backfires on him most brutally.

Aliena's wise refusal to marry the vicious William Hamliegh(David Oakes),plus the weakness of her brother Richard has left her perilously unprotected in such harsh times but fortunately,she possesses the cunning and determination needed to regain her family's fortunes and take vengeance on their enemies. Such a shame that steadfast women in those days had to work their ambitions through male surrogates but the practicality of certain situations left ladies in the lurch like Aliena no other choice:

As with any great historical saga,there are villains galore and most notable are the Hamleigh clan,who don't rejection kindly.

Along with nasty and superstitious son William and his devious deal making mother Regan(Sarah Parish)are headed up by ambitious yet far from clever father Percy(Robert Bathurst)who is quick to jump at any suggestion from plotting bishop Waleran(McShane)to gain a title from the king at any cost,provided the price isn't actually money.

The Hamlieghs succeed in their schemes at first but over time,their ill gotten fortunes will turn against them and waiting for their comeuppance is terribly suspenseful,I hope it will last but not too long:

The production values of this series are first class,with many of the cast members looking as if they stepped right out of the pages of the book. Some changes and slight twists to the story line were made but mainly in service to keeping the many characters and their plot points flowing smoothly along.

Ridley Scott's film company(along with a German/Hungarian film group)lent a hand into pulling this project all together and the care and attention to detail shows without being a distraction from the plot line.

Ken Follet's input was also a key factor in bringing the written story to visual life and with any luck,perhaps we will see POTE's sequel,World Without End,get the same stellar treatment. Follet has a new set of historical fiction on deck fro readers,starting with The Fall of Giants in late September,that might also make for great TV in the near future. It's always good to have the author on hand for these things,something that more and more Hollywood folks should keep in mind there:

New episodes of Pillar of the Earth air on Fridays(and replay online by Saturday)at 10:00 p.m. and I hope that newcomers to this story are as delighted with the series as many of the book's fans are. No doubt,quite a few of them are drawn to rereading the novel as I am doing right now and just as many are eagerly getting their own copies to follow along with the show.

It's rare that one version of a story can be well reflected in another medium but when it happens,it's a true artistic miracle. Don't look for too many explanations or over analyis,folks;just sit back and savor the saga spectacle as it marvelously unfolds: