Film maker Wes Craven is considered one of the modern day masters of horror movies as well a cult movie pioneer,much like John Carpenter or Tobe Hooper.

While he shares much success in common with his cinematic contemporaries by taking the medium and genre to new levels of visual terror that has paved a gory path for other future film folk to follow,Wes also has sunk to the same movie mill level by plastering his name on substandard flicks as a producer credit and seeing his best work being remade as fast food filler for the multiplex and direct to video market.

However,Wes has also made his fair share of cinematic clunkers over the years. For every great fear flick like Nightmare on Elm Street,audiences have also been tricked out of their ticket money by going to see sludge like Shocker or Vampire in Brooklyn. Today,however,we are here to salute the sorriness of one of his mid-eighties attempts at terrifying teendom with a high tech edge,Deadly Friend.

Deadly Friend is based on a YA novel by Diana Henstall which was turned into a screenplay by Bruce Joel Rubin,who went later on to create the scripts for Ghost and Jacob's Ladder(whether or not he improved from that point is debatable).

Our story begins with teen genius Paul (Matthew Laborteaux,fresh off of Little House on the Prairie)who has just moved to a new town with his single mom and his homemade robot,BB,that follows him around as Paul gets to know the other supporting players like local paper boy Tommy and cranky neighbor lady Mrs. Parker(Anne Ramsey of Throw Mamma From the Train fame),plus some mean biker guys who bully our hero until his faithful robo-buddy literally puts the squeeze on them.

Samantha,aka Sam,is played by a pre-Buffy the Vampire Slayer Kristy Swanson who did her resume no favors with this role,unless her career goal was to be a bad B movie star:

Soon enough,both Sam and BB are put out of commission-she by a fatal push down the stairs(Thanks,Dad!)and it from a shotgun blast by our handy mean old lady in the hood. Paul can't bear to lose either one of them,so he swipes Sam's body and plugs in BB's remaining memory chip in her head. That does revive Sam but the mix of her reanimated corpse with a jacked up robo-brain is not exactly peanut butter and jelly harmony.

Despite Paul's remote control,Sam refuses to stay put in his garage and starts off her new unlife by becoming a pretty little killing machine,complete with raccoon eyes,hands fixed into pincher mode and super strength to boot. Our undead heroine's reign of terror begins with a visit back home and it's not to wish her drunken daddy a Happy Father's Day:

The most gruesomely ridiculous act of vengeance by Robo-Sam is perpetrated against mean Mrs. Parker and no discussion of this movie would be complete without including the death by basketball scene. Turns out that the theatrical version of the film had to tone down some of the gore to avoid an X rating, but via the magic of DVD,this bizarre form of execution can now be seen in all of it's glory(it does get messy,you have been warned): 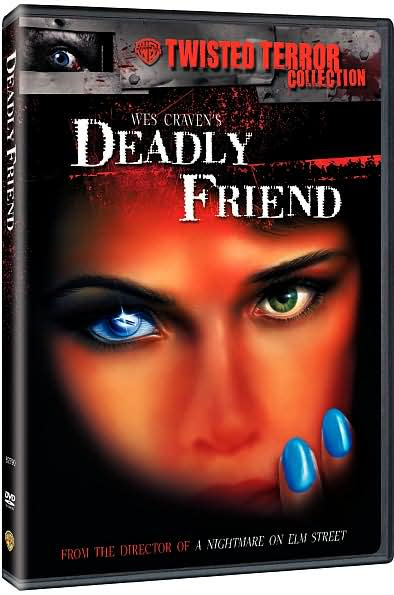 Believe it or not,there is serious talk about doing a remake of Deadly Friend starring Twilight's Kristen Stewart floating about Hollywood these days. The new version is said to be ready by 2011.

Usually the second time around is a sure sign of schlock but in this case,a vast improvement might be made on the source material. Then again,they're also talking about turning it into a 3D flick,so perhaps not.

Deadly Friend has blossomed over the years from a forgettable fright film into a cult classic gem beloved by horror fans and 80's enthusiasts alike. Whether you're looking for a seriously-so-bad-it's-good blast from the past or in the mood for a horrible hybrid of Bride of Frankenstein goes to Degrassi,this movie is your golden ticket to godawful cinematic delight:

I've never been overly fond of Wes Craven except where the Scream franchise is concerned. Did you know that they're filming Scream 4 now? I've never seen Deadly Friend before but even the trailer looks bad lol.

Yeah,I've heard about Scream 4 but since the third movie was such a clunker,I'm not thrilled to see another one lined up.

The Nightmare on Elm Street flicks that Wes is directly connected with are good and People Under The Stairs has it's moments(I even dig "Wes Craven Presents" Dracula 2000,total camp city),otherwise there's a take it or leave it factor for me with his work.