This year on Bad Movie Month,we're going with a theme for all of the less than stellar cinematic charmers being highlighted here and as your first awful appetizer on the Terrifying Teens menu,take a taste of Jennifer's Body.

The main attraction of the plot(and the marketing for this film)is Megan Fox,the Jennifer of the title,who is a small town mean girl with her loyal retainer Needy(Amanda Seyfried)constantly in tow,despite the fact that nerdy Needy has an attentive boyfriend on hand.

One night,Jennifer drags Needy along with her to the local pub in order to catch a Gothy indie band(with Adam Brody as the obnoxious lead singer)and when the place inexplicably burns down,Jennifer takes off with the band who are on the prowl for a virgin to sacrifice to Satan as a fast track to musical fame and fortune.

Turns out that Jennifer is not a virgin(color me shocked;not to mention how stupid is this rock band that they go looking for a virgin at a bar?)and instead of dying,becomes a vicious succubus who needs to feed on human flesh so that her demon energy can keep her hair nice and shiny.

Needy does get a clue about her BFF's new attitude,especially when Jennifer shows up in the middle of the night to puke black slime on the kitchen floor.

Later,in a bizarre girl talk scene,Jennifer recounts the tale of her first victim,who just happens to be the only foreign exchange student in town and who conveniently escaped from the bar fire without anyone noticing! What a lucky girl that Jennifer is!:

As is the way of these things,it falls upon Needy to stop her friend's grisly reign of terror by reading up on demons and having bitch fights with her. The movie's script was written by Diablo Cody of Juno fame and it's chock full of so-called hip teen dialogue such as "Hey,Monistat-What's up,Vagisil?" and "His mom's acting like a zombie robot mannequin"(which is actually a good description of Megan Fox's performance).

The trying to be trendy dialogue is bad enough without the half hearted mix of teen movie metaphors from the likes of Heathers(with the evil rock band's annoying song becoming a hit and everyone adoring them without question)and other better movies that barely stick to wall of plot points when thrown,not to mention the gratuitous riffs on pop culture.

The worst pop culture reference moment has to be when the rock band starts singing "867-5309/Jenny" to their terrified captive before "going Benihana" on her-it's neither funny nor scary,just sickening to watch and listen to. Equally sickening is the comment Jennifer makes earlier upon picking Needy up for their night out while boyfriend Chip Dove is still around-"It smells like Thai food in here. Have you guys been f**king?" I have nothing against witty profanity but there has to be some wit in the first place to make it work:

The big showdown between the girls on prom night,with Chip as the bloody chew toy being pulled apart here,amounts to not much more than a slightly gory mall bitches session from an MTV reality show than an epic battle of good vs. evil. Jennifer may be able to float in midair and whip out some snazzy sharp teeth on command but cracks about her weight loss regimen cut like a knife into her hot evil chick armor: 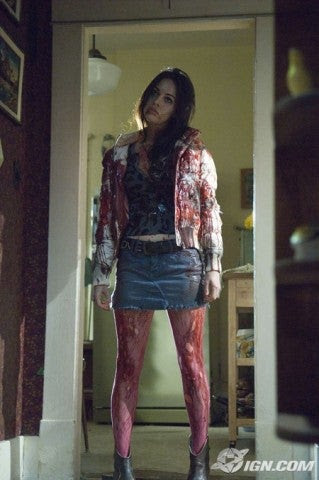 Like many a maudlin horror comedy before it,Jennifer's Body can't maintain the balance between it's two genres and just winds up becoming a prolonged tease of a movie that is as disappointing as ordering a chocolate ice cream sundae and getting served liver and onion flavored yogurt instead.

Despite Megan Fox's current status as box office poison(due to Jonah Hex and not being cast in the next Transformers sequel),the film fail here can not be rested solely on her shoulders.

One of the other main selling points of this allegedly funny fear flick was Diablo Cody,who claimed to bring a feminist flair to the project. Sorry,sweetie,but your story played right into the traditional male gaze features of the typical teen horror film like a violin and a few far from hip quips are not enough to elevate it any higher than that. Leave the cultural subversion to the pros,honey and spare us the sorry snaps next time: