When movie merchandising gets way out of hand As a unashamedly proud fan girl of many commercial genres, I am one of those who are thrilled to own movie/TV related products of all kinds,from the True Blood Fangtasia T shirt bought for me on my birthday(thanks,Sis!)to the Corpse Bride throw blanket on my bed and the Sin City action figures on display with my books.

However,even I am gobsmacked by the latest tie-ins to the upcoming adaptation of Eat,Pray,Love,due to hit theaters this Friday. Sure,having a T shirt and jewelry inspired by the book and film is cool for the fans and making a special brand of EPL tea seems to be a savvy as well as sensible marketing move.

Yet,some of these products are a tad odd to be connected to a film that purports a serious mind set,such as furniture,dishes and bed linens. Yes,my friends,you can have your very own EPL blankets,sheets and embroidered pillow cases straight out of Home Shopping Network.

How is it that some people would sneer at me or others such as myself for having a Nightmare Before Christmas throw but think it's fine to have an entire EPL bedroom set? Not to mention that all this materialism doesn't quite fit in with the theme of embracing a more spiritual approach to life there,to me. To each their own,I say but this is just going overboard,if you ask me: 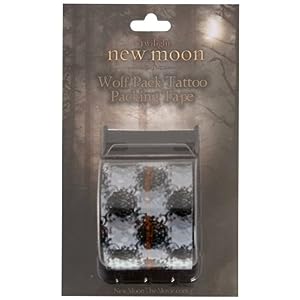 You have to draw the line somewhere,particularly with the tight budget everyone has to live with these days. For example,as much as I love the Twilight series and enjoy some of the products associated with the movie versions(mainly the candy),buying the Twilight:New Moon packing tape was just too silly.

I actually saw this on the discount table at a Hot Topic recently and even then,I was unwilling to get it. Werewolf packing tape is not a great keepsake;once you use it,the tape winds up being cut and thrown away. Even a Twilight pencil case would last longer than that(yes,they do make them,I kid you not)!

Also weird to me is making a Mr. Potato Head version of Iron Man as a tie-in to the sequel. First off,the target audience for that toy is way too young to sit through an Iron Man movie(it's more of a Toy Story 3 crowd)and secondly,even the most die hard of comic book devotees might be a little embarrassed at putting "Tony Starch" in their Marvel collection. Then again,maybe not,it is kind of cute.

Movie merchandise is apparently not just for kids anymore,as Sex and the City 2 proved with specially made vodka and a thong panty set. Instead of days of the week printed on your underwear,you can choose SATC character colors like Carrie's Lipstick Pink or Samantha's Seductive Black.

Pardon me for being catty for a moment but is keeping underwear on something that these gals are really known for? Offbeat movie products are not limited to the U.S.A-as part of the promotion for Daniel Craig as the newest James Bond in Casino Royale,a smoothie company over in England put out "ice lollies" shaped like the star himself,in shirtless torso form.

Bond is big over there,naturally and while plenty of folks would love to devour him with their eyes,doing it somewhat literally is slightly disconcerting,to say the least. Plus,the flavors were blueberry,pomegranate and cranberry,not too sexy there. Passion fruit would be a better choice or your basic orange,cherry and grape. Hey,if you're going to make creepy sweets,at least make them tasty.

Well,perhaps all of these EPL products will help to bolster the film's box office take this weekend,especially since the cinematic competition is rather fierce, even for August.

Along with the long awaited Scott Pilgrim Vs. The World,the mega action flick The Expendables is also due to arrive with a mother load of action movie vets on board and lead by Sly Stallone,with cameos from Bruce Willis and Arnold Schwarzenegger as added incentive.

Their merchandise is pretty standard but what they lack in tie-in products,they're making up for in fan love,which is one item that can't be bought at any price. Also,having a sense of humor as a selling point helps out as well:

I've always thought movie merchandise was neat. I don't know why people would want some of those things but I still think it's neat :)