Are Book Reviews An Endangered or An Evolving Species? 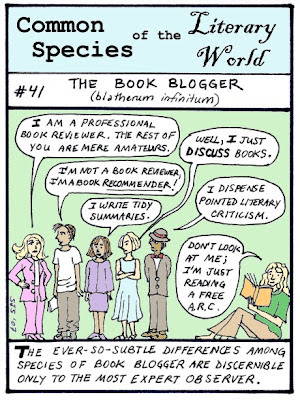 The latest hot topic on the literary scene is the current state of book reviews. Many newspapers across the country are either cutting down on their book sections or, as with the Atlanta Journal-Constitution,eliminating staff members such as AJ-C's book editor,Teresa Weaver. A petition has been started up to save her job and other folks are encouraging newspapers not to give up on book coverage just yet.


It's a shame,when books are not seen to be as important as,let's say,a baseball game but what really saddens me is that a number of people are blaming blogs for this cutdown on reviews. Author Richard Ford was qouted in an article about this in the New York Times,saying that he doesn't trust the opinions of a blogger(he claims not to read litblogs,btw) and that"“Newspapers, by having institutional backing, have a responsible relationship not only to their publisher but to their readership,... “in a way that some guy sitting in his basement in Terre Haute maybe doesn’t.” 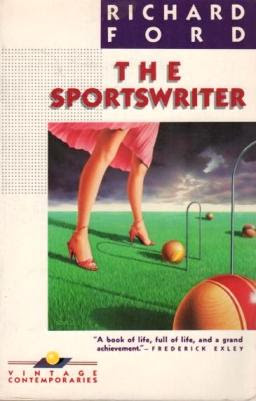 First off,what do you have against Terre Haute? Second,newspapers are a corporate industry and are ultimately responsible to their shareholders,like it or not. Ford also said that newspapers should run book reviews"“as a public service, and the fact of the matter is that they are unwilling to,”-hello,reality check,please!

Newspapers are a business and in business,cuts in departments are all about money. It's like funding for public schools,everytime they feel the need to trim the budget,the arts are the first to put up on the chopping block while the football team gets new uniforms. Does that make it fair or right? No,but it is the reality of the situation.

I hate to see anyone lose their job,or have it chopped down into little tidbits but shouldn't the focus on this probelm be dealt with by trying to find ways to increase interest in book reviewing,instead of tearing down litbloggers? Take a gander at what Michael Dirda,Washington Post book columnist had to say about this subject in a recent post at the NBCC blog,Critical Mass:

"Every blogger wants to write a book. In fact, the dirty little secret of the internet is"Littera scripta manet"--the written word survives. A book is real, whereas cyberspace is just keystrokes--quickly scribbled and quickly forgotten. But to publish a book isn't enough: It has to be noticed. And this is where book sections matter. If you were an author, would you want your book reviewed in The Washington Post and The New York Review of Books--or on a website written by someone who uses the moniker NovelGobbler or Biografiend?(note: two new blogs with these titles have been started up,in response to Dirda's comments)


The book review section, whether of a newspaper or a magazine,remains the forum where new titles are taken seriously as works of art and argument, and not merely as opportunities for shallow grandstanding and overblown ranting, all too often by kids hoping to be noticed for their sass and vulgarity. Should we allow our culture to descend to this playground level of discourse? Newspapers sift, filter, and evaluate; they are responsible and strive to be trustworthy. So, too, do their book review sections. To curtail such coverage is to abandon an intellectual forum for a childish free-for-all. We would be shortchanging not only readers, but also the art, culture and scholarship of our time.Playgrounds, as we all remember, are ruled by bullies, loud-mouths and prima-donnas."

You'd think a journalist would know better than to make broad,sweeping statements dripping with elitism like that. Why is it that when disagreements spring up in the literary community,folks react like Jerry Springer guests,turning on each other instead of teaming up to help one another? With attitudes like this,is it any wonder that more and more people prefer to get their book reviews online? It's hard to listen to the concerns of the newspaper writers,when folks like Dirda are making them all sound like this:

Listen up,guys-litbloggers are not the enemy. They care as much about books as you do and most of them aren't lucky enough to be paid to do it. No one wants there to be less coverage of literature and as readers,being open minded to new possibilities comes with the territory. Not everyone blogging is a punk kid,out for fame and believe it or not,a good number of them are just as well educated as you are. Some may be snarky or snippy but so are many print journalists out there. As for newspapers be more "discerning" about who and what gets published,does the name Jayson Blair mean anything to you? Nobody's perfect,folks.

PW editor-in-chief Sara Nelson took up this topic in her recent weekly column(which you can read in full by clicking the title link above)and her view of the whole situation is a healthy one:

"I admit that on some days, I have a very Pollyannaish approach to all this, and can even believe—okay, make that wish—that traditional, learned book reviews won't be dead forever and that the Web is no graveyard, in any case. I also hope that the remaining book reviews will pay attention to people like the guy who spoke up at a an L.A. panel about how “boring” and “exclusionary” traditional book reviews are—and change.

Sounds right to me,Sara. Maybe we should all examine the current state of mainstream book reviewing and discuss why it isn't working. Why genre titles get overlooked,why certain nonfiction gets plenty of coverage while many first,second or fourth novels are begging for attention and ways to liven things up alittle. Maybe we could all learn something from each other,as well as talk about some good books. That is the reason we're all having this hullabaloo in the first place.
Posted by lady t at 10:25 AM

Great post, Lady T. I, for one, love how democratic the blogosphere has made so many things, from literary criticism to political commentary to news gathering.

And I think the fact that there are so many bloggers publishing book reviews without being paid for the job speaks to their devotion to books. What could be wrong with that?

Thanks,Robin-It's good when folks take positive advantage of the internet to reach out to others in a thoughtful and useful way. Too bad that some people just can't handle that.

Book reviews are evolving,which as you know very well,is the way that older forms can survive and grow in a new atmosphere:)

Thank you so much for posting about this! I think it's so sad that someone would call a blogger unprofessional. Last time I checked, a review is an opinion, so who has the right to say whose opions we should listen to. As a matter of fact, I get some of my best ideas from reading other people's blogs. And because they're free, poor little me can actually access them and learn... and grow! =)