I am ,pun intended,a sucker for most vampire shows and can fully recognize the signs of being addicted to any TV program bigtime. Symptoms include constant thoughts about the characters,wondering what plot points will turn up next and wanting to know more. Blood Ties is high on that list at the moment,neck in neck with Heroes at this point(and that's no easy climb,I assure you). Never thought that I would get hooked on any show on the Lifetime channel but they say never say never for a reason,folks.

So,what is Blood Ties all about? It's about Vicki Nelson(Christina Cox),a former homicide detective turned P.I.,who left the force due to a degenerative eye condition that is slowly blinding her. Vicki is a tough,take charge kind of gal who winds up in over her head in supernatural cases,like demons trying to release their more powerful masters,thanks to the greed of a nerd,people raising up zombies for revenge or pay-per-view fights and seductive gorgons turning men to stone.

Fortunately,Vicki has plenty of help on hand,including not only former client turned assistant Coreen and former partner on the force Mike Celucci(Dylan Neal) but Henry Fitzroy,debonair vampire and graphic novelist. Henry is the bastard son of Henry the VIII,who at first reluctantly and then later eagerly joins in to give Vicki some supernatural back-up. Naturally,he and Mike get along in a mature and mutually respectful fashion...not!:


While Vicki is not in an out and out romantic relationship(yet)with either of them,the tension is there. It's one of the strong points of the show that the love triangle is not totally dominating every single storyline. We get to focus on other things,like Vicki's coping with the fact that she's not a active policewoman,Henry's past lives and Coreen's growing knowledge of otherworldy lore. Plus,there's some nifty dialogue riffs and interesting takes on mythological monsters. Blood Ties is not quite Buffy material but certainly not kitschy Charmed antics by any means. 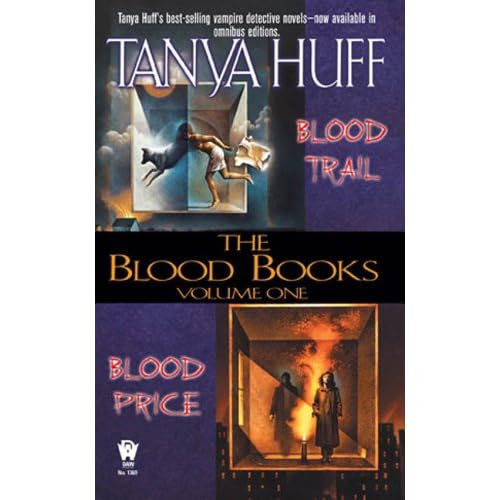 Blood Ties is based on Tanya Huff's series of Blood Books and the author herself is very involved with the TV version. She even has a blog on the Lifetime website(which you can check out by clicking the title link above),where she talks about each episode and gives her thoughts about the direction of the show.

I've just started reading Blood Price(which was made into a two hour pilot for the Lifetime series)and it's a really great book so far. You know how you watch a movie or a TV show and then measure it against the original book it's based on,checking for this off detail and that? It doesn't matter in this case. One form of the story makes you truly appreciate the other. I am glad that Blood Ties made me discover Tanya's books. As much as I enjoy Kim Harrison,Charlaine Harris and MaryJanice Davidson,it's always good to seek out new horizons in the paranormal fiction realm.


The season finale of Blood Ties will be airing next Sunday and hopefully,this is not the last we'll see of Vicki and her men. It's nice to have a strong female lead who has two capable and challenging fellas fight for the right to be her main man in her life and it is a right that has to be granted by the lady herself. If it was my choice,I'ld go with Henry but that's just me and my fancy for bloodsucking sweeties. Who ever and what ever Vicki choses to do,I would be happy to follow her along. Let us all keep our fingers crossed that Lifetime gives us that chance next year.