Shear Genius is getting close to the finish line,and the Final Four stylists were Anthony,Daisy,Ben and Dr. Boogie. They were eager and abit nervous for their Shortcut Challenge,which was to straighten African-American hair:

Dr. Boogie was the only one to use chemical relaxers and while it did help straighten the hair,the guest judge, Kiyah White, was not pleased with the hair style he gave his client,saying it made her look too old. Anthony won the challenge,which gave him first choice of look for the Elimination round and to also hand out the rest of the assignments to his fellow stylists. This week,they had to design hair for a professional photo shoot,with celebrity photographer Matthew Rolston.

The four looks that they had to create were: Sex Kitten/Wet Hair(Daisy),Rebel Rocker/Vertical Hair(Ben),Diva Star/Lighter than Air(Dr.Boogie) and Retro Glamour Girl/Horizonal Hair(Anthony). Anthony had a real hard time with his photo shoot,since it was important that the model's roots be concealed and it took extra time for him to fix it during the shoot. He managed to make it work,but it cost him sone points during the judging.

Daisy,however,rocked the place with her successfull wet and wild look. She and Ben(who had to pull off his rocker girl look pretty much at the last minute)were the Top Two and instantly in the finals. Daisy was named the overall winner,and she really deserved it. Her work has been consistant thru out the competition and she's such a sweetie! I'm rooting for her to win,but do love Anthony as well.

Alas,Dr. Boogie,we knew you well. As much as I dig his crazy antics,his ego sandbagged him here,with his constant interruptions to fiddle endless with the model's hair. She was supposed to have "lighter than air" but all of the weaves the good Doctor put in weighed the hair down. My father once told that with art,you have to know when to stop and leave it be. Dr. Boogie proved that point here.

So,we have Anthony,Daisy and Ben for the Finale,which will be next week. On the Shear Genius reunion special,most of the ousted stylists picked either Anthony or Daisy to be the winner. No love for Ben! Actually,it is really anyone's game here but I do wish that my girl Tabatha had made it to the end game.

Atleast she won the Bravo Fan Favorite contest and recieved a sweet ten grand for her troubles. She also got her own special phrase,"Tatitude"(that should look great on a T shirt)and Tyson said she was the "best number 11(on a scale of 1 to 10)bitch" he ever worked with. High praise,indeed! Everyone seemed to have a good sense of humor and fun about the whole show,which means we may get a season two. Let's keep our fingers crossed,shall we? I know I will!

Jordin Sparks was the winner on American Idol and the universe was put back in order once again. Most folks were betting on her to win after Blake did his beatboxing best to sing the finale song but it was clearly meant for someone capable of pulling off a power ballad. The finale show had the usual jokes about itself(a little of Margaret Fowler goes a long way) and some nice performances(Gwen Stefani and Bette Midler were my favorites)but couldn't go without subjecting us to one more Sanjaya number. Any way,it's all over for now and congrats to Jordin:

THIS IS HER NOW 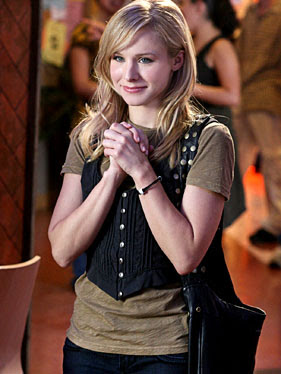 The last two episodes of Veronica Mars aired on Tuesday and while they were great season enders,I don't feel that they were a good way to let the series end. Obviously,Rob Thomas and company were hoping for a season four(which they and the fans of the show deserve)and the set-up looked promising. Vinnie Van Lowe possibly becoming the new sheriff,Keith going up on corruption charges,Dick having a mini meltdown over how he treated his brother(and actually apologizing to someone!)and a return appearance by Jake Kane. *Sigh* Perhaps that pilot episode of Veronica working at the FBI that they filmed and were considering go with will be put on DVD. We did at the very least,get to see Veronica go into major league payback mode once again:

Heroes: Despite some of the fanboy disappointment,the finale kicked some excellant butt and settled quite a few scores,like this one between Sylar and Hiro,who did look badass with that sword:

I also loved the tantilizing teaser for Season two,with Hiro arriving in feudal Japan-the fangirl in me was squealing in delight at that! Word has it that Peter,Nathan and Sylar will be back next season(I'd like to see that explained,thank you very much!)and perhaps the Season One DVD will give us a few hints about what's to come:

Bloodties: Vicki Nelson and friends end their first season well,and no,there's no hookup between Vicki and Henry just yet(they came pretty close there but no cigar). I did like seeing Norman return as a geeked up yet deadly demon(not to mention Vicki and Henry getting to act out of character)and hope he makes another appearance the next time around:

Ugly Betty: My god,how sad was that finale? Betty's dad is stuck in Mexico,Alexis and Daniel are in a major car crash(not smart to be driving your dad's car after putting a hit out on him,Alexis!),Clare breaks out of jail to stop Wilhemina from marrying Bradford,Henry goes back to Tuscon with Charlie(who's probaly carrying another guy's baby!)and poor Santos....having Justin sing the all too eerie West Side Story songs just added more sting to the punch:

Ben Gumped his way through this competition. I'd bet on Daisy. Heroes rocked! Hopefully, they won't make Jordin lose a bunch of weight to conform to some narrow defination of beauty.

I hope they don't force some terrible makeover on Jordin either-we like her just the way she is,thank you very much!

Daisy is my top choice but I won't feel too bad if Anthony wins. Ben seems to have gotten thru on sheer luck which may run out towards the end.