Sena Jeter Naslund gives us an Abundance of literary joy 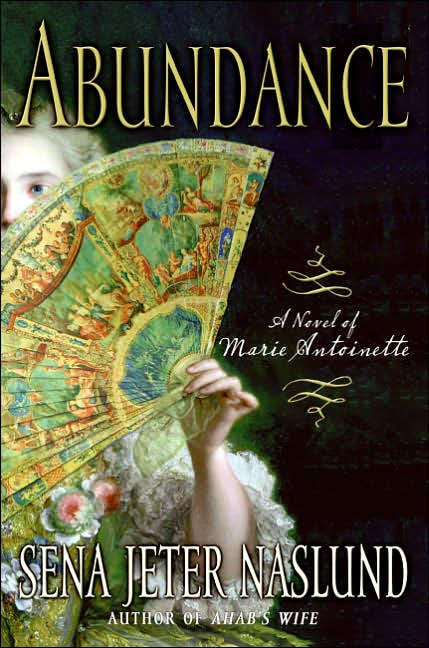 Sena Jeter Naslund's new novel,Abundance,begins with Marie Antoinette's journey to France where her marriage to Louis the XVI will form an alliance between Austria and France. Marie must show her acceptance of her new country by being stripped of her Austrian finery and former possessions literally in front of witnesses and redressing in the french fashions of the day.

This ritual becomes symbolic of what Marie's life is like as princess and later Queen of France;everything in her life is on constant public display and nothing is private,especially the troubles in her marriage bed. Her young husband treats from any kind of sexual contact and prefers to be hunting or working in his blacksmith shop rather than be intimate with his bride. Marie also has to contend with the various politics at court,both for and against her as well as find ways to amuse herself with or without her husband's company.

Marie Antoinette has been a historical lighting rod for both praise and censor. Naslund's novel portrays a determined young woman(Marie was fourteen when she was married)who only wanted to make the best of what life and her lineage had given her. Rather than being the Paris Hilton of her time(as many detractors past and present have made her out to be),Marie did care about the world around her but was limited by her status as a royal female in the French court to connect more. Yes,she was frivolous at times and made rash emotional choices which only shows off her humanity and vulnerability to a shimmering glow in such an opulent setting as Versailles.

Naslund brilliantly recreates the world that Marie dwelled in,with all the lush surroundings and political pitfalls that dogged her every step. It's hard not to understand the lure of having beautiful clothes and gambling parties to ease the loneliness and frustrations that Marie dealt with on a daily basis but part of you wishes to warn her of what lies ahead,as more of the outside world threatens to tear down the lavish walls around the Royals.

As Naslund did with Ahab's Wife,her words unleash a string of historical images and strong characterization that gives the reader a true time travel experience. She blends research and empathy to bring Marie Antoinette to life on the page. With the new Sofia Coppola film about Marie about to hit the theaters,this novel(not officially connected to the movie) will either enhance your cinematic pleasure or provide an excellant alternative to it. Please click the title link to find out more about the book and author. Abundance is a real gem of a read.
Posted by lady t at 10:51 AM