Veronica Mars,South Park and the Project Runway Reunion gets some Serious Ugly

On the reunion episode of Project Runway,it was hard for me to decide who was the bigger jerk;Keith,with his conspiracy theories about his books"being taken away and later returned"(why did you bring them at all,Keith,when you weren't supposed to?),Vincent and his egotastic remarks about everyone else being"amateurs" and Jeffrey still refusing to be at all sorry about lashing out at Angela's mom.

It wasn't a total nasty-fest;there was plenty of good natured fun goofing on Tim Gunn's fanciful language and just how chatty Kayne was(that word count clock put upon his presentation to Miss USA was the best).


Michael won the Fan Favorite prize and deservedly so. I really hope he wins the competition. Michael has the strongest sense of style,he's the most consistant and a truly good person. As much as I adore Uli's magic with patterns and respect Laura's top notch seamstress skills,it ought to be Michael's victory. Next week gives us Part One of the season finale and from what I hear,Laura will be accusing Jeffrey of cheating! Dum Dum DUM! Dramatime! 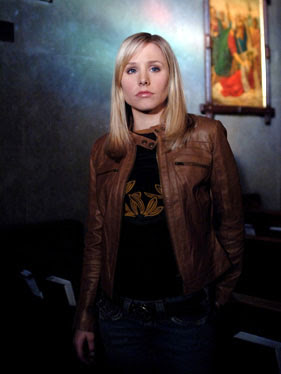 The season premiere of Veronica Mars has our girl enrolled at Hearst college,making new friends and enemies(especially the T.A. in her Intro to Criminalogy class,Timothy Foil-how great a name is that?). I'm glad to see Mac becoming a regular cast member and if I was her,Dick would've been popped in the mouth for that vicious comment about her and Cassidy. Wallace's roommate,Piz,is a good addition as well. The new credits intro is very WBish and the theme song sounds best when fully cranked up but otherwise,it looks like Ms. Mars has settled into her new network and timeslot well.

South Park's tenth season opener ripped on the realm of online RP gaming with "Make Love not Warcraft" that had the boys vegging out to defeat an evil gamer who kept killing off everyone's character. I've never played World of Warcraft but the graphics reminded me of Golden Axe,an old school video game that had the same kind of magical medieval quest types. Pretty funny,especially with Stan's dad getting in on the whole LOTR uberseriousness of WoW and Butters only wanting to play Hello Kitty Island Adventure. Saw the premiere of Freakshow afterwards and it looks a hell of alot better than Drawn Together(why that's still on the air is beyond me).

The Amazing Race: The Daddy-Daughter team was knocked out of the running,just as I was getting used to them,too! Tim and Terry(I like the nickname T&T that other teams have given them)really cut it close there,having to take a timeout before being checked it at the PitStop. That's why it pays to follow the rules,people!

Gilmore Girls:Happy to hear that Lane is pregnant,even if she doesn't like sex and Lorelai's Asian tour for Rory was very sweet and snappy. However,I need some Richard and Emily time to truly feel like this is GG in the house. Luke punching out Christopher was awesome-he should hit people more often.


Smallville: With Lex now de-Zoded(and was it just me or did the Zod entity look quite abit like Terrence Stamp?)and Chloe hooking up with Jimmy Olsen,it looks like Clark has to start this season off with some new focus. Those Phantom Zone escapees will be giving him some trouble soon but tonight's show has Lex in jep and Clark gaining yet another ability,superbreath.

Superbreath? I certainly hope it's at least minty fresh.

I missed the Project Runway reunion. I'll have to catch a repeat this weekend.

I think I'm the only person on the planet (certainly the only gay male) who has never seen an episode of Project Runway.

My roommate "upgraded" our cable service, and we lost Bravo.

That stinks,PJS-Bravo's a pretty good channel! They used to rerun Bravo shows like Queer Eye on NBC but not so much anymore. The first two seasons of PR are on DVD,so you can rent them to see what the fuss is all about.

You'll like the reunion show,PCD,lots of feudin' and fussing!