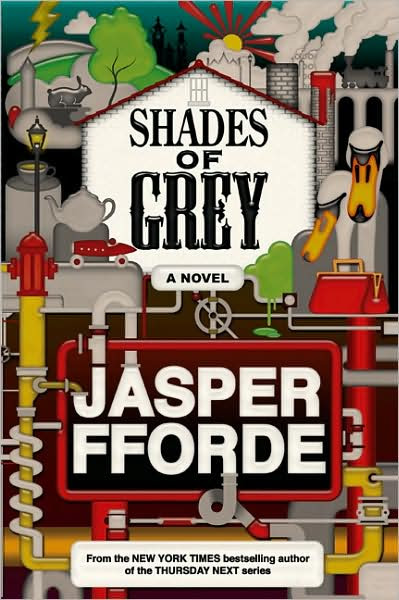 Eddie Russet lives in a world dominated by color-the kind that each person can see determines their status in life and just how far he or she can go up or down the Chromatic social ladder.

Eddie hopes to improve his station as a Red by marrying Constance Oxblood and inheriting the string works that her well to-do family runs in their respectable town of Jade-Under-Lime but instead,he and his father get transferred to East Carmine,a place on the "Outer Fringes" where even the sacred Rules of their society are twisted and turned in all sorts of ways both good and bad for the locals of all hues.

While on their journey into East Carmine,Eddie and his father(a swatchman who uses colors to heal people of just about everything except the dreaded Mildew)stumble across a mystery involving one of the oppressed Greys trying to pass for a highly touted Purple which leads to Eddie spotting Jane,a rebellious Grey girl with a very attractive nose,and following her down a path of revelation into the hidden secrets of their tightly structured society.

Jane does threaten to kill him quite a bit,but she's only one of the many dangers of being a resident of the Outer Fringes. There's ball lightning,carnivorous plants called Yateveos(which Eddie has more than one nasty encounter with), the strong possibility of being forced to marry a pushy Purple named Violet DeMauve and losing too many credits in order to get married in the first place to worry about,not to mention being caught out after dark and deadly swan attacks:

The longer Eddie stays in East Carmine,the more questions about the meaning of the restraints that his world insists upon,due to the Something That Happened in the Previous existence,crop up. Why are spoons in such limited supply? Is it fair to make the Greys do all of the hard work for everybody and does that justify them getting first dibs on the morning bacon?

Why are Yellows such ill tempered people and what sinister plot does the Yellow prefect Sally Gamboge and her obnoxious son Courtland wish to cover up from prying eyes? By being more observant than he should be,Eddie becomes a target and an unwitting ally to more than one of the hidden forces at work in their small section of the Collective:

Eddie,with the reluctant help of Jane and various other odd friends and foes,must ultimately decided whether or not to make a stand against the status quo and subtly subvert the system before being Rebooted for good.

Shades of Grey is meant to be the first book in a new series by Jasper Fforde,who amused many readers with his quirky bibliophile set of thrillers known as the Thursday Next books and then later with an entertaining spin-off of sorts called Nursery Crimes.

Fforde is one of those charming British writers who make mixing whimsy with social satire seem as easy as pie. I adored the Thursday Next books and even if you've never read those,Shades of Grey is a delightful introduction to the offbeat yet enchanting worlds of imagination Fforde has dreamed up that,in some ways,hit very close to home in showing us the absurdities of our need to impose social order upon others.

Shades of Grey will be available this week at a bookstore near you and it's a definite must-read that will start your New Year off right. It's good to get in on this color scheme early before too much light on the subject blinds you to it's bizarre brilliance: