Christmas Eve is upon us,folks,and once again,it's time to showcase some holiday music to tide everyone over during these hopefully happy days.

As some of you may know,we here at LRG tend to look for Xmas music videos that are rather offbeat and/or oddly nostalgic in order to add a little spice to our funky fruitcake. With that in mind,if a couple of these tunes have a strange sensory aftertaste to your ears,there should at least one that cleanses your auditory palate.

Our first musical selection is a favorite of mine that was hard to find last year and while an amusing substitute was discovered,I am very glad to see that it's back for public viewing. The homemade charm of this lip sync with it's toothpick animation has become a annual must-listen for me and I'm happy to share with you all this version of "Christmas Wrapping" by the Waitresses: 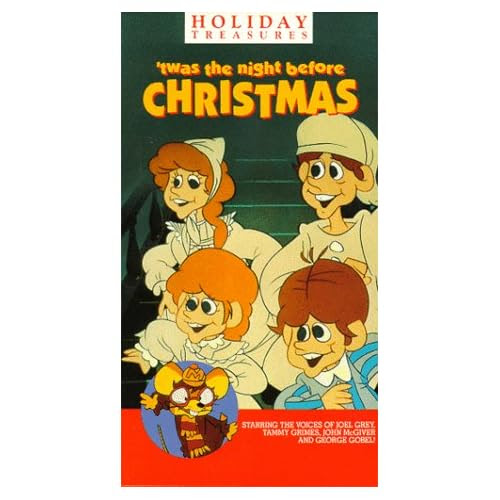 Next under the tree is "Even a Miracle Needs a Hand" from the animated TV special 'Twas the Night Before Christmas that first aired on CBS back in the seventies and is on the rotation list of ABC Family's 25 Days of Christmas.

The show weaves a story line around the classic holiday poem in which a small town is depending on the local clock maker(voiced by Joel Grey)to build a musical clock tower as an incentive to Santa not to pass them by. The need for that is due to a Letter to the Editor(written by a mouse child)that dissed the holiday and in this number,the clock maker encourages his family to keep the faith in him,which also moves the cynical little mouse boy as well:

Another cool track from the original A Very Special Christmas album is John Cougar Mellencamp's "I Saw Mommy Kissing Santa Claus". Yes,folks,this song was part of his in between name change playlist,starting with John Cougar and then adding his real last name on to that and ending with dropping the Cougar altogether. Personally,I think John Cougar Mellencamp had a interesting ring to it,but oh,well:

This was quite the find;Olivia Newton-John appeared in a made for TV film in her homeland of Australia back in the mid-1960s called Funny Things Happen Down Under and yes,there was a Christmas scene in it that required her to sing. Here for your audio/video pleasure is "Christmas Time Down Under"(so weird to see her as a brunette!):

Recently,the pop band Blondie reunited and as part of their promo push for their upcoming new album next year,they released a very rocking version of "We Three Kings". This is usually a song that's sung slowly and somberly but this much livelier version does the tune justice and makes it a carol worthy of busting a few moves to on the dance floor:

Time to wrap things up with an always welcome dose of ABBA and best wishes for everyone out there to have a Happy Christmas. See you all next week,as we start looking forward to what should be a Happy New Year:

Great video choices! Twas the Night Before Christmas was on TV last night when I was making cookies. Love this song!

Hope you had an exceptionally happy holiday this year :)