The delights of Downton Abbey draw to a close

Many of us this past weekend reveled in watching the last chapter of Downton Abbey and are already keenly feeling it's loss from our viewing schedule.

Even tho a second season is underway in England and the DVD of the first season will be available soon,this cast of characters has quietly but quickly gained some serious fan love in our hearts. There are many reasons as to why such an old fashioned saga has done so well with audiences both in Britain and the US,however for the sake of brevity,I will highlight only a handful of them as a means of easing our collective pain: 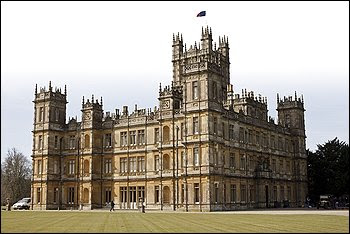 A MAN'S HOME WAS TRULY HIS CASTLE

Echoing the high drama above and below stairs at Downton Abbey was the grandeur of the house itself. While the servants' quarters were created by necessity at Ealing studios, an actual castle was used as the Crawley estate.

Highmere Castle was one of the many locations that lent an air of authenticity to this production and was as important as any of the actors in bringing this long ago world to life. Part of the fun of a show like this is being able to soak in the exterior beauty of the surroundings,a cup of visual cat nip tea for Anglophiles in particular:

A SERVANT'S WORK IS NEVER DONE

While the inter dynamics of the Crawley family are engaging,a strong section of the story telling spine belongs to the staff at Downton whose lives may be just as affected by the entail upon the estate.

Elements of class and social struggle abound here,from parlormaid Gwen's determination to become a secretary to the scheming by foul hearted Thomas and lady's maid O'Brien against the slow but steady of character Mr. Bates to a peek at the past lives of Mr. Carson and Mrs. Hughes,who rule their roosts with firmness and understanding at times.

What's most fascinating about the lives of the servants in this time period is that they are,even in off moments,always considered to be on duty. Entering "service" in such an upper-class household was like joining the military;codes of conduct and attire had to be adhered on a daily basis. To overlook even the smallest detail or crack wise about your employers was no laughing matter,to be sure:

LOVE IS IN THE AIR

It wouldn't be a really great period piece without a romance or two and Downton has more than it's fair share of them.

Whether the mode is choosing to love someone not quite on your level(Mary & Matthew),holding a truly hopeless crush(Daisy & William,with Thomas to upset the works) or a budding relationship built on common interests(Lady Sybil & Branson),there was something for just about everyone here to root for and against.

One love story that all of us wanted to see happen was the growing connection between Mr. Bates and Anna. The injured in more ways than one valet and the lively yet sensible house maid have much to recommend to each other but a secret or two from his past keeps them apart. Perhaps by next season,these two sweet souls will find a way to have their two hearts beat as one:

YOU CAN'T KEEP A GOOD COUNTESS DOWN

One of my favorite characters in the Downton Abbey crew is Violet,the Dowager Countess of Grantham who says what she thinks when she deems it is proper to do so. Of course,being the Countess,Her Ladyship believes that anything she says and does is proper at all times.

Casting Maggie Smith in this role was a wonderful inspiration,as she brings all of her sharp thespian skills to the forefront and actually makes this determined to stay in the past yet reluctantly willing to deal with the new world springing up around her incredibly likable.

From wondering about the notion of a "weekend" to her swivel chair battle and primly telling her granddaughter that she should wait to get married before she has any opinions,Lady Violet comes across as a tough old gal who's seen much in her time and hellbent on sharing her wisdom with others,whether they like it or not. Kudos to Maggie Smith for making the Dowager Countess such a treasure to behold:

While it will be hard to wait for the next installment of Downton Abbey,our patience should be well rewarded. The revived Upstairs,Downstairs miniseries that Masterpiece Classic plans to air this April will ease some of the longing,I'm sure.

The Dowager Countess will not be the only lady whose company we'll be eager to keep in the second season but with any luck,some of them will be in better circumstances than when we left them. Regardless,an invite to Downton is certain to be a hot ticket item come this time next year:

I love your observations and choices. This series was such a delight. Evil villains, sibling rivalry, spite, murder you name it.

You are so positive - but I must always have my share of the conversation and found some faults too. This last episode was rushed and I felt cheated out of some great storyline expansions. Since screenwriter Julian Fellowes is pushing the pace past so briskly, one wonders if he will end the series after two seasons? We will probably see the ravages of WWI next which we know changed life in England incredibly. I have read that it not only killed all the men, but that it killed a way of life at big estates like Downton.

Thanks for your great insights Tara.

Thanks,Laurel Ann-it would have been nice to see the family spend Sybil's first season in London,I do agree.

WWI through the eyes of Downton Abbey should be interesting-I'm planning to watch season 3 of Upstairs,Downstairs which dives right into that subject. Wonder if Fellowes is or is not being influenced by that classic series?

Thank goodness for such smartly written shows that give us all much to talk and think about!

Happy to hear from you at any time,
Tara