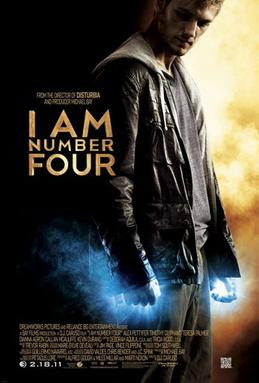 Making it's multiplex debut this weekend is I Am Number Four,another Michael Bay produced attempt at starting a financially successful movie series. Alex Pettyfer stars as the numerical lead in question,one of nine refugee space aliens who are hiding out on Earth until their mysterious powers fully develop.

As is the way of these things,our hero is beset with challenges both emotional(falling in love with a local girl)and physical(being the next in line for assassination by agents of the evil overlords who conquered their home world).

The reviews for this film are so far on the negative side but that probably won't affect it's box office take by much. This is a holiday weekend,after all,and any excuse to get out of the house is great for the target audience here. I also suspect that many adults will want to check this out as well,since the teenagers with super powers genre is suitable for just about all ages: 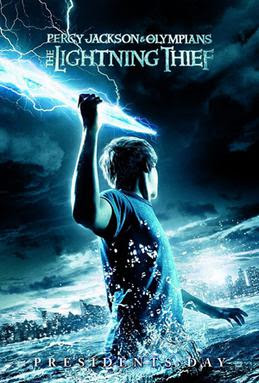 Around this same time last year,a similar teen fantasy movie was released and did reasonably well on it's initial outing. Percy Jackson & The Olympians:The Lightning Thief has much in common with I am Number Four;both are based on a tailored to teens book series and have young male leads who are forced in battle due to their biological connections.

The Harry Potter series manages to pull those mouthfuls off but it takes a touch of brevity to really make it work. Not that a snappier title would have it a better movie but every little thing counts when trying to launch a new film franchise:

Another component to the super powered teen flick is balancing the whimsy element within the plot and dialogue. Taking a not so serious approach to well known genre fare can be a welcome sigh of relief and add to the fun but like any other special ingredient,too much can completely overwhelm the final product.

While Disney's Sky High does have it's amusing moments like Lynda"Wonder Woman" Carter as the principal of the super hero high school or the whole first day screening of potential heroes and sidekicks,the movie feels too much like a pilot for a family friendly cable TV series.

Nothing wrong with that,mind you,but releasing this flick as a big screen production was like casting a sweetly small fish into an ocean of cinematic high expectations:

It would also be great if more of the these films had females at the forefront. True,the Hollywood version of Buffy the Vampire Slayer wasn't as smart or movingly metaphorical as it's later TV show adaptation turned out to be yet it did set the stage for younger women warriors to strut their stuff.

Hopefully,the dreaded upcoming reboot of Buffy will base their new tale of the Slayers more in line with the small screen edition rather than the charming but goofy original film. As it was with the first Buffy movie,Joss Whedon has little say in the matter.

If it was up to the fans,they'd prefer to stick with this early attempt than deal with a truly clueless rendering of their favorite heroine but the only thing that seems to drive away movie producers from pointless remakes is low returns at the box office. So,if worse comes to worse,at least we may have only one other big budget Buffy bomb to contend with:

Will this genre ever be more than simple popcorn movie fare? Everyone points to the Harry Potter series as the high water mark and while such standards are worth shooting for,some pop culture delights are hard to replicate on command.

The main reason that Harry Potter is so exceptional is it's uniqueness. Blending traditional story telling tropes with original concepts and characters is harder than it looks,a message that Hollywood doesn't seem to understand.

Nevertheless,there is still hope even in these weary genre waters. Judging a movie by it's trailer is about as savvy as doing so for a book and it's cover yet this teaser for X-Men: First Class does have a sparkle of freshness and energy that makes it a strong possibility for a decent superhero movie this summer.

Prequels tend to not be as good as sequels as a rule but the gang at Marvel are old hands at making everything old new again. With any luck, the super powered teen films of the future will strive to be Stan Lees instead of Michael Bays-it only takes one to lead the way:

I remember hearing that the book I Am Four was pretty good so I plan on at least giving that one a shot. I still haven't seen Percy Jackson though I adore the books. Sky High was cute but it did seem more like a Disney Channel original movie, didn't it? I refuse to see that version of Buffy or any reboot. They just can't do Joss Whedon's version justice... and that's saying something considering that no one ends up happy. *crosses fingers for new X-men*