Breaking through the backlash on Breaking Dawn 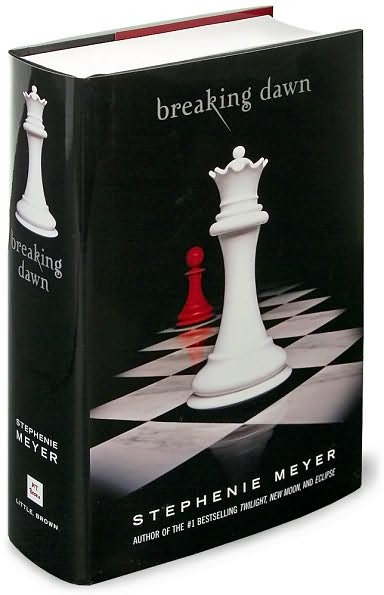 This morning,I finished reading the final chapter of Stephenie Meyer's Breaking Dawn,the last book of the Twilight Saga that has stirred up quite a bit of fuss and fury with many members in the devoted fan base. Spoilers about this book were posted around the internet in such a way that it was hard to avoid them,like dodging rain drops during a thunderstorm.

After hearing about some of them,I was expecting this book to be a real howler,sort of the literary equivalent of Glitter or Hudson Hawk(insert the film flop title of your choice);especially with many of the spoilers being used as fodder for parodies of the series. However,I'm here to tell you that,upon reading Breaking Dawn in it's entirety,that this is the best and most mature book of the Twilight Saga.

To explain my reasons for feeling this way,I'd like to go over a few of the complaints that have been expressed by fans and non fans alike. I don't intend to go through the whole book,point by point,or point fingers of blame at anyone. I just think that there's a need to clear the air regarding a few key bones of contention:

It's no secret at this juncture that Bella becomes pregnant after marrying Edward(and still being human during their honeymoon)and her unborn child causes her a number of physical problems,which makes Edward want to end the pregnancy in order to keep his new wife alive. She insists upon having the baby and after a very painful birth,is made into a vampire in order to survive.

Now,I'm not a big fan of the vampire baby concept(actually,in this case,Bella's offspring is more of a vampire/human hybrid,a daywalker if you will)but it has been done before and made to work. The third season of Angel dealt with this issue and it caused as much friction amongst the show's followers as it has with the Twilight folk.

The reasons behind the discord are rather different;where as Angel fans debated the mythos/plot logic behind that storyline,most of the negative feelings about the Breaking Dawn baby intro seem to be more of disgust. Many have called it a "Rosemary's Baby" treatment and find some of the descriptions of Bella's pregnancy woes to be gruesome.

People,as someone who has read a number of horror stories(including Rosemary's Baby),let me tell you,this is not as bad as you think it is. In fact,it's pretty PG-13. Granted,I have a higher tolerance than some for scary stuff but this material is handled in a very mild manner. Pregnancy is not always a tidy subject,even if you're having a human child,and keep in mind,this is a story about vampires and werewolves,folks. Like the hit movie says,there will be blood.

In my opinion,a real chunk of the reason that this irks so many people is that they prefer the romance of Bella and Edward(or Bella and Jacob,take your pick)over any of the realities of their life that they might have to face. In other words,babies aren't sexy. Another prevalent source of dissatisfaction is the notion that everything Bella wanted out of her new life comes easily to her,without having to make a major sacrifice. Lumped on top of that is the idea that Bella's concerns about dealing with her bloodlust as a newborn vampire turn out to be not so bad after all and is therefore a cheat. Dealing with part two of that,who hasn't had a major freakout about going into something that winds up working out better than you expected?

Also,Bella is not the only one who has to make difficult choices here;Jacob is faced with many life altering decisions that force him to grow up and see beyond his own emotional horizons(the Jacob sections of the book really make him a stronger character instead of merely another contender for Bella's heart). He makes a few sacrifices of his own that don't involve a big dramatic showdown. Not to mention that there is more than one way to make a sacrifice;Bella,at a crucial section of the story,has to consider and actually plan for the possibility that her child might have to go into hiding,to protect her from outside forces,and to never see her again. I won't say how that ends up,but just having to deal with such an option and be willing to go thru with it all the way is not a walk in the park,guys.

Meyers has used classic literature to highlight the themes of her books,like Pride & Prejudice for Twilight and Wuthering Heights for Eclipse. She's also included Shakespeare(Romeo & Juliet/New Moon)and in Breaking Dawn,cites Midsummer Night's Dream and most importantly,The Merchant of Venice. Both of those plays are thought of as comedies,with Merchant as more of a dramedy,and not tragedies. If you thought that Meyer was intending to put her characters into a sad situation of dark irony,you were sadly mistaken there.

WHAT IS THE MORAL OF THE STORY/WHAT KIND OF FEMALE ROLE MODEL IS BELLA?

These two queries I'm mashing together because they both come from some sort of concern that the Twilight series is not putting out the politically correct ideals that many people are determined to have made(a few of those folks are just as zealous about that as are the other side who oppose them to the hilt).

There are those who wish that Bella was more of a tough as nails,kick butt warrior woman like Buffy the Vampire Slayer was,for example.

Buffy,however,didn't start out as a fierce female-like Bella,she wanted to just be a "normal" teenager and have a carefree,clueless type of life. In the early seasons,she was torn between embracing her duties as a Slayer and pursuing her own interests,like cheerleading and being a prom queen.

In fact,Buffy wasn't even interested in going to college at first and was hoping for some kind of future with her vampire lover(something that Bella has been criticized for). It took time,many challenging experiences and the addition of a younger sibling to be responsible for that helped Buffy to reach the level of maturity that she did by the end of the show's run.

Part of the problem here is that Young Adult literature is solely intended to pass on lessons in morality to teens. Contrary to popular opinion,YA novels are not meant to be Afterschool Specials,no more than novels for adults are. Their purpose is to entertain their expected and/or unexpected audience of readers who take from it what they will. Stephenie Meyer herself has said she never intentionally wrote these books with YA in mind and encourages parents to be involved with what their kids read.

A major portion of this equation is that Bella is seen as a detriment to the feminist movement by not having a burning desire to attend college and focusing too much attention on her love life. Ladies,let's be real;plenty of young women at that age(late teens and upward)are all about the guy in their life. It may not be what you would like to see promoted as part of a modern woman's reality but realistic it is.

Stephenie Meyer discusses this notion at her website and she speaks about this issue in better words than I can use to defend her. Here is some of her response:

One of the weird things about modern feminism is that some feminists seem to be putting their own limits on women's choices. That feels backward to me. It's as if you can't choose a family on your own terms and still be considered a strong woman. How is that empowering? Are there rules about if, when, and how we love or marry and if, when, and how we have kids? Are there jobs we can and can't have in order to be a "real" feminist? To me, those limitations seem anti-feminist in basic principle."

I wholeheartedly agree with that. If Bella is not your cup of tea as a heroine,that's fine-just don't write her and the author off as a pair of pandering girlie-girls. As to the influence on young people,I like to give them a bit more credit for knowing the difference between the real world in which they live in and the fictional realm that a book takes them to.

As I said in an earlier post about Breaking Dawn,not everyone is going to walk away from the end of this,or any other series,a perfectly happy camper. In time,I believe,this book will be better appreciated and accepted by many more readers as well as enjoyed by those who will discover the world of Twilight on film. One thing that we all can agree on is this:Bella may not be a Xena type of girl but she does strongly and boldly walk to the beat of her own drum:

Buffy,Walk The Walk
Posted to WhedonTube by noitis_il on August 25, 2008

Hey Lady T!! I tagged you on a meme. You can check it out at:

I hope you are doing well and having a lovely week!!
XO-K