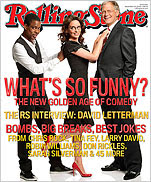 Talking about what tickles your funny bone seems to be the big thing at the moment(the way the world's going,a good laugh is seriously needed)in the pop culture world. Rolling Stone just put out a huge issue devoted to humor,which inspired the NYT book blog to make a list of the funniest novels ever.

Now humor is very subjective-what cracks one person up would make another stare at them with confusion and/or the urge to slowly step away. For example,I find it hilarious when General Zod in Superman II says "Lex Luthor,ruler of Australia.."during a big scene that's not meant to be funny at all. Nonetheless,that minor bit of dialog gives me the giggles.

Even tho we all don't find the same things to be funny all of the time,laughter can still be a unifying force that brings folks together. With that in mind,I'd like to share with you some of my favorite funny pieces of pop culture and hope that some of them might amuse you,too:

This odd as a cod comic book farce has slowly become a cult movie fav with many people,growing in strength with the rise in quality from superhero films. I fondly recall seeing this flick in theaters and still finding it as funny as the day I first saw this sucker.

There are many,many reasons that Mystery Men makes me laugh but a key one is that it's the last movie that I found Ben Stiller to still be funny in. Stiller has lost his comedic charm for me over the years(I only laughed once during There's Something About Mary)but here,he's dead solid perfect as Mr. Furious,the determined to be taken seriously antihero with the lame witticisms and need to start bickering with The Bowler(Janeane Garofalo)like a pair of fifth graders.

My favorite Mr. Furious moment is when he stomps atop of Casanova Frankenstein's limo,screaming "The roof,the roof,the roof is on fire!" We may need no water but I need to take a breath in between chuckles when that happens:

One of the best made films in the Coen brothers oeuvre, Raising Arizona has much to offer to the comedy connoisseur. Yet,if I had to pick just one bit of that particular stew to savor,it would be the botched robbery section where H.I. reverts to his criminal ways,with newly stolen son and former law abiding wife waiting in the car for him.

Once his beloved bride realizes what is up,the whole deal snowballs into a frenzied chase sequence,which is played out without overhyping the onscreen antics(the theme music in the background sets the offbeat mood)and resulting in an unusual moment of personal victory:

A classic episode of Friends is the one where Ross looses his mind over his turkey sandwich being snatched up by one of his museum co-workers(the man loves his moist maker slice!)and while I enjoy that,along with the subplot about Rachel and Phoebe taking a lit class together,the strongest thread in that silly story line are the constant moments of embarrassment that Joey has to put up with,in order to help Monica and Chandler conceal their budding romance from the rest of the group.

It all comes to a breaking point,where Joey gets the chance to be clever for once and turn the tables on his insistent pals who would rather have him be thought of as a sex addict than tell the truth. My favorite line has to be where Rachel freaks out and says"He eats chicken and then he looks at us!":

The formidable Emily Gilmore has very few things that strike her heart with fear,the biggest one being her verbally vicious mother-in-law,Trix. Trix is doted on by Richard and amusingly admired by her granddaughter Lorelai,mainly for the mere fact that sound of Trix's voice sets her controlling mother off into a frantic frenzy of appeasement.

Lorelai does take pity on her mom at one point during a particularly trying visit and offers Emily some advice on how to deal with Trix;find a way to make her eternal displeasure funny. Emily tests this theory out at dinner(rigorously timed by Trix's standards)and achieves instant results,along with praise from her daughter:

Let me end this piece with a clip of a new favorite of mine,the recent SNL opening skit with Tina Fey as Sarah Palin and Any Poehler as Hilary Clinton. I haven't watched the show in years,finding less and less to find funny about it over time. While I didn't see the season opener last weekend,this bit has been making the rounds online and making me literally laugh out loud.

The best part about it is that it mocks both ladies exceedingly well. Political humor gets dated faster than milk can expire,most times,and is usually one sided. With such a major league election coming up,it's good to have some laughs on both sides of the aisle,for a change: